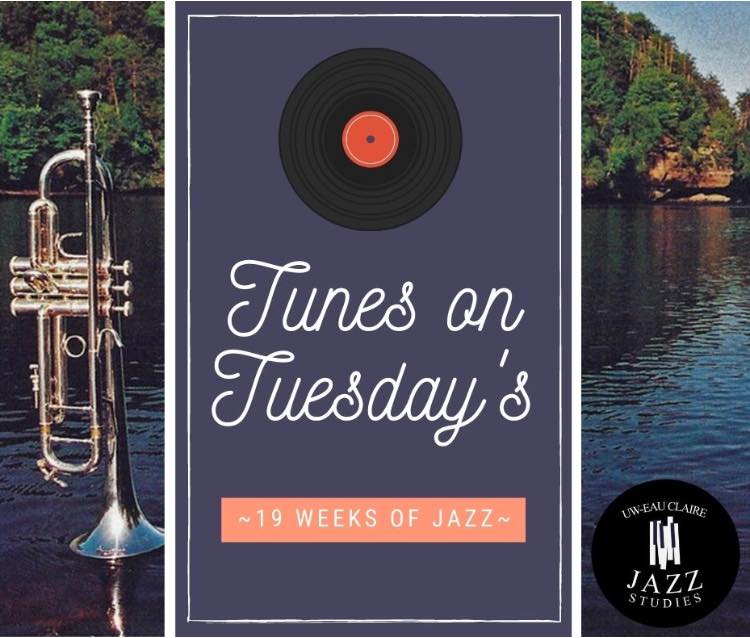 On the 21 different CDs produced by the jazz studies department, there were former jazz students' recordings starting back in 1993, where they created covers of other songs throughout the years.

When UW-Eau Claire shut down last spring, students continued the semester online from the comforts of their own homes. Coming into the 2020 Fall semester, some classes could function face-to-face, while others functioned online in a hybrid format.

UW-Eau Claire is still unable to hold a large majority of in-person events, but is working to shift as many programs and activities as possible to an online platform.

One new addition to online programming is Tunes on Tuesday’s, which is put on by UW-Eau Claire’s jazz studies department. Every Tuesday morning at 10 a.m., one to two different jazz tracks are uploaded to their YouTube channel.

John Francis, a third-year student intern, business administration and music student, came up with an idea leading to the development of Tunes on Tuesday’s.

“Last spring, before COVID-19, we were brainstorming on how to really showcase the amazing jazz program we have at UWEC,” Francis said. “I recalled the jazz area releasing 21 albums since 1993 and thought it would be a cool idea to make them public on the internet so everyone would have the chance to listen to them.”

On the 21 different CDs produced by the jazz studies department, there were former jazz students’ recordings starting back in 1993, where they created covers of other songs throughout the years.

Robert Baca, professor of trumpets and director of jazz studies, is one of two other people alongside Francis making Tunes on Tuesday’s possible.

While Francis developed the idea and had burned the 21 CDs onto a computer, Baca’s role is to select the tracks uploaded onto the YouTube page every week.

“Take one to two songs from the CD, put them on the YouTube channel once a week and now people can hear what some of the various generations of jazz students have done over the years,” Baca said.

As the idea for Tunes on Tuesday’s came along, one other intern worked with both Francis and Baca. Amber Scharenbrokh, a student intern, was in charge of creating or scanning in the art for the album cover.

With the jazz department carrying on with Tunes on Tuesday’s, this programming’s future as of right now is done after 17 weeks, on Jan. 19, 2021.

“Even after the posting stops, I hope that the legacy of the great groups we have had at the university over the years continues well into the future,” Francis said.

For more information about the jazz studies department, go to their facebook page to get reminder posts about Tunes on Tuesday’s and see other programs within the department.