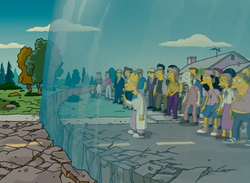 In this week’s edition, “The Simpsons Movie” explores a unique situation. Although the film does not follow a pandemic, a town-wide quarantine is featured in the film.

Following a multitude of terrible decisions from Homer, Springfield’s water supply is contaminated. This environmental catastrophe grants Springfield the top spot on the Environmental Protection Agency’s most contaminated cities list.

President Arnold Schwarzenegger is given five different options. Without consultation or information, he chooses the third.

This option places a giant dome over the entire town, preventing anything from entering or exiting the premises.

After an angry mob creates destruction and hilarity, the Simpsons escape to Alaska. They then learn from a Tom Hanks-endorsed commercial that Springfield will be blown up, creating a “new Grand Canyon.”

The Simpsons fail to save the town several times before they eventually succeed.

With an outlandish plot and little-to-no character development, the film is far from a cinematic masterpiece.

In many ways, the movie’s purpose is clearly to capitalize on the famed series and increase Fox Broadcasting Company’s revenue.

Thankfully, the writers, realizing this, relentlessly and gratuitously poked fun at the concept of a movie conceived from a successful television series.

From the first animated frame to the credits, meta jokes and fourth wall breaks are riddled throughout the nearly 90-minute run time.

At the opening of the film, we see Itchy and Scratchy, the fictional television show within “The Simpsons” universe.

Their adventures are interrupted by Homer standing up, revealing a movie theater, loudly complaining about paying money for something available at home for free. He then points directly at the camera, calls the viewer an idiot and then the famed intro rolls.

Although the movie was not good in a traditional sense, it did a spectacular job being what it was supposed to be.

The plot was confusing and convoluted, thriving only due to the almost two decades of weekly programming that preceded it.

As with a majority of work “The Simpsons” released to the public, things such as narrative and detail are trivial. The joke writing is where the writers thrived.

Jokes were crammed into what felt like every single line of dialogue. Marge and Lisa acted as the somewhat serious (or straight) characters, but even they had their moments. Marge delays her escape from a burning building to wash a dish left in the sink. Lisa asks an Irish boy who was passionate about the environment if his dad was Bono.

The points where the film might have been disappointing were made up for by countless moments of witty animation or writing.

The jokes certainly took full advantage of the PG-13 rating. On the surface the series and movie are identical, but the film version is a more risque, edgy rendition of all the classic characters.

Although I rarely seek out “The Simpsons,” I often enjoy watching the program when I stumble across it. It is fitting that one of the most memorable shows of my childhood forced me to produce my first arguably positive review.