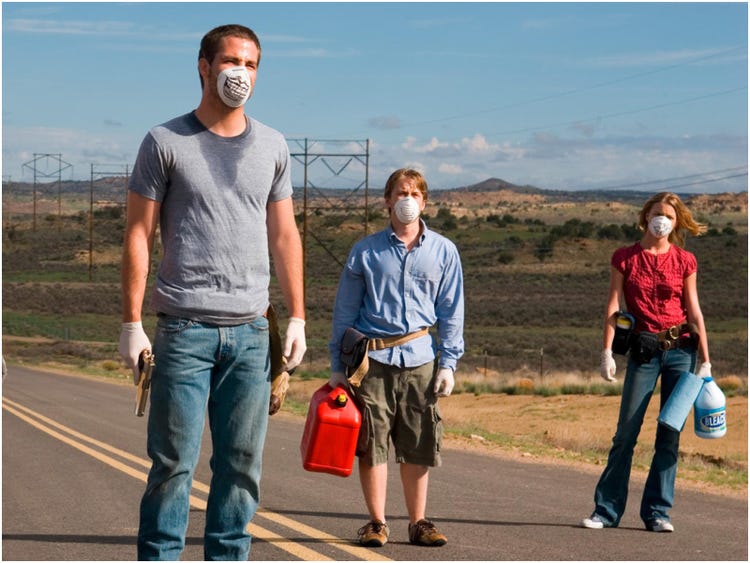 The audience is expected to care about what is going on in the film without a compelling reasons to do so.

As the current pandemic continues, I still continue to binge on movies and shows. “Carriers” is the latest on my list.

The 2009 thriller follows four friends as they travel toward the Southwestern coast of the U.S. as they seek refuge from a virus that has apparently taken over the world.

Danny, played by Lou Taylor Pucci and Brian, played by Chris Pine, are brothers who committed to get themselves and their other two friends to their childhood vacation spot.

In my experience, a lot of films from the 2000s follow a predictable and bland, regurgitated theme.

Many aspects of the film — from the plot and characters to the shot style — were reminiscent of practically every other horror and thriller movie from that era.

Brian is the tough, moronic de facto leader of the crew. This means he drives the car, carries the gun and is very outspoken.

Danny is the smart-but-timid and sensitive younger brother, who constructed a lengthy list of rules the group is supposed to follow.

I found myself unable to become invested in “Carriers,” largely in part to the despicable lack of character development.

Brian and Danny are brothers who used to go to the beach and Danny got into Yale. These are the only details shared about them.

Bobby and Kate are basically placeholders, lacking in personality and individuality. They spend their fair share of time on the screen. Yet, only about 60 seconds of their screen time is important to the plot.

The film informs us through subtle contextual details that Kate was somewhat of a stranger to the rest of the crew. Other than her wealthy family and golf skills, I know nothing about her.

The film almost felt like a sequel. No explanations of who anyone was, how they got where they are or why we should care about them was ever offered.

The audience is expected to care about what is going on in the film, with no compelling reasons to do so.

A majority of the film was spent with the four main characters in various automobiles nearly running out of gas. They are forced to take gas from other travelers.

With a runtime less than 90 minutes, most of which was wasted with repetitive arguments that didn’t push the plot forward, it comes as no surprise that the movie was uninteresting and incoherent.

It may be due to the dialogue and lack of character development the script seemed to present, but none of the acting stood out to me as impressive.

Although my opinion is that the movie was almost entirely unappealing, they were not far off in some of the details of a pandemic.

The main characters witnessed a scene that could be graphic and offensive to some, blaming a specific racial minority for bringing the virus to the U.S.

During a few of the drawn-out, time-wasting car scenes, the main characters referenced people stockpiling in their homes and a quarantined cruise ship.

“Carriers” received a 6 out of 10 on IMDB and a 67 percent rating on Rotten Tomatoes. This was generous in my opinion, as the film appeared to be mostly a cash grab trying to capitalize on Chris Pine’s then-recent success in the “Star Trek” series.

Johnson can be reached at j[email protected].