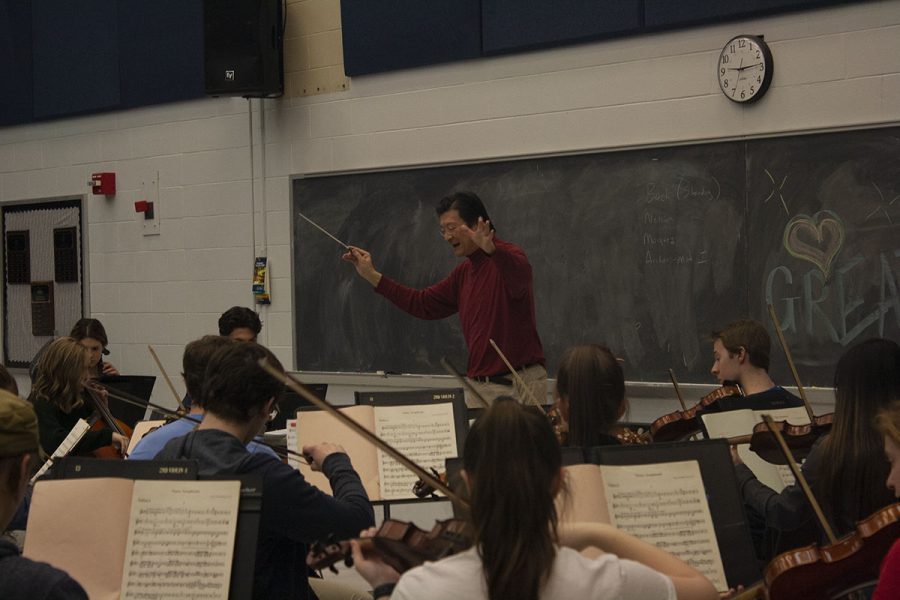 “I feel incredibly honored that my achievements here have been recognized on a national level,” Yasuda said. “It’s an amazing opportunity to work with such talented young musicians.”

Yasuda said there was no application process and that he received the invitation to lead the orchestra out of the blue.

He is excited to dive into music-making with these musicians who auditioned for the opportunity to rehearse and perform in this event, Yasuda said.

“The news came as a big surprise,” Yasuda said. “This is one of the highest honors I’ve ever received.”

Yasuda is originally from Takarazuka, Japan and started playing the violin when he was just three years old.

He said that at first his parents did not want him to pursue a career in music because there was no guarantee for success.

“My parents sensed that my love for music was strong,” Yasuda said, “I decided to prove it to my parents by practicing up to 12 hours a day, I was obsessed with becoming better and better.”

Being a part of an orchestra as a student and working with different conductors made Yasuda build his own character and decide what kind of conductor he wanted to become.

“In college I joined a symphony orchestra and I was blown away by the power of music,” Yasuda said. “During that time I realized I wanted to become a conductor myself.”

Twenty-nine years ago, Yasuda became the orchestra conductor at UW-Eau Claire and he remembers the hiring process very vividly.

“I learned about the position one day before the deadline. I quickly gathered all of my application documents, but I didn’t have a videotape of me conducting,” Yasuda said. “They extended the application deadline, so I had time to ask my friends to form an orchestra for my audition tape.”

During the interview, Yasuda had to do a recital and conduct an orchestra. After just 15 minutes, he was asked to stay. He immediately said, “yes.”

Since that day, Yasuda has inspired many students. Emma Campbell, a second-year violin performance student, is one of them.

“I came to UW-Eau Claire solely because of Nobu (Yasuda),” Campbell said. “Eau Claire was not my top choice, but after walking out of my first lesson with him I knew this is where I wanted to go to school. I immediately knew I wanted to learn from this professor.”

The main focus of Yasuda’s work is figuring out how to help his students to become better musicians.

The students know how hard they have to work in order to succeed both individually and as an ensemble, he said.

“I come to the podium with one vision: to work with my students through the power of music,” Yasuda said. “I’m so passionate about music and I know my students are too, so it is the only thing I need. I just bring my energy to the rehearsal and they respond.”

Yasuda said there are moments when he is frustrated, but only because he knows his students can do better and what they are capable of. He said there is always room for growth and he wants to inspire others to strive for the best results.

“I’m lucky that even after 29 years, I still enjoy what I’m doing and have the same focus and energy that I had when I started,” Yasuda said. “A lot of people are surprised how I can keep the same energy for that long in the same place, but to me every day is different and brings new challenges.”

Campbell said Yasuda encourages his students to listen to what others within the orchestra are playing, rather than only focusing on one’s own part. That encouragement helps to become a stronger ensemble and to be unified as a group, she said.

“Some of my favorite musical memories are in that orchestra,” Campbell said. “He (Yasuda) just represents what a good conductor should be. Somebody who is dedicated to his students, dedicated to the score and dedicated to doing everything to guide his students.”

Sam Lakmann, a second-year music composition student, first met Yasuda when he came to his high-school as a guest conductor. He said that he was immediately inspired by Yasuda’s eccentric character.

“He (Yasuda) always has such an insightful knowledge of the material we are working on,” Lakmann said. “He comes so prepared and manages to inspire a broad range of people at the same time.”

Dedication, positive thinking and focusing on one’s dreams defines his overall mindset towards success and happiness, according to Yasuda.

Yasuda said he knew he was a conductor long before he actually became one.

“You have to decide what you want to achieve and believe it’s going to happen,” Yasuda said. “It is like a positive domino effect going upwards. The recognition I have gained is a result of everything that came before this moment and I simply focused on what I was the most passionate about.”

Klavina can be reached at [email protected].