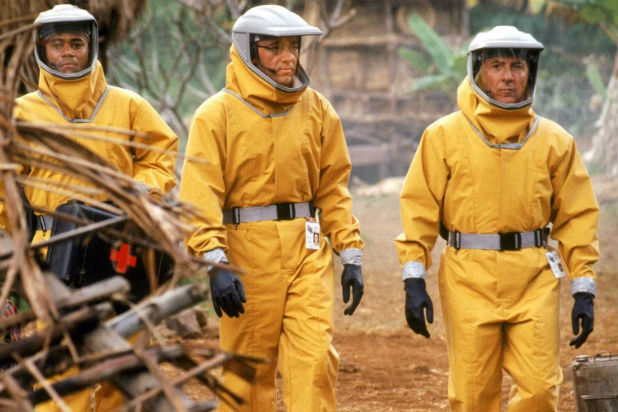 "Outbreak" was directed by Wolfgang Petersen. It was released in 1995.

As enjoyable as watching horrifically bad romance movies is, I would be remiss if I failed to acknowledge the times and explore films related to our situation.

“Outbreak” was released in 1995 and covers a plot eerily reminiscent of the world’s current predicament.

Armed with a star-studded cast and a lot of explosions, helicopters, guns and hazmat suits, “Outbreak” depicts a dangerously contagious virus that found its way from Africa to the fictional suburban town of Cedar Creek, Calif.

The military is willing to lie, waste ammunition and kill to cover up the virus rather than allow the CDC a chance at saving the town.

The film was made in the 1990s but has the ingredients of a bad 1980s action flick. There’s a former love interest working alongside the manly man main character, a whole boatload of suspenseful music and an insurmountable special effects budget.

Entertaining, yet simple and predictable, “Outbreak” feels dated, but not only due to the lack of gray in Morgan Freeman’s beard. The stylistic choices the film made did not age well.

The dialogue was well-written and the producers got their money’s worth out of the expensive cast, but the film lacked character.

On a slightly unrelated note, I have a confession to make.

I am not entirely sure that Morgan Freeman is as amazing of an actor as his reputation claims.

I —seemingly like every American — feel euphoria every time I see Freeman on the silver screen or hear his smooth, deep voice narrating a situation. He is undeniably an American treasure.

His voice is the eighth wonder of the world, yet I have never seen him play any role in a different way.

Similar to Mark Wahlberg, Seth Rogen and others, I believe Freeman may be an actor who is beloved for the sole reason of being himself on screen, regardless of who the character is.

It may be blasphemous of me to doubt a man who has played God on two separate occasions, but “Probably negative reviews” is about honesty and integrity.

After potentially ruining my chance of ever being a Hollywood star, or showing my face in public again, back to “Outbreak.”

The style of shots, alongside the generic soundtrack, lacked originality, even during the time period the film was released. More attention was spent on how big of names they could acquire and how many poorly done CGI explosions occurred than the plot.

If I were to sum up the plot in a word, it would be “corny.”

The military wants to do a bad thing, but some people successfully stop it. That is pretty much it.

The way the virus made its way to the United States was through a monkey, that Jimbo Scott, played by Patrick Dempsey, had stolen.

If I find out Dempsey has COVID-19, I will be extremely suspicious.

Dempsey released the monkey into the world and pandemonium ensued.

In my opinion, love interests in action movies are unnecessary and lazy.

If someone is making a thrilling, suspenseful action film and feels the need to add a love interest to better captivate the audience, the plot needs work.

On top of that, the film was nothing like a real pandemic. Unless, of course, we’re all being lied to and COVID-19 is a slow-moving, relatively ineffective military weapon gone awry.

Also, there was not nearly enough stockpiling of hand sanitizer and toilet paper.