‘Sierra Burgess is a Loser:’ yet another dull Netflix Original movie 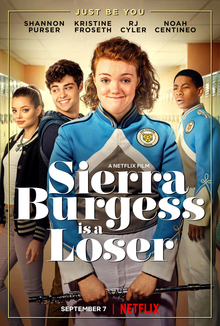 Like many movies before it, “Sierra Burgess is a Loser” depicts a caricature of high school.

Band kids are losers, cheerleaders and jocks are cool and people are horrendously mean to each other.

Sierra Burgess, played by Shannon Purser, receives a text from a stranger named Jamey, played by Noah Centineo. Jamey thinks Sierra is Veronica, played by Kristine Froseth, the head cheerleader and “most popular girl in school.”

Burgess proceeds to promote this falsehood, even getting Veronica in on it. Jamey goes on dates with Veronica, they Facetime and even kiss before the big game.

Meanwhile, Jamey would return home to text or call Burgess, still believing it was Veronica.

This movie is incredibly dull. Every plot-shifting moment was visible from miles away.

I do not care if a movie is geared toward middle or high schoolers, I should not know exactly how the movie is going to end 20 minutes in.

Burgess alienates her only friend, Dan, played by RJ Cyler, in pursuit of Jamey. Veronica and Burgess become unlikely friends, until Burgess exposes a secret on social media.

Burgess goes against her overly supportive parents and yells at them because they do not know what it is like to be unattractive in high school.

A common theme I have noticed in Netflix Original movies is self-centeredness. Most young people I know are incredibly self-centered, but Netflix plots reward this behavior.

The moral of “Sierra Burgess is a Loser” is: If you think only of yourself, treat your loved ones like garbage and get mad at the world because you are not popular or classically good looking, everything will work out exactly how you wanted it to.

To be fair, she did write a song. Maybe the true moral of the story is that bad behavior can be cool, as long as a big gesture immediately follows.

“Tall Girl” and “After” follow this same credo. These three movies rip off John Hughes while simultaneously promoting this ridiculous message.

Outside of yet another outrageous Netflix plot and center conflict, the movie was insanely boring.

If I wanted to watch immature people ignore responsibility and human interaction while fiendishly texting, I would hang out with my middle schooler cousin more often.

So much of this movie was spent bouncing back and forth between Burgess and Jamey alone in their rooms texting. I understand incorporating technology and modern society into a movie, but this was excessive.

The simplicity of this movie was borderline offensive.

Veronica is the rude, insulting head cheerleader who is obsessed with boys and is faithfully followed by a posse of shallow, undeveloped filler characters.

Burgess and Dan are the “rejects.” Band kids who get good grades and read as losers in the “Sierra Burgess is a Loser” universe.

Jamey goes to a different school but falls within yet another stereotypical high school archetype.

Jocks are not just athletic morons — I am aware of this — I think most people who exist in reality are aware of this.

However, Netflix has beaten the deep-thinking jock role into submission so many times I long for the days when movies used jocks as nameless antagonists, knocking books out of “nerds” hands and shoving people into lockers.

Noah Centineo is not a terrible actor, but I have only seen him typecast into this role. I hope for his sake Netflix creates different roles that necessitate a handsome tan guy because I am sick of seeing him play the same role again and again.

In essence, “Sierra Burgess is a Loser” is about insecure teens who text too much and are dishonest with those around them.