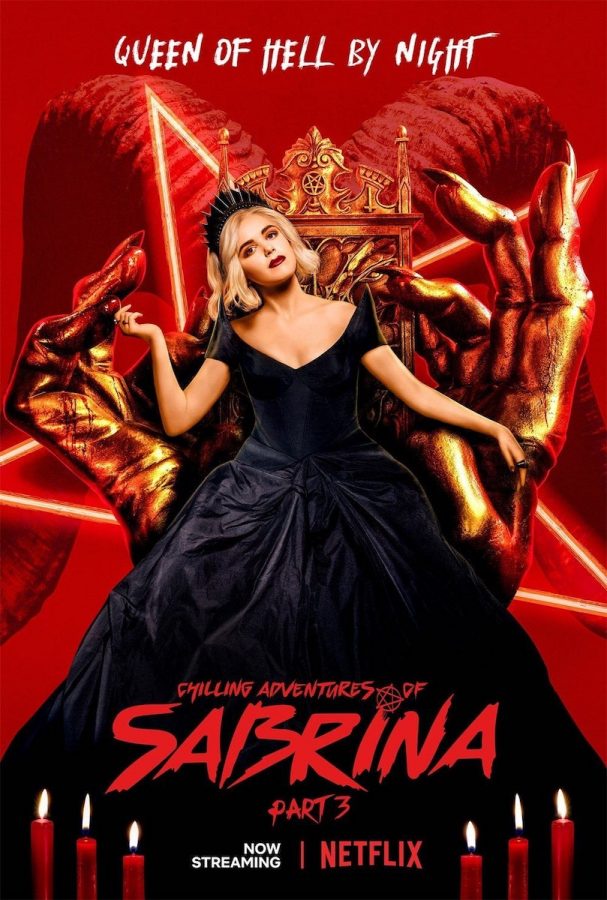 “The Chilling Adventures of Sabrina: Part 3” dropped hints about what was to come with many promotional posters.

Winter break is the perfect time to catch up on those Netflix shows sitting in your watch list for ages. It is also the perfect time for Netflix and Hulu to release new seasons of the shows you have been waiting for.

“The Chilling Adventures of Sabrina: Part 3” was released on Netflix on Jan. 24 and though I was originally annoyed it was so late into winter break, considering I finished all eight episodes in a day, my annoyance was completely unnecessary.

“The Chilling Adventures of Sabrina” is based on the “Sabrina the Teenage Witch” comics, much like the television adaptation I grew up on, starring Melissa Joan Hart.

However, this adaptation has one stark difference to the 1996 version.

This show is dark. Its genre is horror. Netflix describes it as “chilling” and “scary.”

I’m usually not one for horror movies or shows — I mean, I watched “Stranger Things” and then couldn’t sleep for a few days — but for some reason this show is different.

In part one of the series, Sabrina must decide if she is willing to sign her name in The Book of the Beast to go through with her “dark baptism” and become a full witch, but her choice is complicated due to her being half-mortal and having made deep connections with her group of mortal friends.

In part two, Sabrina embraces more of her life as a witch and leaves her mortal school to attend The Academy of Unseen Arts, which leads to an abundance of drama as she finds her way. Sabrina and her mortal friends also discover a prophecy stating she will lead the apocalypse at Satan’s side. While trying to stop the prophecy, she instead brings it about and brings Satan to earth.

Once Satan is in Greendale, he proceeds to tell Sabrina he is, in fact, her father and that she is destined to be the Queen of Hell.

Once again, it is Sabrina’s ties to her mortal friends that inspire her to forge a plan to stop Satan from bringing around the apocalypse by trapping him in someone else’s body — Sabrina’s warlock boyfriend, Nick.

Part three kicks off with Sabrina trying to get Nick back. She succeeds, but she also ends up accepting her role as Queen of Hell. More troubles ensue as pagan witches enter Greendale and attempt to resurrect their oldest god, The Green Man.

Sabrina is continually tested through all three seasons by having to decide between her family, her mortal friends and her destiny. This season, her choices almost bring about a different apocalypse related to the Pagan witches succeeding.

Part three seems to be the best one yet, with Rotten Tomatoes giving it 92 percent and critics cheerfully explaining how this one is far better than Part 2.

“Benefitting from a vast step up in quality on almost every level, a strong ensemble cast who have grown into their roles, and a creative vision that finally feels like it’s been given full reign, this season of Chilling Adventures of Sabrina is easily the best yet,” journalist and critic Rosie Knight said.

Knight also notes how many tropes were used throughout part three, and I have to agree with her. It was the tropes and the references to real English witch trials from the 1600s that really made this season special.

Some critics have related the teen drama aspect of the show to Riverdale and, though I can’t speak to the comparison, I think one aspect continually making this show shine is the deep connections between the teen characters who are trying to both care for each other and save the world.