Travel into the Gamerverse with this year’s Cabaret production 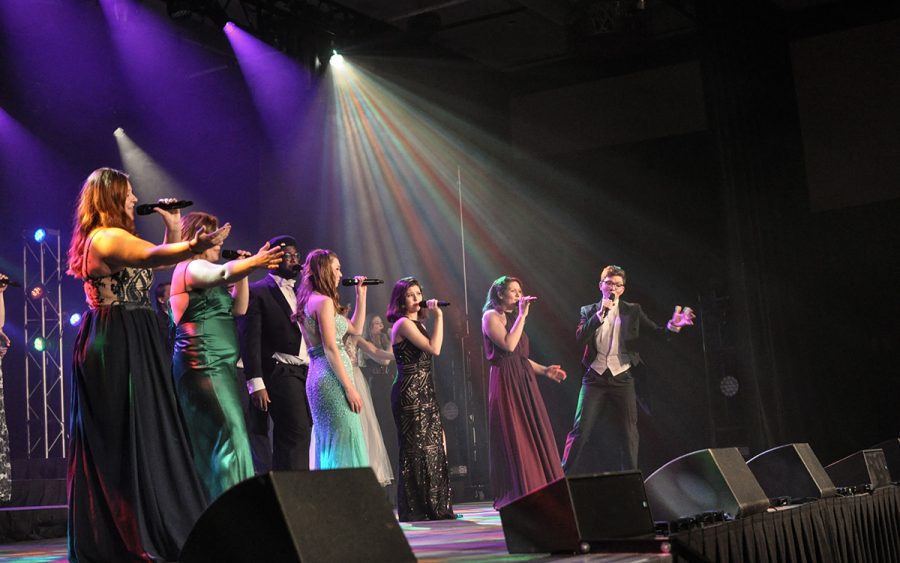 Executive Director Frank Watkins says everything from the script and choreography to the tech work and beyond is student-produced. “Cabaret: ‘Game Over’” will show again next weekend.

Through choreography, lighting and songs, “Cabaret: ‘Game Over’” shows what it’s like inside the video game universe, aka the “Gamerverse.” Popular games come to life, like “Dance Dance Revolution,” “Super Mario” and “Pac-Man.” A few board games are included too: “Pretty Pretty Princess,” “Battleship” and “Clue” are all portrayed on stage in the Ojibwe Ballroom.

The production is student-run, said Frank Watkins, the executive director. From the script and choreography to the tech work and beyond, students in the Department of Music and Theatre Arts share the experience of putting together “Game Over.”

The journey begins when two friends named Erin (played by AJ Wielichowski) and Sam (Sarah Ludin), are at a video game store owned by Mr. Williams (Sam Roach). Erin’s older sister, Ashley (Carley Conway), comes to the store to pick up Erin and Sam. The girls start bickering and Mr. Williams asks them to play his new game before they leave, sending them to the Gamerverse.

As they enter the Gamerverse, Erin, Sam and Ashley face different challenges through their favorite games. By solving these obstacles, they discover the importance of friendship, understanding one another and trust.

To help illustrate the games, songs from over the years are performed by UW-Eau Claire’s choirs. Starting the show were the songs “I Wanna Dance with Somebody (Who Loves Me)” by Whitney Houston, “Boogie Shoes” by KC and the Sunshine Band and “Blame it on the Boogie” by The Jackson 5. These songs capture the fun and high-energy video game “Dance Dance Revolution.”

Later in the adventure, Erin, Sam and Ashley are brought to the board game “Clue.” The Women’s Ensemble brings these characters to the stage.

Claire Karges, a third-year communications student, said it is her favorite set to perform.

“It is kind of character-driven, so we get to dress up with certain accessories for the different characters,” Karges said. “It is fun and it’s got a good energy.”

The Men’s Ensemble have their time to shine during the “Dungeons and Dragons” set, which Thomas DeLapp, a first-year undeclared student, said is his favorite set to perform because of the choreography.

The performers were not the only ones who enjoyed the show last Saturday. The hallway filled with family and friends who congratulated the performers after the show.

Anne Blaedow, a mother of a performer, said she thought the show was well-thought-out, well-planned and funny.

“It’s a great opportunity for people to come see what they do here,” Blaedow said.

“There’s a huge ensemble, cast and crew. I think it’s exactly what they should be doing at school.”