Skateboard shop owner has a mission to encourage others 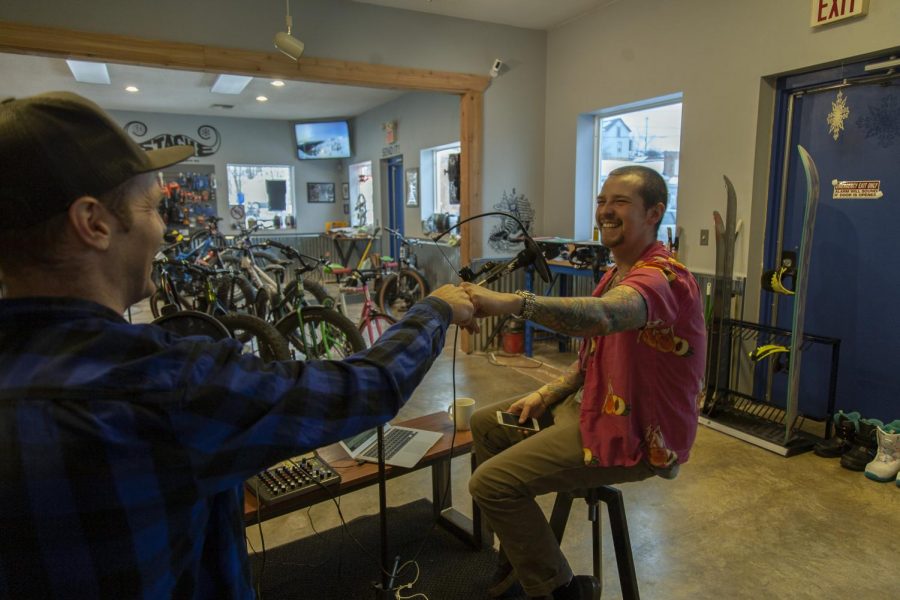 Nick Berry (left), the owner of Stache Bike & Adventure, will appear as a guest during season two of “Passion Pod."

Apart from running the Passion Board Shop in Eau Claire, Chris Johnson hosts his own podcast called “Passion Pod.” The first season of “Passion Pod” aired in November 2019, featuring 10 episodes of conversations with guests pursuing careers based on their passions. The second season airs at 7 p.m. on Feb. 26. on Converge Radio.

Johnson opened his shop in 2014 when he was 23 years old, pursuing his biggest passion: skateboarding. After being in the business for almost six years, he said he wanted to branch out and do something that would be a new adventure. Johnson said he was a guest on a skateboarding podcast a couple of years ago and the experience inspired him to host one of his own.

“It felt very natural from the beginning,” Johnson said. “I had a very strong desire to accomplish something specific with the show and I felt I had the resources to make it happen. I listen to a lot of podcasts and I have not found anyone else doing it.”

Having a background in sales and business allowed Johnson to understand how to create a product and its brand before releasing it to the public.

Johnson said he had a solid idea of where he wanted each episode to go and the order of the guests coming on the show. He also sits down with guests before interviews to make sure everyone is on the same page about everything.

Beyond the technical side of “Passion Pod,” Johnson wanted to meet and connect with people from different backgrounds, which made the podcast more diverse.

“I didn’t want to do a project that was just business, I wanted it to be an adventure that inspires other people to do things they want to do,” Johnson said. “I wanted to make connections with people personally and becoming friends with them was really important to me.”

Johnson has been through the struggles of pursuing his passion as a career, he said, so the podcast explores how it happened for other people. The guests come on “Passion Pod” with different experiences and Johnson asks them questions that an average listener would be interested in. It creates a conversation which can be shared by many people.

“That is the beautiful part about it, I do not try to make the show about how they’re doing it, but more about why they have chosen their career paths and what makes it worthwhile,” Johnson said.

When asked about his favorite episode from the first season, Johnson said Gabriel Fischer, an artist and a guest of episode five, inspired him the most.

Fischer inspired him to start painting and since then Johnson has been doing it every single day.

“Passion Pod” also features music picked by the guests. Johnson said he encourages people to listen to the show on Converge Radio.

He said by listening to somebody’s song choice, people connect with the guests on another level and learn something beyond their story.

The second season will have more variety and more guests from other parts of the country, including Santa Cruz, Mountain View and Los Angeles, Calif. Some of Johnson’s guests will still be from Eau Claire.

Matt Schwahn, the owner of Northbound Supply Co. and Honest Roast Coffee, has been playing “Passion Pod” in his shop every Friday since it first aired. He also appeared as a guest on the podcast.

“Chris (Johnson) has always been a good advocate for local businesses and we first met when I opened Northbound Supply about two and a half years ago,” Schwahn said. “I had played all of his episodes in my shop and it seemed like an obvious choice to have me as a guest on the second season since I am running two local businesses.”

The overall message Schwahn tried to get across in his episode was to inspire people to do things they are compelled to do.

“There is a lot of social construct that prevents people from pursuing their passions and the podcast is a great resource to encourage and connect people,” Schwahn said.

The main piece of advice Johnson said he gives to anyone who is struggling to find or pursue their passions is to plan for tomorrow but live for today. He motivates people not to get too caught up in future plans and live for their passions now and today.

The first season of “Passion Pod” is available on Apple Music, Spotify and other streaming services.

The show will also play at Northbound Supply Co. every Friday starting at 1 p.m. on Feb. 28. The store will offer some drink specials throughout the event.

All episodes will be available on streaming services the Monday following their airdate. For more insight and information, listeners can follow @passion_pod on Instagram.