‘The ColorBlock’ will be on the 600 Block of South Barstow in downtown Eau Claire. 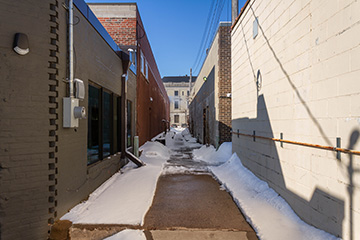 Local artists will create over 50 murals in what is currently an empty alley in downtown Eau Claire. Work on the murals will begin June 2020.

Local artists will create over 50 murals in what is currently an empty alley in downtown Eau Claire.

“The ColorBlock,” which was created by Sculpture Tour Eau Claire, is a project made with the intent to “revitalize and beautify” the downtown area, as well as to educate and inspire the community. Work on the murals will begin June 2020.

Sculpture Tour’s website says the organization creates a public art exhibit through placement of original sculptures along the streets of downtown Eau Claire. The art is exhibited for 11 months and the artists are paid a stipend for their work. All sculptures are also offered for sale.

The Sculpture Tour has had 53 sculptures, making it the second largest tour in the nation. They were also voted No. 1 in Volume One’s “Best of the Chippewa Valley” survey for Public Art Exhibit seven years in a row.

Tommy Rada, also known as “Enamel Hands,” is a street art advisor for The ColorBlock. He said he has been painting since the early 2000s, before it was widely accepted and was more in the realm of graffiti.

“I think my favorite part of being a street artist is getting to travel to different places and getting to meet new people and throw some color into their environments and neighborhoods,” Rada said. “It has been really great to just give these places something to look at other than grey walls.”

Rada said he was asked by organizers to help with The ColorBlock, being from the street art culture and movement. He said he is currently in the works on a group proposal for The ColorBlock and is excited to get his friends together to collaborate on a piece.

He said he thinks The ColorBlock will give the artistic community a new opportunity.

“There are a lot of artists here and we have not exactly had a mural program to even give these talented people a place to try their art on a bigger surface,” Rada said. “I do think it will show the community that we need more of this spread around town.”

Wenberg said The ColorBlock Alley is only one of the areas they are painting — there will also be murals on several buildings surrounding the 600 Block of South Barstow Street, she said.

“We chose this area for several reasons,” Wenberg said. “It is presently an overlooked part of our downtown — the alleyway is usually littered and overgrown.”

She said the 600 Block is also home to the Sculpture Tour office. It is also where the tour starts, which carries up Barstow Street and finales with the award-winning sculptures at Haymarket Plaza.

Wenberg said in the future The ColorBlock will serve as a downtown destination which completes the tour back down Graham Ave.

“We have tried to make this project as all-inclusive as possible,” Wenberg said. “It is free for anyone to submit a mural design and the application is very quick to complete.”

She said if selected, artists will receive a $100 stipend for their work and all necessary supplies will be provided to them, including a palette of paint, brushes, trays, tape and more. If interested, an applicant can find the application online at their website and Facebook page, she said.

Wenberg said she believes The ColorBlock will transform an overlooked area into a downtown destination that celebrates the Eau Claire community through free public art. It will be accessible to everyone, 365 days a year.

“Eau Claire has always had a uniquely dense artist population,” Wenberg said. “But with all of EC’s revitalization in recent years, now we have a time to shine like never before.”

Dirks can be reached at [email protected].