Know the history, craft the legacy

Third annual Martin Luther King Jr. Celebration utilizes speech, drama and song to encourage students, staff and all others to use the their voices 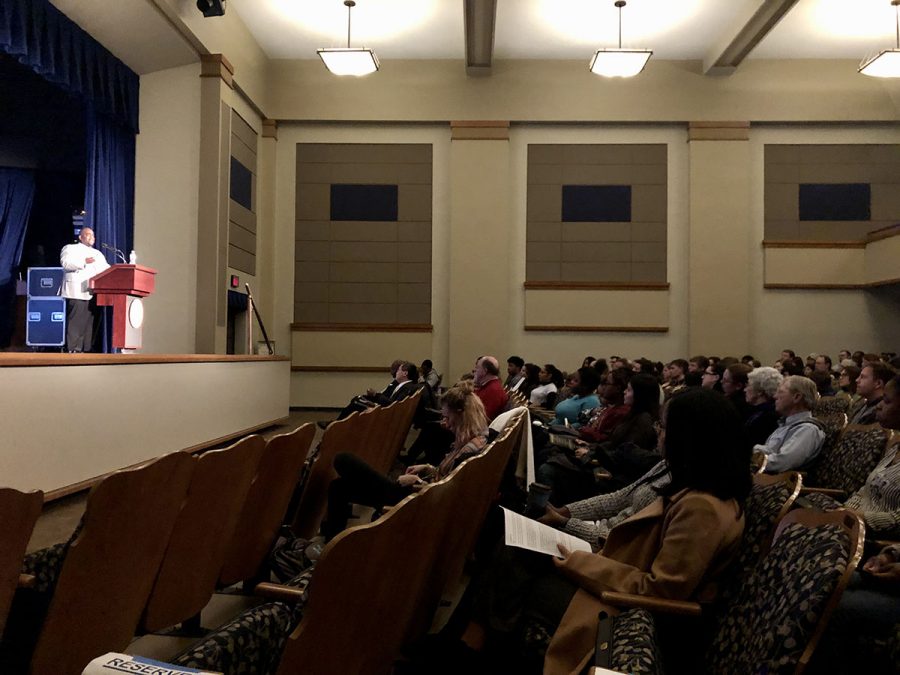 Dr. Warren Anderson — the new Vice Chancellor of Equity, Diversity and Inclusion and Student Affairs — kicks off his first semester at UW-Eau Claire as the keynote speaker at the third annual Martin Luther King Jr. Celebration.

“Oh, freedom…Oh freedom over me…And before I’d be a slave, I’d be buried in my grave…And go home to my Lord to be free…”

The soulful sounds of the Golden Gospel Singers’ “Oh Freedom,” accompanied by a black-and-white slideshow depicting acts of activism instituted during the Civil Rights movement, played on a loop Wednesday night as attendees of the third annual Martin Luther King Jr. Celebration settled into the seats of Schofield Auditorium.

Dr. Demetrius D. Smith — program director of the Division of Equity, Diversity and Inclusion and Student Affairs and the event’s introductory speaker — spoke to the importance of such a celebration. About three and a half years ago, Smith said, students called for an on-campus King celebration. Their voices were heard, he said and subsequent action was taken.

“This celebration is a direct result of student voices,” Smith said. “It’s important for students to recognize the voice that they have and use it. This event is also important because it is our way of ensuring that MLK’s legacy will live forever.”

Smith centered much of his speech on King’s contention that “Our lives begin to end the day that we become silent about the things that matter.” Noting the racial incidents that occurred on campus last semester — incidents which made national news — Smith addressed the seemingly cyclical nature of progress. He again used his own voice to prompt others to speak up not only against racism but against “bigotry, transphobia, homophobia,” etc.

“We should stand up for those things,” Smith said. “That is how we live out Dr. King’s legacy.”

Dr. Warren Anderson, the recently-appointed vice chancellor of the Division of Equity, Diversity, and Inclusion and Students Affairs, was the evening’s keynote speaker. Anderson, like Smith, emphasized the power of words.

“Words are powerful tools when it comes to changing the world,” Anderson said. “As we think back to some of the most eloquent words that Dr. King ever uttered, it’s not just that he delivered them with flawless execution. It was the poise in which he drove them into the hearts of everyone who chose to receive them … My biggest takeaway from the legacy of Dr. King is the concept of individual responsibility and how that can change the world for everyone collectively.”

Anderson turned to some of King’s words — ones Anderson said have proved pivotal in his own own approach to living and leading — to motivate audience members not only to contemplate but to continue the path King paved. He encouraged the audience to consider the legacy they hope to leave at UW-Eau Claire and beyond.

“I very much believe that Dr. King’s vision for an equitable and just society is within reach,” Anderson said. “I believe that when he says ‘We may all come from different ships, but we’re all on the same boat now,’ he speaks to the fact that we as a society, as a campus, have to fight for justice everywhere. We have to educate ourselves on the injustices occurring in every corner of our existence because when one group is the target of ugliness, it impacts the way of life for all of us.”

Anderson, like Smith, pointed out the nonlinear nature of progress — particularly the parallels between the present and the Civil Rights movement. He said every social injustice visible today has been seen before, we have a historical blueprint available for current instruction. This blueprint, he said, not only highlights the repeated barriers but how they’ve been overcome on systemic levels.

“I think I came (to UW-Eau Claire) at a very interesting time,” Anderson said. “But it is also a time of tremendous opportunity. There is going to be challenges ahead, there is going to be changes ahead. Some will be uncomfortable with the change and there will be some who praise it as a welcome pivot. Wherever you fall on the spectrum, please be respectful of the process and understand that the changes are necessary for our continued progress.”

Dr. David Shih, professor of English and the recipient of this year’s Martin Luther King Jr. Social Justice Leadership Award, deemed discomfort as inevitable when discussing and dissecting something as difficult and controversial as racism.

“I invite (my students) to be uncomfortable for fifteen weeks while we study the nature and dynamics of racism,” Shih said. “If what you learn doesn’t seem right to you, I assure them, at the end of the semester, you can go back to believing what you did. Our world won’t penalize you for not wanting to learn more about racism. If what they want out of college is a degree that will lead to a good job and comfortable lifestyle, I tell them, they need to stop talking about racism immediately after graduation. This goes double if they are people of color … But I hope that doesn’t describe you, I say. I hope that you’ll take what you learn in this class and add to it after graduation. Because after you leave here, you are the only one who can hold yourself to account for this learning. This is important to me. Because to hold yourself to account for anti-racism is to affirm your own human dignity. Racists have always believed that their superiority derives from a higher dignity scripted by God, genetics, or both. But people of color know that to be violently racist or blissfully colorblind is to surrender your innate dignity.”

One of the last things to fill the audience’s minds and eyes before the event’s end was a slideshow depicting black victims of senseless violence, followed shortly after by a candle-lit vigil.

“Dr. King died trying to infuse a racist society with justice and love,” Alex Moronge, a third-year accounting and finance student, said. “He died trying to expand the borders of our country. He died trying to stop an immoral war. He died defending the basic humanity of sanitation workers. He died advocating for those in poverty. He died in service of righteousness … As we light our candles here today, we are spreading his dream.”

To close, all in attendance  — with candles lit — joined together to sing “We Shall Overcome.”

Reisdorf can be reached at [email protected].