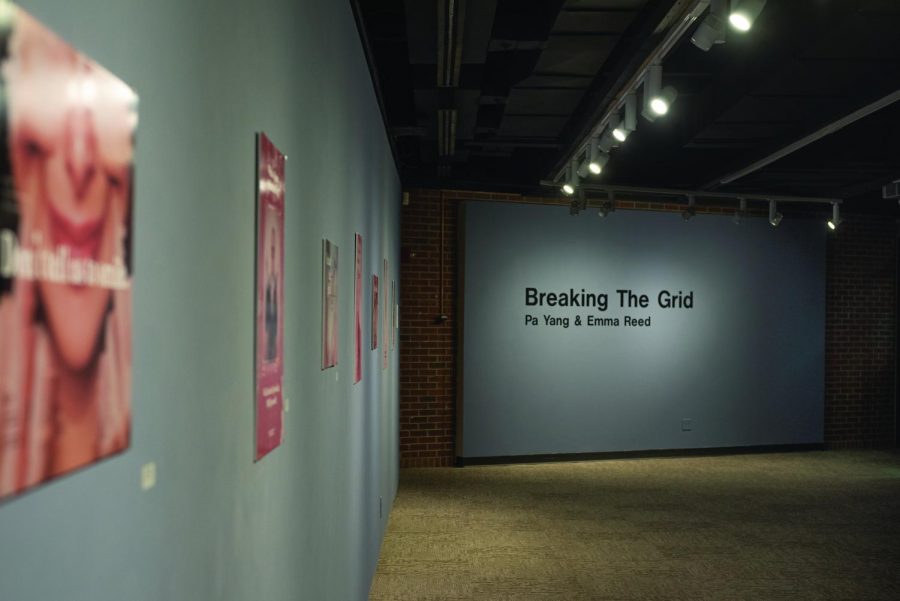 The Ruth Foster Gallery will be exhibiting “Breaking the Grid” from Nov. 25 to Dec. 15. This exhibit features two bachelor of fine arts fourth-year students, Emma Reed and Pa Yang, and their capstone projects.

Challenging society and experiencing train travel can both be seen on UW-Eau Claire’s campus.

On Nov. 25, a new exhibit called “Breaking the Grid” opened in the Foster Gallery. The exhibit was closed Nov. 27-29 due to the holidays, but is now open again until Sunday, Dec. 15.

Reed, originally from Fort Atkinson, Wis., said she didn’t pursue a career in art until she took an art class at UW-Eau Claire.

“I have always been interested in art,” Reed said, “but it wasn’t until I took my first college drawing course that I realized art was something I was really passionate about and wanted to do as a career.”

Reed said she is presenting a poster series that combines text and images to bring attention to the comments made toward women that are absurd.

“The comments I highlight in each poster take a singular view on femininity,” Reed said, “as well as the assumption that women should act or live a certain way.”

Reed said she challenged herself to create these posters not just based on her own experiences with the comments, but with other women as well.

The purpose of these works is to generate conversations and ask questions about the prevalence of these remarks that are deeply ingrained in society, Reed said

Reed said she challenges everyone to think of a time they may have witnessed or experienced sexism and/or oppression and think of ways to learn from those behaviors or experiences.

Reed said she did have some of her other artwork showcased in student juried art shows in the past, but has never presented in this style before.

“I do not have any more presentations planned for the near future,” Reed said, “but I do hope to showcase some work in years to come as I continue to grow as a designer.”

According to UW-Eau Claire Art + Design, Pa Yang, originally from St. Paul, Minn., is presenting a visual identity system for The International Museum of Rail Travel, the purpose being to have viewers experience riding a train from any place in the world.

“The visual identity system is not only used as a branding tool,” Pa said, “but allows viewers a little glimpse of what my vision of the museum is about.”

According to UW-Eau Claire Art + Design, Pa said her piece was inspired by her study abroad to China last summer, where she used the train system often.

Pa said her piece reflects her love for traveling as well as the influences from the places she has traveled to, according to UW-Eau Claire Art + Design.

There will be a reception for the two artists and their work at the Foster Gallery from 3-5 p.m. on Saturday, Dec. 7.