Holiday tunes at the Pablo Center 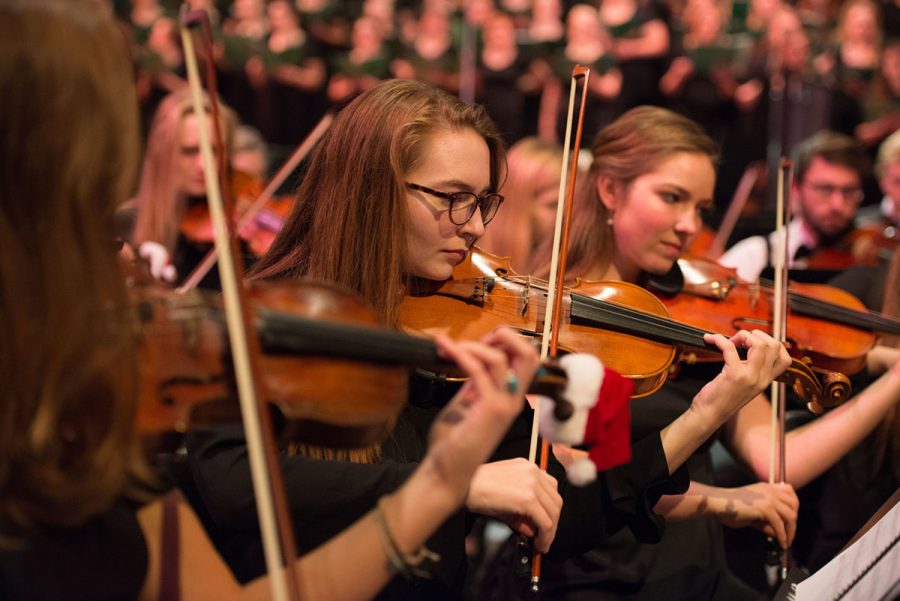 Various music groups from UW-Eau Claire perform at the Pablo Center during the 45th annual holiday concert. Each group played two to three pieces total, with 26 pieces performed in total.

On Sunday, Dec. 8, the UW-Eau Claire music department held its 45th annual holiday concert at the Pablo Center, with one concert at 2 p.m. and the other at 6 p.m.

Each group played two to three pieces total, altogether performing 26 pieces, making each concert last about two hours long. The music ranged from the renaissance period to the 21st century. All groups came together at the end of the concerts to perform a song called “Winter Song,” composed by UW-Eau Claire ‘s Kyle Newmaster, as the finale.

Both concerts gained enough attraction to sell out tickets, which isn’t uncommon, according to Stewart.

Stewart has been the executive director of the holiday concert for the past three years. He said the concerts were held in Zorn Arena on campus until the construction of the Pablo Center in 2018.

The holiday concert started off as the music department’s gift back to the community as well as an event to showcase their talent, Stewart said.

“It’s a great opportunity to get all the students together to hear each other and to support each other,” Stewart said. “Anyone who wants to hear great music should attend.”

Morgan Strzelecki, a fourth-year choral music education student, student conductor of the Women’s Chorus and member of the concert choir, has been a part of the holiday concert for the past four years.

According to Strzelecki, the Women’s Chorus performed two pieces, entitled “Dance on My Heart” by Allen Koepke and “Psalm 23” by Z. Randall Stroope. The Concert Choir performed three pieces, entitled “Sitivit Anima Mea” by Richard Burchard, “Get Away Jordan” by Stacey V. Gibbs and “Angelus Domini” by Giovanni Gabrieli.

“My favorite part of the event this year was being able to conduct the fabulous Women’s Chorus,” Strzelecki said. “This concert is a wonderful opportunity for community members to watch every ensemble in the music department at UW-Eau Claire.”

Avery Burns, a third-year choral and general music education student, choral department assistant and Women’s Concert Chorale, Concert Choir and Audacious A Capella member, has been a part of the holiday concert for all three years she’s been a student at UW-Eau Claire.

“I love that the whole department comes together to share the joy of music with the community,” Burns said. “It is not often that you get to see so many musicians from so many different ensembles in one space performing together, and it is a true delight to witness.”

Burns said most of the planning for the event is done by the faculty because of the event’s magnitude, but as a student employee, her job is to make sure students know what is happening and be available for any other bumps along the way.

“The Holiday Concert presents a variety of ensembles performing pieces in a variety of styles,” Burns said. “There is something for everyone!”