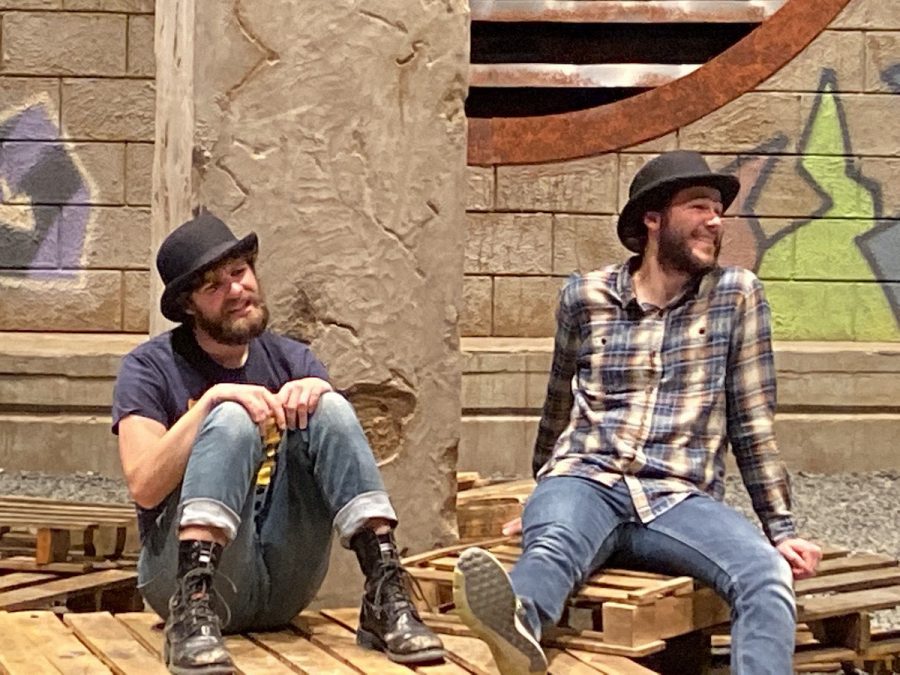 Frank Rineck, a fourth-year English education student who plays Estragon in Waiting for Godot, said audience members should expect to laugh, cry and think at performances of “Waiting for Gadot.”

Though once infamously described as “a play where nothing happens” by literary critic Vivian Mercier, the cast of UW-Eau Claire’s “Waiting for Godot” by Samuel Beckett have a lot more to say about it

The play, which opened Wednesday night, is about two men waiting for a man who never comes. They fill their time playing games and talking, but those involved say audiences will experience much more than “nothing.”

“It’ll make you feel things in a way you’re not supposed to,” Rineck said. “It’s like, ‘oh, that line didn’t make sense, but it kind of made me sad.’”

He contrasted “Waiting for Godot” with a sad movie, where you know you’re supposed to feel sad because something tragic happens.

However, artistic director Arthur Grothe said the show itself is not a tragedy.

“It is a play that actually celebrates life,” Grothe said. “It is grounded in humanity by the end of it.”

Grothe and Rineck both said Looking for Godot doesn’t fall into a simple genre — “Waiting for Godot” is a work of absurdism, which appropriately describes a play that is absurd.

“It’s a movement that came out in response to World War II,” Grothe said. “It was when artists and playwrights saw such devastation and couldn’t make sense of this world.”

Thus, the play doesn’t follow a specific plot or take place in any particular time period. Grothe said he and his artistic team used a unique industrial setting and played with colors to draw audiences in visually, wheareas the show is typically stark and minimalistic.

Rineck said the play is then carried by the actors’ intonations and emotions, which is a challenge considering most of the two-hour production is only the two main characters, Vladimir and Estragon.

“These characters aren’t built on typical foundations,” Rineck said. “They’re built on emotion. You get to see the entire spectrum of emotion from both of us at different times.”

He said he and Ben Qualley, who plays Vladimir, spent the six weeks of rehearsal learning each others acting styles and figuring out ways to build their characters’ interactions.

He said they’ve now been able to achieve an “ebb and flow” that moves the play forward, rather than a typical plotline.

Grothe said that’s the fun of “Waiting for Godot:” audience members can draw their own conclusions and find their own interpretations of the dialogue.

“There’s nothing to ground you in this world,” Grothe said. “You’re having to invent some of that- it gives the actors space to just play.”

Rineck, who said he has been acting since he was six years old, admitted he’s never done a show like this.

“This genre really needs to be seen and experienced,” Rineck said. “It’s a really important show, but it’s not done that often. (Acting in it) is one of those once-in-a-lifetime things.”

Furthermore, Grothe said Samuel Beckett would famously never admit what “Waiting for Godot” is actually about.

He did, however, offer his own speculation.

“Godot, to me,” Grothe said, “is the thing that we’re waiting for that will make our life perfect.”

He said giving the audience so much free reign to interpret the play allows them to be taken out of their own world for a couple hours, much like the 1940s audience it was originally meant for.

“It was written when we were questioning the world,” Grothe said, “questioning our place in the world. I think we’re back in that place again.”

Tickets can be purchased at uwec.edu/service-center.