On Friday night, Davies Center was filled with the sights and sounds of the roaring 20s 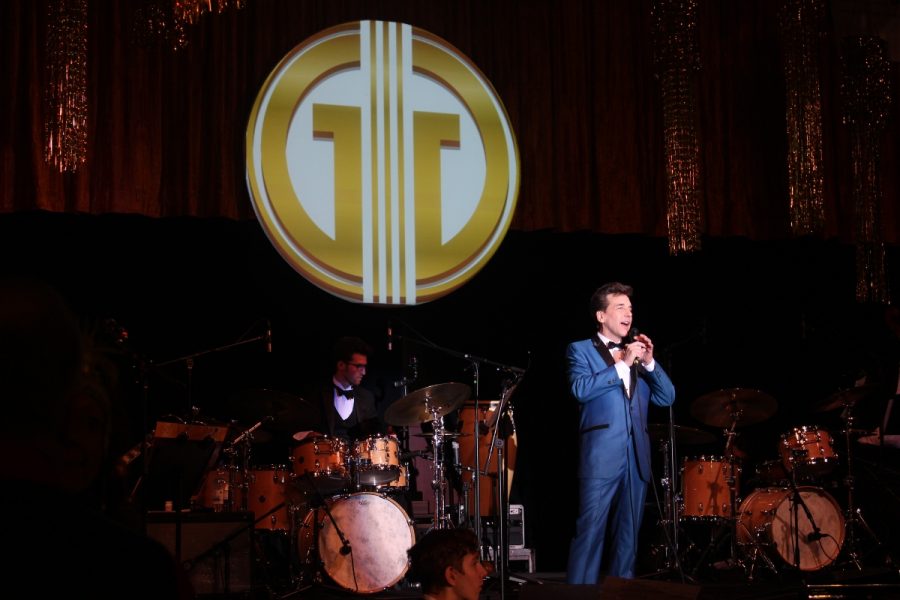 2020 is close, under two months away, but UW-Eau Claire took it back a century and celebrated the 1920s.

On Friday night, UW-Eau Claire and the Eau Claire Jazz Inc. hosted the sixth annual Gatsby Gala on the third floor of the Davies Center.

The ensemble partnered with Michael Andrew, a nationally renowned vocalist, and performed various tunes such as “Havana,” “A Little Party Never Killed Nobody” and “Shake It Off.”

McCormack said he actively pursued music as a choir vocalist and jazz pianist before college, and that UW-Eau Claire’s music scene called to him.

“Eau Claire appealed to me because of the strength of the music scene here, as well as the jazz program,” McCormack said. “I’ve been a participant in jazz ensembles since the first semester of my freshman year, and I also play in extracurricular groups, such as Uncommon Denominator.”

McCormack recommends that all students attend the Gatsby Gala next year as well as Jazz Ⅰ’s concert at the Pablo Center on Dec. 6.

Robert Baca, a professor of music and the director of jazz studies, directed the Jazz Ⅰ Ensemble and is also the artistic director of the event.

According to Baca, the Eau Claire Jazz Inc. and UW-Eau Claire partner up for this event. They spend a year of planning, beginning the week after the event ends. There are fifteen planning board members, fourteen planning committee members and seven interns.

“We create an event worthy of talent our university and community possesses to exhibit to all who attend,” Baca said.

Artists who were new to the Gatsby Gala are the Torch Sisters and Michael Andrew.

According to UW-Eau Claire’s News Page, the Torch Sisters are a circus troupe. They showed the audience aerial performances, shadow-play and “gravity-defying” strength.

Michael Andrew is a vocalist as well as a 1987 UW-Eau Claire theatre graduate. Andrews has performed in various major U.S symphonies and musicals, according to the UW-Eau Claire News Page.

Andrews will return to Eau Claire on Dec. 6 to perform at the Pablo Center to perform with the Jazz Ⅰ and Ⅱ Ensembles.

“We, as an organization, are here to support and promote the culture of jazz,” Volk said. “Every year, we are dedicated to providing the best experience for both the community and the students, and I think we do a pretty good job of that.”

“The Gatsby Gala was originally brainstormed by a few folks on the board, believe it or not,” Volk said. “We wanted to provide the community with a ‘party of the year’ type of event, while raising funds for the Eau Claire Jazz Inc. and UW-Eau Claire’s Jazz Studies program — which is used for scholarships and student opportunities.”

Volk said that the event was inspired by the various Gatsby-themed movies that are popular around this season.

“Given our inventory of Grammy-nominated jazz bands, nationally renowned director Robert Baca, beautiful university facilities, a ‘shoot for the stars’ type of board, as well as a community who loves the arts, we knew this event would be a hit,” Volk said.

Volk attended UW-Eau Claire and studied under Robert Baca and was also part of the Jazz Ensembles throughout college. He said it was there that his career and love for music really blossomed.

Volk said he has been working with Eau Claire Jazz Inc. for six months and was promoted to executive director on Oct. 15. He said he is satisfied with his position.

“Our board is composed of rock-star community keystones who support me and are dedicated to Eau Claire Jazz Inc.,” Volk said. “It is hard to not stay inspired when working with these folks, I am very lucky.”

Alana Ulmer, a first-year music education student, said the event was fun and she enjoyed that the event kept true to the various elements of the 1920s.

“I loved the dresses the most and I would love to go again,” said Ulmer. “Everyone should go at least once.”