D.B. Rouse talks living on the road and how it can be hard, but always rewarding 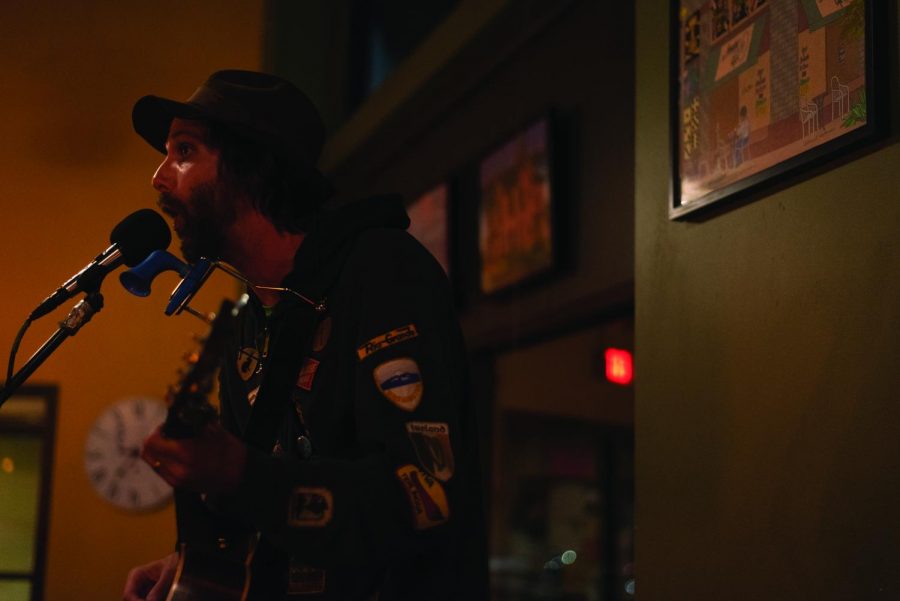 While some musicians travel with guitars, one self-proclaimed “hobo” and UW-Eau Claire graduate entertains with not only a guitar, but a kazoo, bringing his musical talents on the road with him wherever he goes.

“It’s been over 10 years of just being sort of roaming around the road,” D.B. Rouse said. “When I started off, I didn’t even book shows, I just wanted to travel. I would go to the smaller towns with two bars that don’t get live music often and just walk in with my guitar and be like ‘I need gas money, do you guys need music? I’m your band tonight.’”

On Nov. 8, D.B Rouse, a migrant musician, brought his guitar and kazoo to The Acoustic Café, according to the cafe’s website.

Rouse has worked as a lounge singer on a cruise ship, a singing ranch hand near Austin, Texas and as a “hobo musician” for the Grand Canyon Railway, all the while writing and refining his original songs and performances, according to The Acoustic Café website. He is currently sponsored by Kazoobie Kazoos and is an entertainer, a poet and a published novelist.

“I went to the music store here when I was in college and wanted to buy a harmonica, so I could do the whole Bob Dylan thing, but harmonicas are really expensive,” Rouse said. “Kazoos were just right so I bought one and now I’m sponsored by a kazoo company based out of South Carolina.”

Rouse attended UW-Eau Claire and graduated in 2006 as a philosophy student with a religion minor. He has been playing guitar since high school and even played throughout college, he said.

Rouse had a band while he was going to school here as well, he said. They played gigs at The Acoustic Café and The Cabin on campus. But, he thought going solo was better for him after he graduated, and after awhile he met his wife.

“It’s like trying to herd cats because nobody wanted to hit the road and do the whole van life thing, so it made more sense to go solo,” Rouse said. “Then I met the soul-mate who is willing to go through the van life as well, and I don’t know how she does it.”

Rouse said living out of a van and playing anywhere he can is not always glamorous.

“It’s very hard, but it is very rewarding,” he said. “You just have to keep working at it.”

Folk-punk is the main genre of music he plays, but is always changing it up, he said. He plays a set specifically for kids — a more folk- and punk-focused set, a few singer-songwriter sets and a giant cover set, he said.

“It’s americana, folk — I like to call it hobo folk,” Rouse said. “It depends on the album, the listeners and the mood I’m in. It’s just a guy and a guitar.”

He is constantly travelling, having been to all 50 states except Hawaii, he said.

“If I could figure out a way to drive there maybe we would head there but we haven’t quite figured that out yet,” he said.

Rouse had to do four to five hours of covers every day for six months when he performed as a lounge singer on a cruise ship, so he had to know and learn a lot of covers.

“Now I like sticking to originals because it feels better,” he said.

His favorite thing about being a musician is meeting new people and having new experiences that come with each new place, he said.

“When you meet new people and then see them again the next time you travel through, (it’s) always nice,” Rouse said.

“It does remind me of hobo music back in the 30s,” Westgard said.

Rouse’s music is wholesome, happy and can remind people of what’s important and what’s not, Westgard said.

“I think the kind of music with banjos, kazoos and guitars can get a bad rap but there is something special about it,” Westgard said. “It talks about things that are real in life, so I think everybody should give it a chance.”

You can find D.B. Rouse’s music on Spotify and Pandora.