Geekcon to host over 80 vendors to display projects 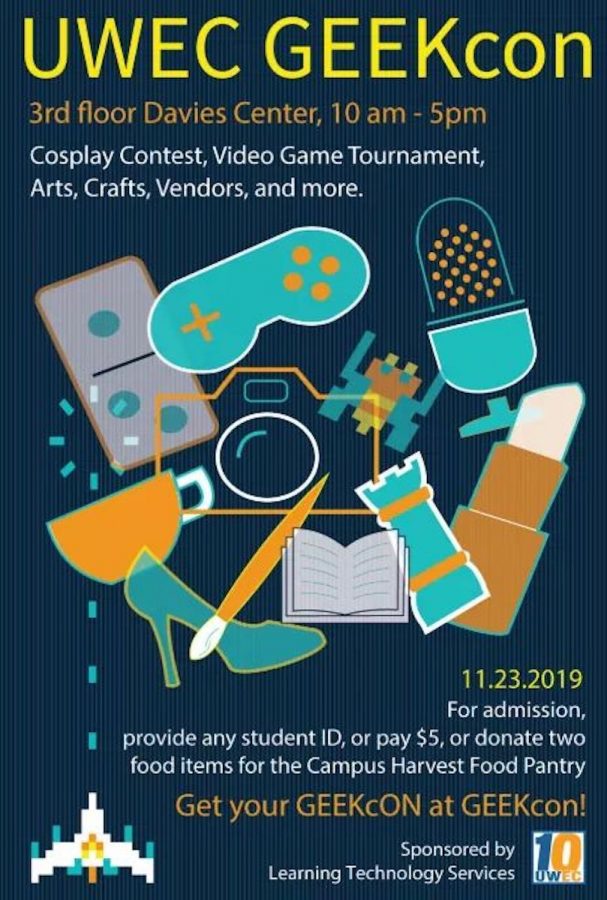 Vendors range from tables displaying various crafts like 3D-printing or henna tattoos, to musicians performing in the Cabin, to a League of Legends competition with other UW-system schools in the Dakota Ballroom.

UW-Eau Claire’s own Geekcon markets itself as an event for anyone with a passion for anything, according to multiple organizers.

The conference, which will take place this Saturday in Davies Center from 10 a.m. to 5 p.m., consists of around 80 vendors, as well as performances, eSports and cosplay.

Vendors range from tables displaying various crafts like 3D-printing or henna tattoos, to musicians performing in the Cabin, to a League of Legends competition with other UW-system schools in the Dakota Ballroom.

Robert Mattison, who founded the event four years ago, said his goal has always been to cultivate community engagement on campus and give anyone who wants to participate an outlet to display their hobbies.

Any individual student, organization, alumni, faculty member or member of the community interested in sharing a particular passion is invited to request a table.

“This is an event that displays all different passions and hobbies,” Isaac Flath, co-assistant director of publicity and promotions, said. “We have everything from singing, painting, to video games, sewing, knitting. There’s a magician, there’s a LEGO room … if you want to see anything cool, it’s here.”

Tables are free, and Mattison said all they ask is that vendors contribute positivity to the event. Otherwise, he said organizers are happy to give anyone space to express themselves.

“When you know people’s passions,” Mattison said, “they’re apt to be more friendly and open.”

Not only does Geekcon highlight Blugolds’ own work, but the entire event is sponsored by TV10, and organized and executed by students in Nicole Schultz’s CJ351 class.

The 30-student class, Strategic Event Planning, is divided into departments that each handle a different aspect of planning a large-scale event, such as hospitality, recruitment, vendor communications or promotions, which is the team Flath is on.

Students were able to apply for the positions they wanted to fill, complete with a cover letter.

Schultz’s class only took over Geekcon last year, and Mattison said without the class’s help, the event would not exist on this year’s scale.

“Rob is just contagious,” Shultz said. “His passion for connecting people and their passions and each other is something I thought would be lively in the classroom.”

Both professors said they were impressed with the amount of effort the class had input in order to pull off the convention.

“Students have been so impressive with the creativity they come to the table with,” Schultz said. “And connections they’re willing to make with each other, and the community…if there’s something they need to take care of, they do it.”

Mattison, who said he attends virtually every class session, is there to answer questions and give advice.

However, he said he never argues and encourages students to foster their own ideas.

“I like to see things grow,” Mattison said, “just because I created it doesn’t mean it’s the best way. It just means it was the easier way for me.”

Flath said he was grateful for the freedom he’s been given on the project. As a public relations major, he said this is the first time he has been able to have hands-on experience with handling publicity for an event.

“It’s been a lot,” Flath said. “Actually learning how to put on an event, actually carrying that on — it’s definitely been a different experience than any other class I’ve taken here.”

He said he estimates he puts in about five hours of work outside of class per week. He said that included giving interviews, responding to messages, and creating artwork for Geekcon.

Schultz said she thinks her event planning class is especially beneficial for resume-building, as students are gaining real-world experience.

Last year, Schultz said only half of her class worked on Geekcon, but this year the whole class is involved.

“I’ve really seen them own it,” Schultz said. “The biggest growth is that they’ve grown themselves, and grown within the event.”

Mattison said he has appreciated his involvement with Geekcon.

“It is the biggest honor I’ve had on campus,” Mattison said. “Having something I created become a teaching moment. It’s so cool.”

Mattison said he has been involved in conventions like this for years. He said he’s been attending Comic Cons and monster conventions (as he said monster model-building is his passion) for decades, which inspired him to found the Eau Claire Comic Con 12 years ago, when he owned a comic shop in town.

However, he said he’s “not a money guy” and let others take over the Comic Con when it began to turn profits.

Mattison said he continued to be passionate about monsters, which was essentially the inspiration behind Geekcon.

“I love sharing my hobbies,” Mattison said. “I’m very happy. I’m a positive person and if you want to know why it’s because of what I do on the outside.”

Geekcon is family-friendly and free to anyone with any school ID (Blugold or otherwise). Without such an ID, organizers ask either a $5 admission fee or the donation of two food items.