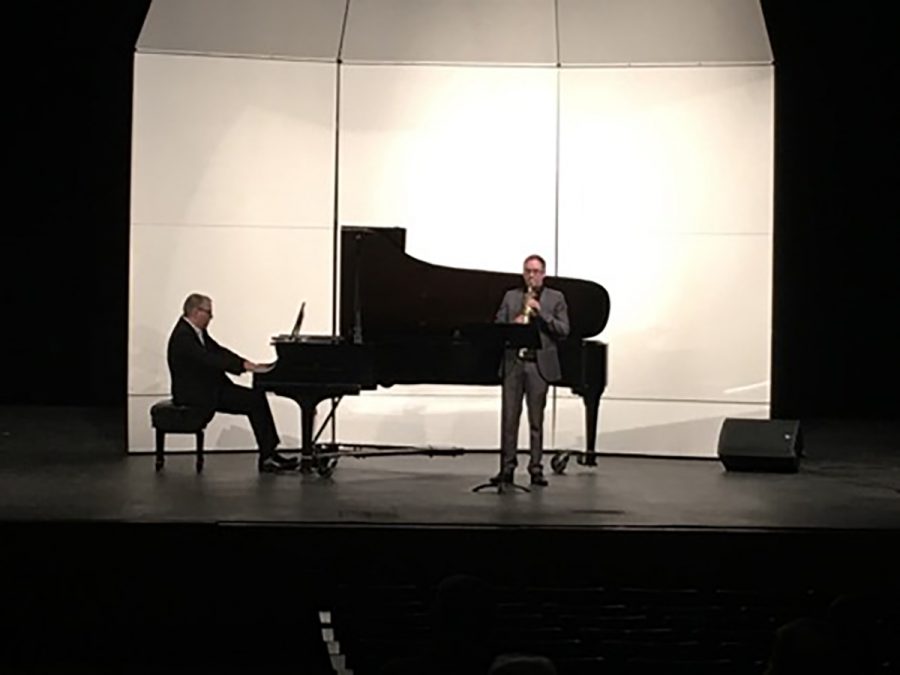 The Spectator Nicholas Phillips, a professor of music, and Alastair Wright, a lecturer of music perform the piece “Chinese Ancient Dances.”

The UW-Eau Claire music department hosted its third annual Faculty and Alumni Gala at Gantner Hall in Haas on Sept. 28. The concert featured many musicians, all of which are either faculty or alumni of UW-Eau Claire.

The music and theatre arts department faculty take turns volunteering each year to lead in organizing the project.

This year, Christa Garvey, oboist and professor of music at UW-Eau Claire for 17 years now, not only performed at the gala but also set up and planned this year’s event.

Garvey believes that performing for the community and students is a part of a music professor’s service to the people. She said she wants the campus and community to look and see what the faculty does and what they produce in terms of performers.

She said she believes the gala is a great way for the campus and community to hear what some of their teachers do.

Garvey said she enjoys playing for her students. She wants music students to hear music performance done on the collegiate level and hopes they all continue their careers in music.

Garvey said all proceeds from the event will go toward student scholarships.

“We don’t have a lot of scholarships funds that we can give annually. We just wish we could give a lot more,” said Garvey. “So this is one way we’re trying to pay back.”

Jennifer Fraley, both an alumni and a faculty member of UW-Eau Claire’s music and theatre arts department, also performed at the gala.

“It’s so much fun to get to share the stage with former students; that’s something that’s really special for us,” said Garvey. “It’s really meaningful.”

Nicholas Phillips, a pianist and another UW-Eau Claire professor of music also performed at the gala. Phillips has been playing the piano for about 35 years and is an alumnus of the University of Nebraska – Lincoln, Indiana University, and University of Missouri-Kansas City Conservatory of Music.

Phillips was interviewed for his current position during his last semester as a doctoral student and said he feels lucky to have landed in such a great community.

Phillips said he encourages Blugolds to explore the events calendar for the music and theatre arts department as most events are free or very cheap.

“Go to a concert you’re not sure of,” Phillips said. “I bet you’ll enjoy being exposed to something new!”