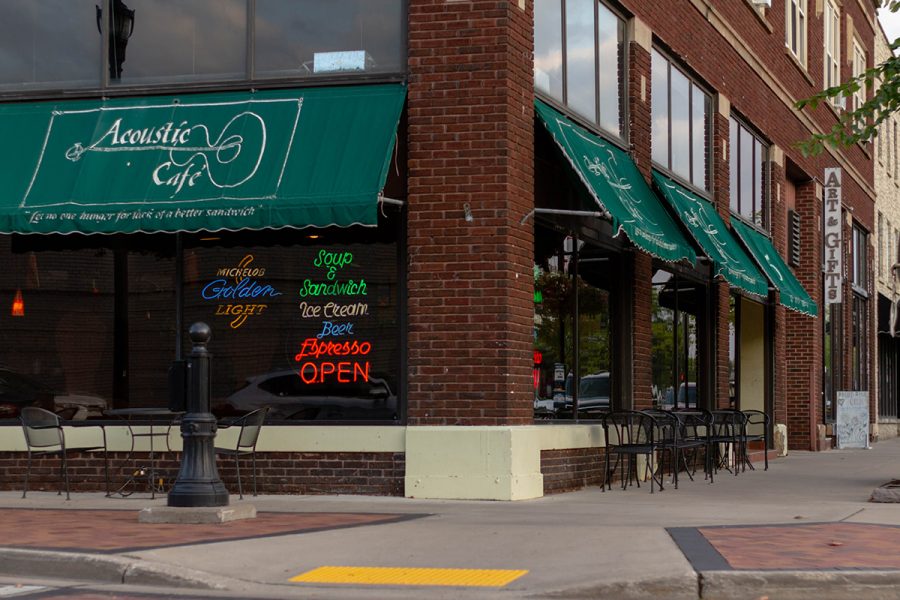 The Acoustic Café is located on Barstow Street in downtown Eau Claire. The shop is known to have versatile seating arrangements alongside a rotating drink and pastry menu.

For the last two decades, Barstow Street has evolved into a welcome spot for both students and community members. The corner coffee shop, The Acoustic Café, is no exception, as it celebrates the 25 year anniversary since opening.

According to The Acoustic Café, the all day anniversary event was held on Sept. 28. The celebration included 25 cent coffee, soda and lemonade alongside live music.

Seth Reinhard, a fourth-year political science student, said he just happened to come across the event when exploring the downtown area.

“I was walking with a couple of friends from the farmers market,” Reinhard said. “We just thought that for downtown coffee shops, (The Acoustic Café) was close so we could try one that most of us have never been to before.”

A general manager at The Acoustic Café, Morgan Hines-Munson, said the event brought together all the elements that the café has been known for since opening in September of 1994.

“It was such a success, we had some crazy deals going on throughout the day but that brought in the crowds for sure,” Hines-Munson said. “We had a lot of different acts play that night and everyone who played was local to the Eau Claire city area.”

Reinhard said that the 25th anniversary event showcased the inviting aesthetic the coffee shop provides for customers. Reinhard said he specifically enjoyed the variety of seating the shop had.

“You can come down here by yourself and do homework or if you are coming down with a few friends to grab something to eat,” Reinhard said. “There is a lot of open space and availability for you to do whatever you actually need.”

Hines-Munson said the 25th anniversary impacts both customers and employees, with all the preparation prior to the event and the engagement during.

“I have worked at small businesses for the past couple of jobs that I have and it is such a different work experience and in a lot of ways more fulfilling,” Hines-Munson said. “The staff works really hard to be friendly and helpful. We try to really be knowledgeable about the products we are selling.”

Reinhard said the café appeals to different characteristics of campus life and the locals of the community. He hopes to return and show both his family and friends.

“It shows people who may be new, whether they are freshman or transfer students, what downtown Eau Claire actually offers them,” Reinhard said. “It shows that there’s more than just a campus they are stuck in. When you come downtown you get this nice vibe, it is always lovely but it is also a relaxful time.”

Hines-Munson said The Acoustic Café staff want to express how honored they are to have had a successful event, and hopes that people continue returning to their location.

“We owe it all to our customers, we owe it to the community,” Hines-Munson said. “We have so many people who are regulars who have been coming for years, sometimes even the same time of day. We appreciate everyone and you do not know what you are missing if you haven’t been to (The Acoustic Café).”