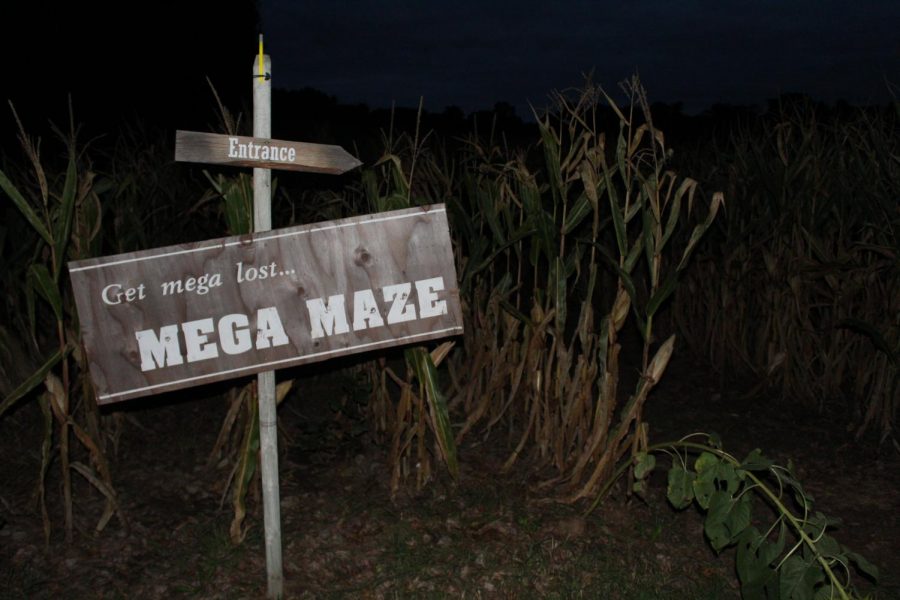 Leffel Roots offers an after dark version of their corn maze from 7 to 10 p.m. on Friday and Saturday nights.

Leffel Roots Apple Orchard opened its after-dark corn maze for the fourth season this past Friday.

The after-dark corn maze is the only one of its kind in the Chippewa Valley and runs on Friday and Saturday nights in October.

Avrey Bergum, a first-time visitor and third-year student at UW-Eau Claire, said the best part about the maze was the added difficulty of navigating it in the dark.

“Going at night made it a lot more spooky and harder to go through with friends,” Bergum said.

Bergum was not the only UW-Eau Claire student at the corn maze event. Abbey Jones, a creative writing student, said she had some recommendations for anyone willing to brave the night maze.

The Wishmakers, a campus club at UW-Eau Claire, will also be hosting a trick-or-treating night on Oct. 27 from 12 p.m. to 3 p.m. to support the Make-A-Wish Foundation, according to Volume One.

Hiding in various locations throughout the maze, the Wishmakers will be offering candy for any who enter, Laura Leffel, one of the Leffel Roots owners, said.

Leffel said the event is for anyone who’d like to be a kid for a day. While not required, she said dressing up in costume is encouraged.

Leffel, along with her husband James Leffel, purchased the orchard in 2015.

James Leffel was retiring from a long military career but wasn’t quite ready to retire completely. And, because James Leffel grew up on a dairy farm, the couple said they decided it was time to return to farm life.

Not wanting to deal with the hustle and bustle of the constant care for and milking of cows, the Leffels found a small field that grew two types of apples that they have now grown into Leffel Roots, the couple said.

Leffel Roots, which operates from September through October, features more than just a corn maze. Visitors can walk through a pumpkin patch and an apple orchard with nine different types of apples. They can also use an apple slingshot.

Laura Leffel said she came up with the idea for an apple sling shot after seeing all the wasted apples that fall off of the trees each year.

“It just seemed like it would be something really fun to do,” Laura Leffel said.

There’s fun for all ages at Leffel Roots, Leffel said. The weekends are filled mostly with families, teenagers and students, and the weekdays are often filled with seniors and retirees.

Samantha Morrell can be reached at [email protected].