How one professor shares her culture through hands-on learning 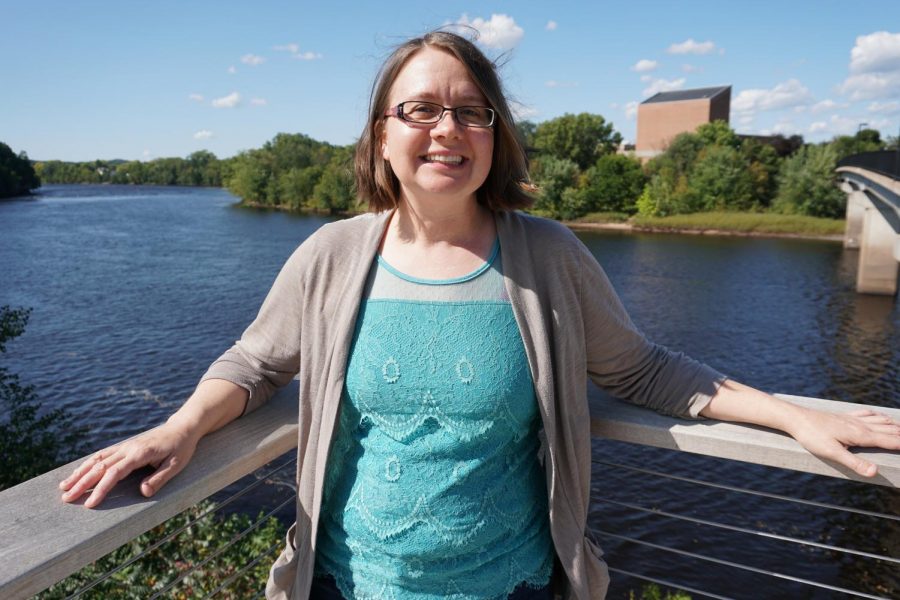 Geniusz teaches a unique course at UW-Eau Claire; one that helps many people across the country and internationally, Geniusz said.

With her course, Ojibwe Culture and History, Geniusz takes time to teach her students not just Ojibwe history, but also the culture of her people, she said.

Geniusz grew up in Milwaukee with her sister and her mother, who taught the course before Geniusz, and helped her in teaching the course herself. Geniusz, who is Cree and Metis on her mother’s side, got her name, Keewaydinoquay, from the indiginous medicine woman who taught her mother.

Both Keewaydinoquay and Geniusz’ mother taught the course at UW-Milwaukee.

“I want to create a safe place for people to learn about their culture,” Geniusz said.

Due to the overpopulation of the boarding schools and the violence inside, the cultures of the various tribes in the northern Americas were stripped down to their cores. The tribes lost their young people, who in turn lost their culture, making them unable to connect with the older generations.

But programs like Geniusz’s class are working to change that. Now, she said, people are starting to reconnect with their cultures and with their families, as well as teach others about the culture as well — all through the use of tea and culturally significant activities.

One student in Geniusz’s class was able to reconnect with her grandfather who only spoke Ojibwe, by talking about different fishing techniques and bait from vocabulary she learned in her Ojibwe language class.

Cultures can be taught in a variety of different ways. The way Geniusz fights to bring her culture back is through the use of her classroom, and through making tea.

“Indigenous languages have been hit so much by institutional racism,” Geniusz said. “People who don’t have their language want to reconnect.”

In her classroom, Geniusz teaches the culture of the Ojibwe people as well as the language through hands-on activities ranging from making dream catchers, to tea dolls, to making tea out of native plants. With each of these activities Geniusz teaches what the native words are and what the ceremonies or practices mean to the native people.

Geniusz’s course, Language 160 Ojibwe Culture and History, and her other courses on Ojibwe language, teach students not only the ins and outs of the Ojibwe language, but also go more in depth to explain the cultural significance behind the language, Geniusz said.

For one of her honors classes, Geniusz said they make tea dolls, which traditionally don’t have faces, and take pictures of them around campus as a form of advertising for the class while also keeping the students active and involved in their learning.

Some of the courses Geniusz teaches can be found online, as well as the recordings of her mother’s class. These classes have helped many people across the nation to reconnect with their heritage and learn about things that were lost to them due to institutional racism like the boarding schools.

On any average day, there are roughly seven people watching or listening to these classes, which does not account for the many who are listening or watching the archived classes, Geniusz said.

“We have a long tradition here,” Geniusz said, “and we are helping many people reconnect with something that they lost in an often violent and racist way”

Through the use of tea, Geniusz has connected her classes not only with her culture, but to the land itself.

The midwest is rich in nature, with a variety of different local plants fit for consumption. For the plants that can’t be consumed, they can be put to a variety of other uses, Geniusz said, including using invasive species like grape vines for dream catchers, or Cedar bark as tinder for fire or for making rope.

Geniusz said she hopes that through using tea and other natural ingredients students will not only gain an appreciation for the singular plant itself, but also for nature as a whole.

Geniusz said she was grateful to grow up learning about her culture and learning not only Ojibwe, but also Anishinaabe. Through teaching she hopes to help others who weren’t as fortunate reconnect with their heritage and help create a generous and safe place to learn it here at UW-Eau Claire.

Geniusz is one of three tenured faculty members on campus with a Native American background. Geniusz can be reached at [email protected] for any questions about her classes or tea making advice.