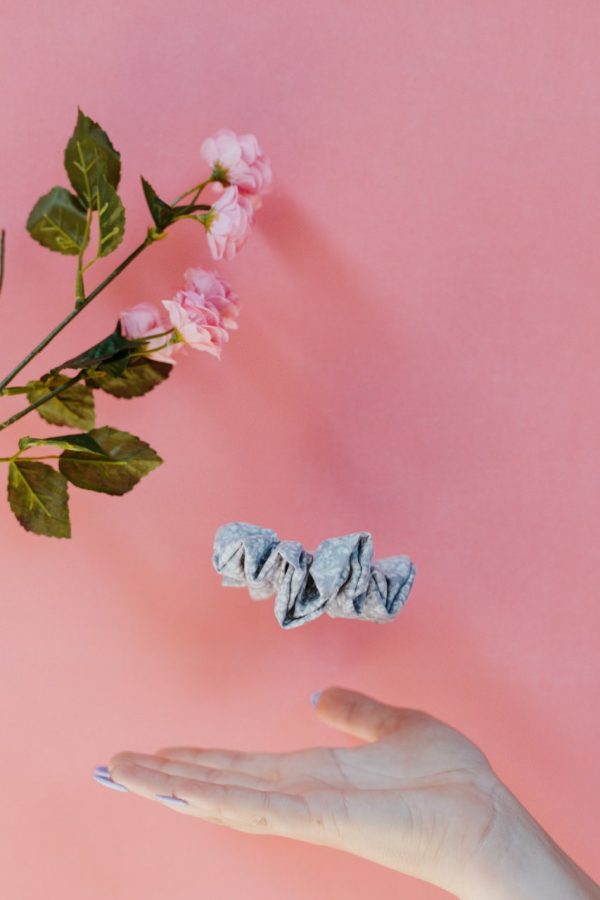 With the launch of a new online website, Every Bitch Needs a Scrunchie showcases new ways to purchase locally.

Since befriending Kenzie Beam in the fourth grade, Mary Zahn, a second-year student, has loved watching her friend grow while witnessing the start of her local business.

“She started making the scrunchies in one of our (high school) Home Ec classes,” Zahn said. “She didn’t even own a sewing machine and had to borrow one.”

According to Kenzie Beam, a second-year student and founder of Every Bitch Needs a Scrunchie (EBNS), the business began by finding styles and patterns that close friends and herself would enjoy.

“When I go to the fabric store and see patterns I think ‘this reminds me of my friend, Sophie’,” Beam said. “If (my friends) like them, that means other people may like them too.”

According to her Instagram account, @everybitchneedsascrunchie, Beam originally sold a range of scrunchie styles through direct messaging. She now has expanded to selling scrunchies, headbands, scrunchie scarves and a line of brand stickers.

Madison Dier, a first-year student, said small businesses deserve recognition for the intimate connection they share with their audiences.

“There are plenty of other ways to buy scrunchies,” Dier said. “Yet there is something special about knowing who you are buying from and knowing the money is going to a nice and trustworthy source.”

Beam said her business name has received a variety of opinions from different age generations.

“People my age think it is a really good name,” Beam said. “Although it took people, like my mom, a  minute to accept the name. It’s out there and I realize that, but it’s what my company is and I don’t want to change it.”

According to Zahn, being in Eau Claire has allowed Beam to attract a new wave of customers and establish an in-person buying experience for college students.

“For her, it was a really cool way to meet people and make new friends,” Zahn said. “She did an Entrepreneur Fest last year at Eau Claire because she wanted to do more in person selling.”

Dier, who also runs her own independent jewelry business, said she is inspired by fellow companies who have started from nothing and built a successful platform for themselves.

“As a small business owner myself, I know how hard it is to form a solid following and audience,” Dier said. “I would love to see more small businesses get the support they deserve.”

Beam credits the expansion of EBNS to her rise in popularity over social media, which has now allowed the launch of her own website

“I started my Instagram and that is how I built everything I have,” Beam said. “I launched my website because selling over Instagram DMs took so much time, but this is a more efficient and professional way to run things.”

Since launching her official website, Beam said she has encountered elements that take away the benefits of buying locally.

“My website automatically charges for shipping, but I really like the aspect of being able to personally meet everybody,” Beam said. “I am trying to figure out a way that I can still do that but people can still buy through my website.”

Zahn said Beam has put in incredible amounts of work despite not always crediting herself for it.

“I think the coolest thing about buying from EBNS is that you are getting something unique, personalized and made with love,” Zahn said. “She is very passionate about standing up for what she believes in, so I think people will resonate with that.”

Although Beam’s primary focus is her social work major, she hopes to connect EBNS with her education path.

“I have dabbled with donating profits to organizations and other non-profits,” Beam said. “If I continue (EBNS) as a full time thing I would definitely incorporate those more. Or have it as a side business while I work as a social worker.”

Dier hopes that after seeing businesses like EBNS, others will support artwork around their community and consider the idea of starting their own business.

“I feel like people are scared to put what they are passionate about out there, in fear of being rejected,” Dier said. “Which makes the art so much more special.”

Beam has set goals this year to reach a larger audience through EBNS and the release of new products for the future.

“I want to find a way to get the website out there more,” Beam said. “I want to build a way to make (EBNS) more accessible to people who don’t know about it.”

Zahn hopes that EBNS will continue to broaden through the launch of her website, yet will support Beam in whatever path her business follows.

“She is a really smart and talented entrepreneur,” Zahn said. “If one day she decides it’s not scrunchies anymore, she will definitely find something else to make her mark on the people around her.”