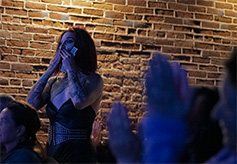 Devine Intervention thanks the crowds for supporting the fundraiser.

Every table in the back room of The Plus was full. Music pulsed over the chatter of the audience as they waited for the show to start.

Devine’s Rude Awakening was put on by drag queen Devine Intervention, who is competing for the crown of Miss Lacrosse Pride 2019, along with her posse of queens.

Miss Lacrosse Pride is a fundraising pageant where the winner is crowned based off of the amount of money they raise for the charity involved, with this year’s charity being the 7 Rivers LGBTQ Connection center. All the money raised will go to support the teens and adults who use the center.

“It’s all going to a good cause, so I’m just glad to be a part of it,” Intervention said.

After her show at The Plus, Intervention raised $740, not including the presale calculations.

Intervention said her total goal for this season is $2,000.

Intervention was supported in the crowd by Megan Melville and Becce Woestman. Both are volunteers at the Chippewa Valley LGBT Community Center, and work with its Trans Parents support group.

“We like seeing them (the LGBT community) being lively and themselves,” Melville said. “We want people to just be open to everything and anything. Support what you believe in.”

Melville’s involvement in volunteering within the LGBTQ community began a few years back with Fireball, an annual drag show fundraiser that is run by UW-Eau Claire.

“Just support people in what they want to be,” Woestman said.

Throughout the show, the drag queens took tips from the crowd, interacting with them and lip syncing to songs as they danced around the room.

Intervention’s journey into the world of drag started a year and a half ago. She grew up in Marshfield, Wisconsin, where she was bullied in school and not accepted by her peers, she said.

Then she came to Eau Claire and discovered its rich LGBTQ community. After a while, she got into drag herself.

“It allowed me to express myself in ways I didn’t know I could,” Intervention said.

Intervention is also known as the Goth Queen of Eau Claire, as her look tends to lean toward the dark and macabre, she said, with her favorite parts of the show being her interactions with the crowd.

“It doesn’t matter what people think about you, it’s what you think of yourself,” Intervention said. “As long as you’re having fun.”

If she receives the title of Miss Lacrosse Pride 2019, Intervention can then go on to compete in the Miss Club Wisconsin.