Women speak out about the joys and hardships of motherhood

Women spoke about their motherhood experiences at the Chippewa Valley Writers Guild's "Sound and Stories: If Mama Ain't Happy, Ain't Nobody Happy" event on Monday 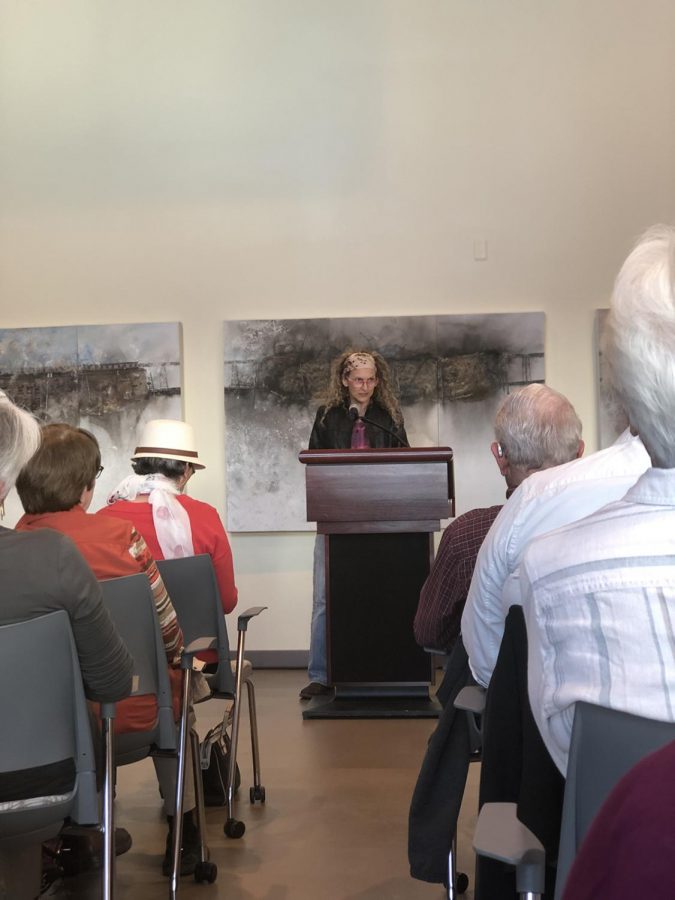 Patti See speaking about her writing experiences in motherhood.

Music and writing are two different ways of constructing the same outcome — a story.

With this past Sunday being Mother’s Day, the scene was set for the “Sound and Stories: If Mama Ain’t Happy, Ain’t Nobody Happy” event at the Pablo Center on Monday night.

Sound and Stories is an event that pairs together some of the region’s best writers and storytellers, as well as the best musicians, to enhance all art collectively, BJ Hollars, the founder and executive director of the Chippewa Valley Writers Guild, said.

Hollars said the event is a program of the Chippewa Valley Writers Guild and seeks to showcase regional arts and entertain the community at an affordable price.

The event consisted of five writers, one musician and a theatrical group of women from the Eau Claire Women of Theatre, all of which made their stance on the joys and hardships of motherhood.

“It’s an opportunity to speak to the diversity of motherhood experiences,” Hollars said.

He said the event was a community wide endeavor, combining literary and musical audiences.

Patti See, one of the speakers at the event, said she’s writing since high school and a lot of what she writes about revolves around having a mother and being a mother.

“It means giving a voice to those who don’t have a voice,” See said. “Being a mother and how it’s wonderful and terrifying. A lot of people have experienced it but haven’t gotten to write about it.”

She said she thinks it’s fun and exciting to hear other people’s work live and to listen to different takes on the same theme.

“When other people go to readings like this, it sparks ideas,” See said. “I’m hoping the audience will think about their own stories.”

Jerrika Mighelle, a musician for the event, said sound and stories helped put value to things like motherhood.

“I was nervous,” Mighelle said. “But the music brings me closer to my mom.”

She said to her, mothers are the most noble, hard-working people there are.

Mighelle performed four songs in between each speaker, all of which were dedicated to her mother who had passed, she said.

Maddie Herzfeld, an audience member, said she liked that no matter if you could relate to the speakers’ stories or not, there’s always some way the audience could connect to them.

“You can pick things that speak to you from each story,” Herzfeld said.