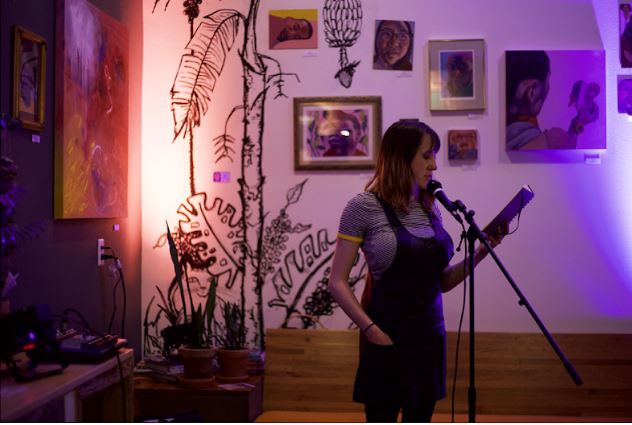 The Family Support Center in Eau Claire teamed up with SHIFT in order to create the event and encourage conversation about sexual assault.

One such opportunity for this discussion, the Sexual Assault Awareness Poetry event, was held  Monday at the SHIFT Cyclery and Coffee Bar. People from the Eau Claire community were provided with a safe space to both read and listen to poetry regarding the topic.

The Family Support Center in Eau Claire teamed up with SHIFT in order to create the event and encourage conversation about sexual assault.

The poets who read during the event were able to discuss their personal take on sexual assault through the form of art.

One poet, Maggie Stich, said she hoped her poetry was able to help others gain an understanding of the prevalence of sexual assault in the community.

“I guess I hope to inspire awareness in general,” Stich said. “It’s really hard to realize that there are victims around us every day and that it’s important to be socially appropriate and be conscious of who you could be hurting or affecting with your language.”

Along with Stich, poet Chanel Harwick aimed to raise awareness of sexual assault as well as make victims feel more comfortable about sharing their past experiences.

Amanda Mondlock, the Victim Services Coordinator for the Family Support Center and head of UWEC Center of Awareness of Sexual Assault (CASA), said it is important for people in the community to attend these kinds of events.

“We want to make sure that we’re providing these safe spaces for people in the community to come seek support, find out what services there are for them and exist in these safe spaces where they can talk about their experiences,” Mondlock said.

Sexual assault prevention is another topic Mondlock touched on. She sees a lot of miseducation about how sexual assault works in our community, which can gear prevention efforts in the wrong direction, she said.

“People say ‘carry your pepper spray and carry your keys between your fingers and don’t walk alone at night,’” Mondlock said. “And, while those are great safety tips, the majority of the time, anybody that’s sexually assaulted is acquainted with the perpetrator. It’s important to understand the reality of how sexual assault is happening, then we can form better, educated responses.”

Continuous discussion on the importance of acknowledging sexual assault in the community is key to making change, Stich said. She said she hopes progress comes as a result of these discussions, in terms of finding victims more acceptance and comfort within their communities.

“I think that sexual assault is something that isn’t talked about enough and is often a scary topic to talk about, but I’m a firm believer in that fact that the more people that are aware the more we can work to prevent it,” Stich said. “We can work to help people feel more comfortable in any given situation.”

Zenner can be reached at [email protected].