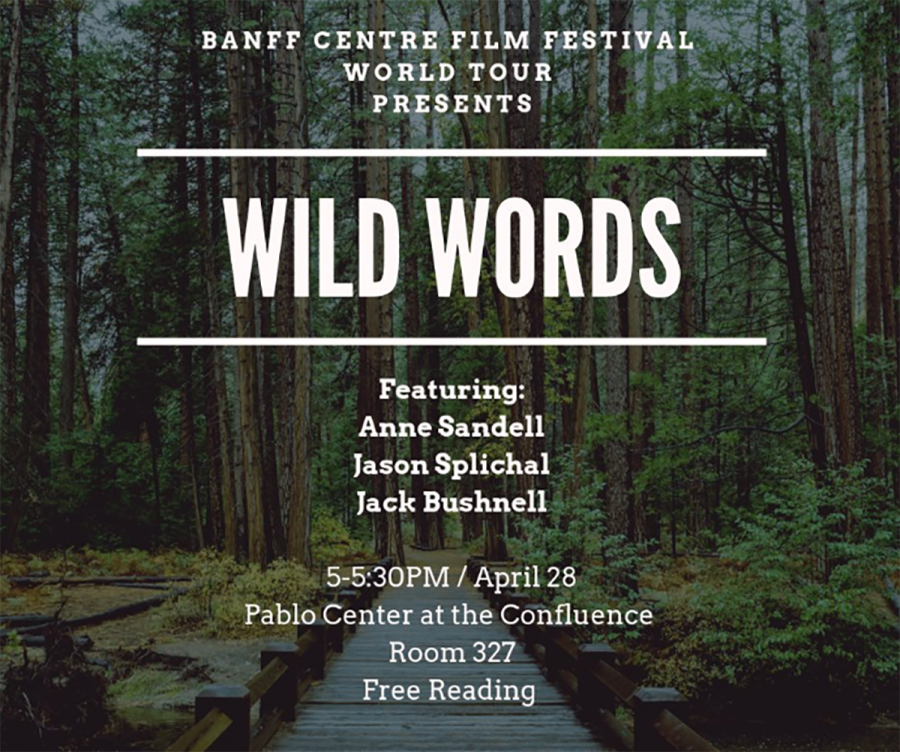 “Wild Words” — a collaboration between the Chippewa Valley Writers Guild, Banff Mountain Film Festival and Get Active Expo — will feature readings focused on the natural world.

“Wild Words” — a collaboration between the Chippewa Valley Writers Guild, Banff Mountain Film Festival and Get Active Expo — will feature both literature and film.

Three writers will read their works at 5 p.m., followed by films for the festival at 7 p.m. on Sunday, April 28 in room 327 at the Pablo Center.

BJ Hollars — the executive director of CVWG and an English professor at UW-Eau Claire — is helping coordinate the event.

Hollars said Banff reached out to the CVWG first in hopes of a collaboration to create an additional literary component for the festival.

“We were glad to make it happen,” Hollars said. “I’ve found that the more various art forms that can intermingle and be in conversation with one other, the more fruitful the experience for viewers and listeners.”

Jol shared the ethos of the event with Hollars, and Hollars said the event felt like a good, “natural fit.”

One of the authors that will be featured at the event, Anne Sandell, is a UW-Eau Claire alumna who now works for HealthPartners Insurance in Minneapolis as a communications consultant.

Sandell said she wrote the piece she will be reading as a “super senior” in college, which discusses her dad’s experience with cancer.

She said she also included her experience of traveling to the base camp of Everest in her third year of college.

“I think the biggest reason I’m doing this is because I went to college for writing, and I loved it,” Sandell said. “I graduated and started writing for other people, and I never took the time, outside of school, to highlight my work or even do anything with it.”

According to Sandell, Hollars contacted her to share her story, as he felt it fit the natural world theme well. While this is not something Sandell said she does regularly, she decided to take a chance and try it out.

“This is one of those things you don’t do super often unless you’re an actual author,” Sandell said. “So I thought it would be a fun experience.”

The three readers will be given 10 minutes each to read their pieces. Another writer, Jason Splichal, is an English teacher at South Middle School and has written several books. Jack Bushnell, an English professor at UW-Eau Claire known for his own literary works, will be the third reader at the event.

Hollars said he believes Banff’s commitment to the natural world represents the mission of CVWG well through this event.

“Scientists do a remarkable job of communicating the importance of protecting the environment, but sometimes art can reach different audiences in a different way,” Hollars said. “By combining films and literary readings, we’re offering two new avenues for people to learn about the environment, the natural world and our responsibilities to protect it.”

While attendance to the reading portion is free, tickets for the film portion of Wild Words can be purchased from the Service Center in Davies or purchased over the phone at: 715-836-4636.