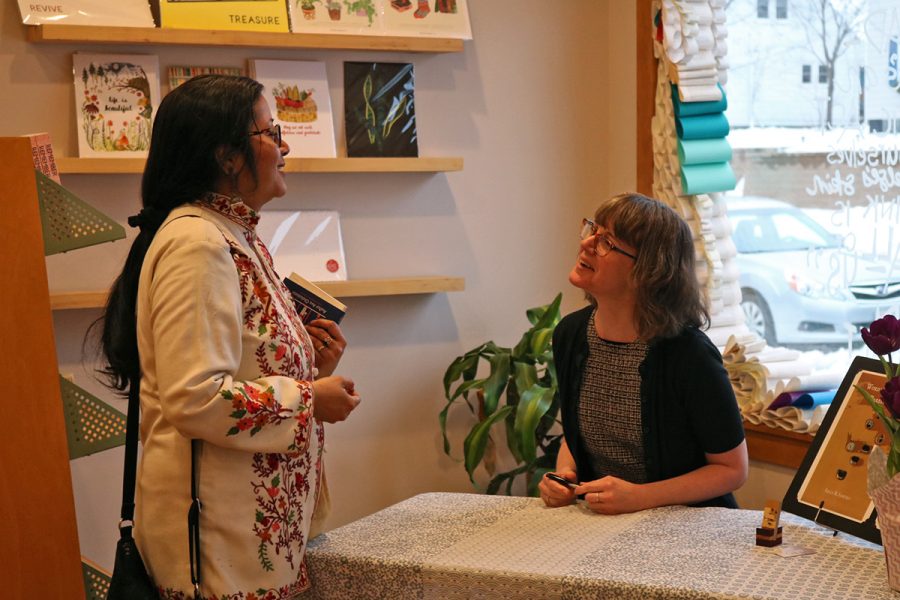 Kelly Samuels connects with fans of her latest poetry publications.

Hard-backed metal chairs were laid out in a semicircle around a wooden podium in Dotters Books, with people trickling in to start filling them.

There was hushed, but enthusiastic chatter, in the quaint bookstore.

Enter Kelly Samuels, a Viterbo university professor and poet, who read from her two most recent books at her book signing on Saturday.

“To be a good writer, you have to read a lot,” Samuels said.

At the event, she read several poems out of her two new chapbooks: “Words Some of Us Rarely Use” which was published last year, and “Zeena/Zenobia Speaks” which was published at the beginning of this year. The cover art was done by her daughter, Kate Netwal, an art major at UW-Eau Claire.

Samuels said it took two and a half years to write “Words Some of Us Rarely Use.”

“I let the app (dictionary.com) guide me while writing it.” said Samuels.

For most of her poems, Samuels said, she would wait for an interesting word to pop up on the app, and then she would write a poem focusing around that word.

Once she realized she could collect the poems into a chapbook, she said she went searching for the last five words for the last five poems, Samuels said. The chapbook has 26 poems, one for each letter of the alphabet, and is in alphabetical order.

She said it took her about six months to write “Zeena/Zenobia Speaks.”

She wrote the poems from the perspective of Zeena, the wife of Ethan Frome, from the 1911 story “Ethan Frome” by Edith Wharton, she said.

The book follows Ethan Frome throughout his life, with some emphasis on his wife Zeena/ Zenobia who married him, but did not love him. Throughout the tale, he seems to resent her for it.

In the book, Frome’s wife is described negatively, Samuels said. Samuels found this intriguing, she said.

It was as if the author wanted us to hate her, Samuels said, and she thought that was unfair. So, she decided to write from her own perspective, focusing on how unfairly Zeena’s husband treated her.

This was the fourth reading event at Dotters Books. Dotters has only been at its current location since the end of September 2018. Previous book releases include: Steve Betchkal, Nickolas Butler and Mary Shaw, who is also a UW-Eau Claire English student.

“Anytime we get people in who haven’t been in before is great,” Margaret Leonard, one of the owners of Dotters Books, said.

Samuels’ two chapbooks of poems, “Words Some of Us Rarely Use,” and “Zeena/ Zenobia Speaks” can be found at Dotters Books, or on Samuels’ website.