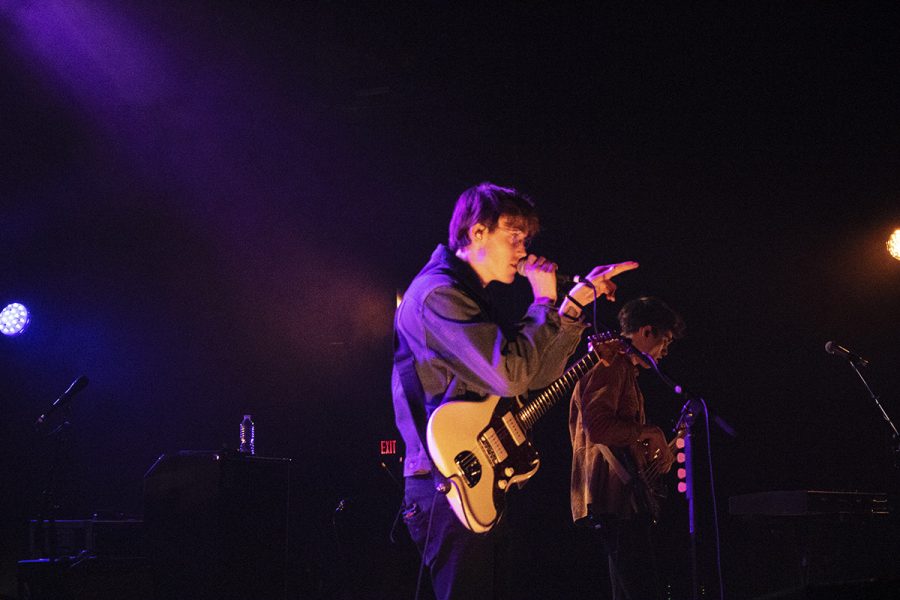 UW-Eau Claire students Izzy Bandettini and Katherine Wilmes said they consider themselves pretty big Hippo Campus fans. This vast appreciation for the St. Paul-based indie pop band is what led the first-year students to line up for the concert four hours before doors opened Saturday.

“They have this uniqueness, in a way,” Bandettini, a journalism student, said.

Portable phone charger in hand, Wilmes, a music education choral student, said she was excited to see Hippo Campus in concert again. This was Bandettini’s first time seeing the band.

Wilmes and Bandettini said they agreed the mere four hours waiting in the drizzling, mid-50-degree weather was a small price to pay for being up close during the performance.

In between songs, the band took time to joke around and talk to the audience.

“We just got back (to the United States),” Jake Luppen, Hippo Campus’ lead singer, said to the crowd in between songs. “It’s f—ing great to be back. Especially in Eau Claire now, we don’t play here enough.”

In addition to wishing they played in Eau Claire more, Hippo Campus showed their Blugold spirit by jokingly announcing they were set to join the Blugold basketball team next season after they played basketball in Zorn before doors opened. Luppen even asked the crowd what a Blugold was.

“It’s a what? It’s a bird?” he inquired, seemingly doubtful when the crowd began shouting the answer.

The band kicked off their set with one of their biggest singles, “Bambi,” which brought out some of the loudest screams of the night when the opening notes filled the arena.

Hippo Campus followed with songs from both albums, with the crowd climaxing at one of their earlier-released songs, “South.” Once the band played the first guitar riff of the single, the crowd of UW-Eau Claire students and out-of-towners alike were already screaming at the top of their lungs.

At one point during the song, the band’s guitarist, Nathan Stocker, lept on top of a speaker and pointed his microphone toward the crowd to the lead the audience in a chant of “You go down south, south.” Jumping up and down sporadically, audience members complied.

“South” kicked off a slew of crowd pleasers, like the unreleased track “No Pomegranates,” which Stocker compared to a buzzcut, a haircut he recently adopted; “Bubbles,” which features a heavy rock-out session in the middle of the otherwise mellow song; and “Suicide Saturday,” which refers to social suicide, not literal suicide.

The music wasn’t the only thing keeping the crowd entertained Saturday night, however. Hippo Campus is known for their audience and band member interaction.

It wasn’t uncommon to see Stocker strumming his guitar and making faces at the band’s trumpet player, Decarlo Jackson. Toward the end, Wilmes and Zach Sutton, the band’s bassist and keyboardist, hopped on top of the drummer’s riser and kissed each other.

“The show went great overall,” said Maddie Defosse, the co-chair of the UAC concerts committee. “It was smooth from start to finish thanks to the awesome folks at EPC, Usher Corps, Event Services and UAC. The bands were great to work with and I couldn’t have asked for a more fun night.”

1,306 tickets were sold, Defosse said, which is up significantly from last year’s Misterwives show.

Both Bandettini and Wilmes said they enjoyed the show.

“Hippo Campus was so energetic and fun and interactive with the crowd and each other,” Wilmes said on Sunday.

Bandettini said being in the front row and the band playing her favorite song made the experience all the more enjoyable.

“For (their) last song they performed ‘Violet,’ which is one of my favorites,” Bandettini said of the show, “and I’ve never been so happy.”