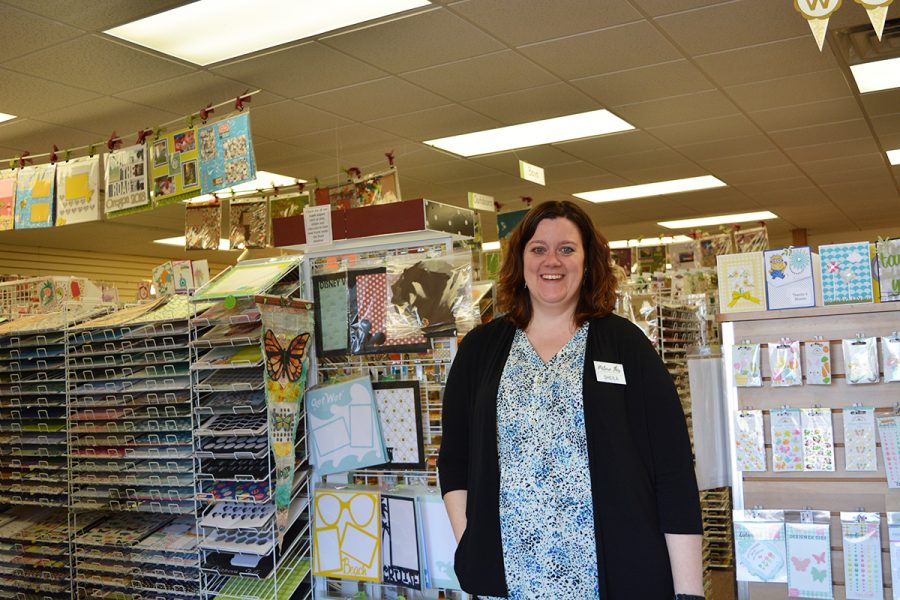 Sheila Earp has a lot of crazy ideas.

When she texted her husband while at work about a scrapbooking store for sale in Eau Claire, she said buying it was just another one of those crazy ideas.

But, this idea became reality.

On January 31, Earp became the new owner of Picture This, a scrapbooking store in Eau Claire.

“When someone asks you, if you could do anything that you wanted to do, I would always be like, oh a scrapbook store,” Earp said. “So here I am.”

It took a lot for her to get to this point. Her family — her husband, Cameron, and her children: Kayla, 14, Andrew, 12, Ben, 9 and Madeline, 5 — is still in the process of transitioning from the Twin Cities to Eau Claire, Earp said.

“She has dreamed about this for years and the opportunity presented itself,” Cameron Earp said in an email. “It is nice to see her passionate about her business.”

After kissing each of her kids goodbye as they head to school on the bus at about 7:30 a.m., Earp drives an hour and 20 minutes to the store, she said.

She usually begins her day in the office — checking emails and social media, paying bills and doing other office tasks, she said.

Earp’s office, a spacious place with plenty of room for creative designing, is a bit of a mess, she said. With markers strewn on the floor from her kids visiting, stamping catalogues and various types of crafting supplies for the store, Earp said she’s still working on making the place feel more like hers.

“It’s been kind of a rollercoaster,” Earp said.

Earp began her scrapbooking journey when she attended St. Cloud State for an accounting degree, she said. She would host “stamp camps,” or card-making classes, in her basement with friends as a  Stampin’ Up card-making demonstrator, she said.

After she graduated, she went into public accounting for about five years, financial reporting for about eight years and then transitioned to the company 3M, she said.

Once she had kids, she said, she switched to scrapbooking, and it has been her focus ever since.

Age plays a role in the love of scrapbooking or stamping, said Olivia Solberg, a senior in high school and store employee at Picture This.

“I do more cardmaking than scrapbooking,” she said. “I feel like the younger you are, the less you have to scrapbook. So, yeah, cardmaking is where it’s at.”

Solberg, who plans to go into the medical profession, said working at Picture This is relaxing — at least, more relaxing than her potential future as a phlebotomist.

During this move, Earp said she’s grateful for her employees, like Solberg, who are able to work on designing card and scrapbook page examples and do some of the classes at the store.

“The girls out here have a lot of ideas,” Earp said. “And so when they’d say something, I’d be like, ‘Oh, we should try to do that,’ and then I’d write it down.”

The best hope to saving this paper-crafting art is by offering “trendy” products that appeal to new client bases, according to the The Independent.

Picture This creates a community that reaches beyond simply crafting, said Hannah Barneson, a third-year business management student at UW-Eau Claire and store employee at Picture This.

“I think that’s really important for people to be coming into the store to feel like they’re welcome and like they want to come back, and not necessarily to buy stuff,” Barneson said. “I mean, we have some ladies that just come in and sit at the counter for three hours because they just had a bad day and they just need to be somewhere. They call it their happy place.”

Barneson, who has worked at Picture This for four years and runs a blog for cardmaking, said the retreat space in Picture This offers customers the opportunity to meet up with old friends or to make some new ones.

“I feel like I’ve come to be friends with (the people who come to retreats), even though they’re, like, 50 years older than I am,” she said.

Crafting is something that doesn’t just appeal to older generations, Barneson said.

“I’m kind of like, weirdly obsessed with it,” she said. “I just think it’s so cool to give someone something that’s handmade.”

Earp said she hopes to do more with the store once she’s settled in. She said she wants to teach more of her own classes, redecorate, do more with technology and social media and finish an email newsletter she’s been working on.

“The time goes so quickly here,” Earp said. “There’s just so much to do.”