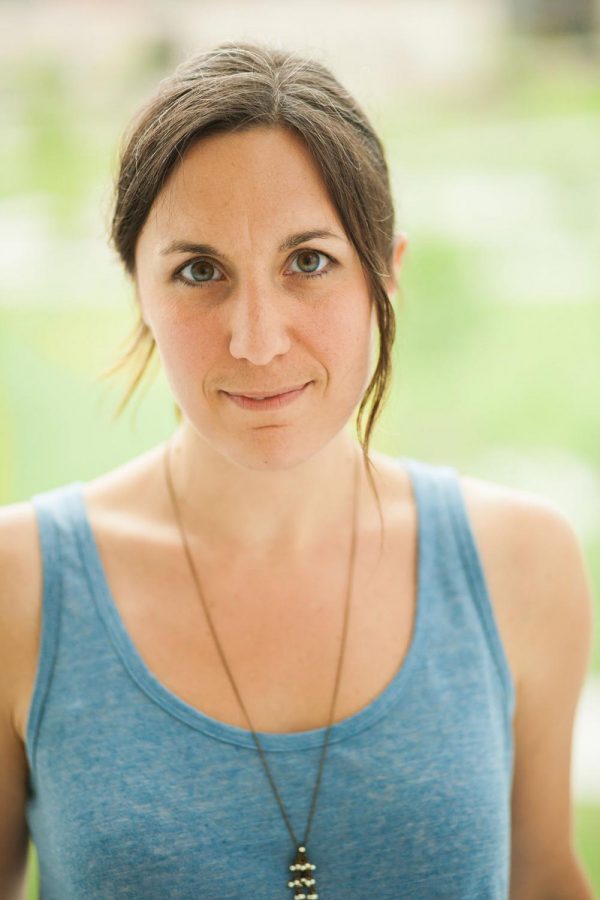 Molly Patterson, an assistant professor of English at UW-Eau Claire, is the featured author for the March’s Women Writers on Wednesday event.

On the first Wednesday of every month, a female writer from the Chippewa Valley is invited to read her work and discuss literary topics at the 200 Main Gallery in downtown Eau Claire as a part of the “Women Writers on Wednesdays” series.

Jo Ellen Burke, one of the owners of 200 Main, said this program started in December 2018. She said she and fellow owner Terry Meyer wanted to hold more events at the gallery that embraced artistic pieces beyond paintings or illustrations.

“We wanted some events that supported writers and artists in other forms,” Burke said. “Eau Claire has a real high level of quality writers.”

Burke said individuals who purchase tickets for the event can get a drink and a snack when they arrive, admire the art in the gallery and listen to the presenting author speak about their work and craft, followed by a question and answer session.

Behind the inspiration to spotlight women writers specifically, Burke said she and Meyer wanted to recognize them, and that the decision to do so felt natural.

Molly Patterson, an assistant professor of English at UW-Eau Claire, is the author for the March Women Writers on Wednesday event, and said she was flattered to be asked to present. She said she plans to read some excerpts from her novel “Rebellion” and a new novel she has been working on.

Patterson said the new novel centers around motherhood and, as a woman who is currently pregnant with her third child, she said that at the event she plans to discuss how motherhood has influenced her writing.

“Rebellion,” which was published in August of 2017, was Patterson’s first novel. Although she has finished working on it, she said she still enjoys reading from and talking about it at events because it allows her to revisit the story.

The book tells the intertwining stories of four women who live in different time periods and locations, but are all impacted by the disappearance of a missionary during the Boxer Rebellion in China, she said.

Patterson said her personal connection to China spans before it was incorporated into the plot of Rebellion. After studying abroad in China while she was in college, Patterson said she chose to live in China again after she graduated.

She said she found herself teaching there, in the town of Ya’an, and stayed for two years.

“I think I always wanted to have that experience of living in a place for awhile,” Patterson said. “I sort of wanted to get outside of my comfort zone and live in a place where I wasn’t surrounded by other foreigners.”

She had studied Chinese while in college, so she said she was drawn to this country specifically, both in her study abroad experience and life after graduating, because she could speak the language. In addition to her knowledge of Chinese, Patterson said she did truly love living in China.

Regarding her inspiration for writing “Rebellion,” Patterson said, after leaving China, she felt like there were two versions of herself — the one who resided in America and the one who lived in China. She said she felt her personality contrasted based on which country she was living in.

“Living in a place where you’re speaking a different language, and a language that’s not native to you particularly, I did feel that my personality was quite different,” Patterson said. “(China) did sort of permanently change me.”

Patterson said there were some aspects of life that she readapted to when she returned to the United States. However, she said she was definitely more outgoing in China, in comparison to her normally-shy personality in America.

“I think a lot of it has to do with language, but a lot of it is sort of being like an outsider in a place and how you are sort of forced to put yourself out there more,” Patterson said.

Amidst the passion and experiences that draw her to writing, Patterson will now join a group of three other women who have presented in the Women Writers on Wednesday series.

Jan Carroll, a local author, Volume One contributor and host of the 6×6 Reading Series, read several of her poems when she presented in February, and she said the setting was more intimate in comparison to other places where authors are separated from their audiences.

“You’re separate from your listeners when you’re at a podium, so (this was) much more personal,” Carroll said. “The setting helped people to interact with the poems.”

Patti See, who is a local author, an academic advisor and a senior lecturer at UW-Eau Claire, was the presenter at the Women Writers on Wednesday event for January, and said she admires the venue as well, for how it contains writing and art in one space.

Patterson said she admires this event’s decision to highlight women in the literary community because there are many great writers in the Chippewa Valley, but this series gives acknowledgement and voice to female writers specifically.

“I think there’s still a little bit of bias in the publishing industry — particularly in the critical community, sort of book criticism, where men are given more space, but you see less of that when it’s female authors, especially if they’re writing about women,” Patterson said. “This event is just one small part of trying to give that space to women. It’s okay for women writers to have that space too.”

Tickets for the Women Writers on Wednesday events can be purchased on 200main.org.