Hippo Campus is coming to campus

Find out what to expect when the St. Paul-based band comes to UWEC 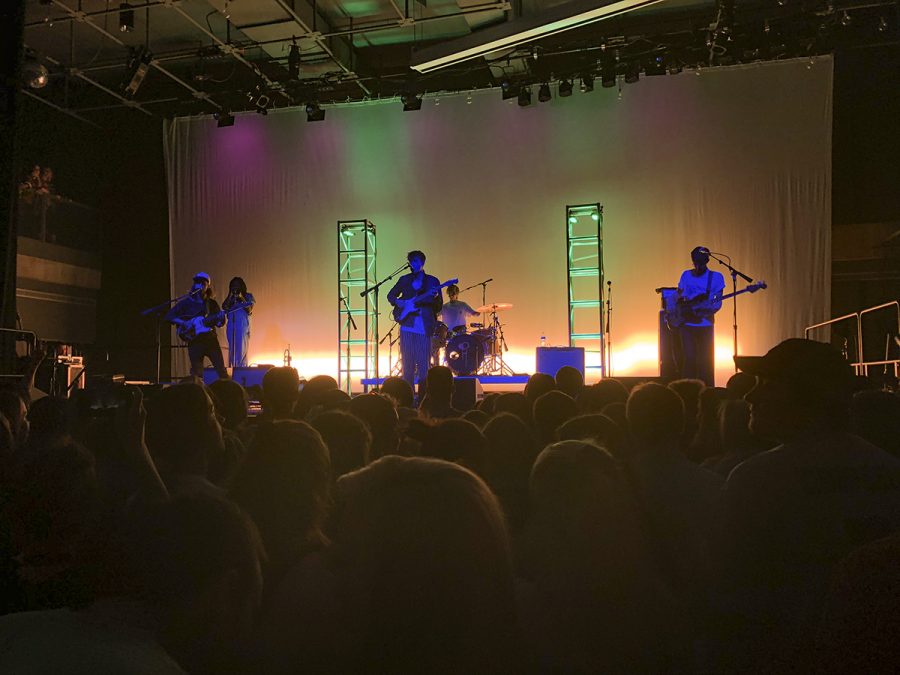 Hippo Campus performs at a concert at UW-River Falls in May 2018.

As the lights dimmed, the crowd cheered. Shadows of the band members walking on stage were easy to make out, each person walking to their instruments and microphones.

The beginning notes to Hippo Campus’ latest single, “Bambi” started up and the crowd went wild, recognizing the tune immediately. The hype lasts the entire show, regardless of the mood and popularity of the song being performed.

This energy and excitement displayed at Hippo Campus’ St. Paul concert last November is typical of their shows, and Blugolds are about to find this out for themselves, said Zach Netten, co-chair of the University Activities Commission concert committee.

The UAC announced last month that Hippo Campus will headline this year’s spring concert. The performance is set for 7:30 p.m. on Saturday, April 6 in Zorn Arena.

Hippo Campus, a self-described “kinda pop” band from St. Paul, has quickly evolved from playing at festivals in the Twin Cities to headlining a world tour.

The band is known to play some of their most well-known songs — all the way from 2015’s “South” to last year’s “Bambi” — and splashing in some lesser-known ones — such as “warm glow” or the not-yet-released “No Pomegranates.”

Hillary Smith, a fourth-year English student at UW-Eau Claire, said she’s excited to be attending the show next month.

“I am super excited to hear Bambi, their most recent album, live and hopefully some throwbacks as well,” Smith said. “I love ‘Way It Goes,’ so I hope they perform some of those songs as well as some from their EP (‘South’ and ‘warm glow’).”

“This is the first year I’ve really heard people talking about it where I haven’t brought it up,” Defosse, a fourth-year organizational communication student, said. “I’ve just been out and people have been talking about it and I’m like, ‘Yes, talk about it more.’”

Attendance for last year’s spring concert, which indie-pop band Misterwives headlined, was down, Defosse said. She said she’s hoping more people will attend with a local, well-known band as the headliner.

Hundreds of tickets were sold when tickets went on sale, and Defosse said she expects another spike in ticket sales just before the event.

On their current tour — appropriately named the “Bambi” tour, after their newest album — Hippo Campus is staying on brand with their performances. Hippo Campus is known for their audience interaction and having the crowd sing a lot of their lyrics back to them — whether it be the chorus of “las” in “Poems” or the end-of-the-song chant in “Buttercup.”

“They get the crowd into it a lot,” Netten said. “… It will be cool to interact with them. … I always love live music.”

Defosse and Netten said they agreed that they want this concert to be accessible to UW-Eau Claire students. Despite music preferences, Defosse said everyone should attend the concert.

Check out this short video of a performance of “South” from last May:

Check out this playlist to get acquainted with Hippo Campus before the show: