Six readers, six minutes and a theme of Earth 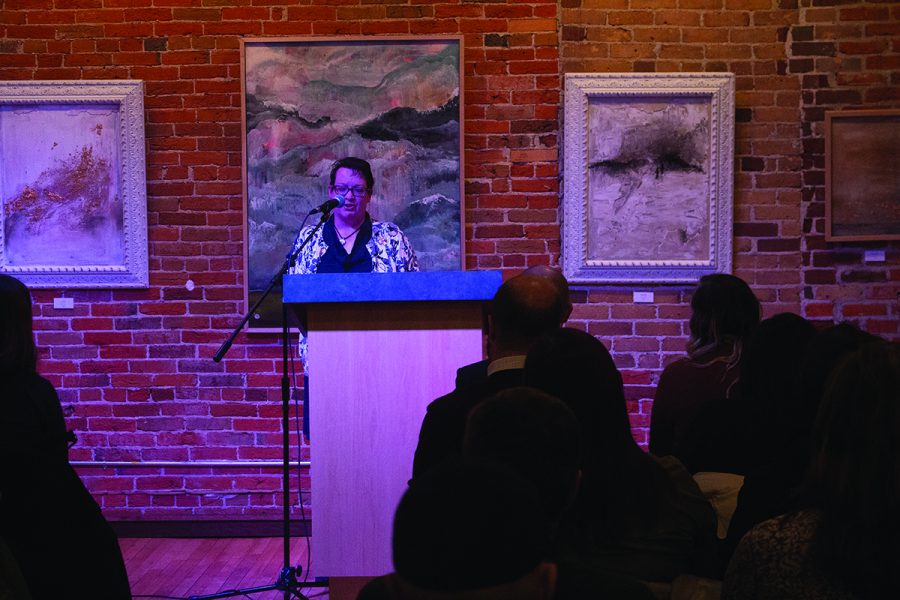 Jessi Peterson reads some of her work at the 6x6 Reading Series event on Tuesday. Readers at the event are only allowed six minutes to read their pieces before the next reader steps up.

In an event intended to allow fresh voices — and writing — to be heard around the Chippewa Valley, the quarterly “6×6 Reading Series” allowed for just that: six readers for six minutes each.

In this series, local writers Kate Hinnant, Max Garland, Greg Gilbertson, Jacob Gruetzman Samantha Kobs and Jessi Peterson gathered at the Local Store on Tuesday to read their pieces to the audience.

“We invite six writers to speak, and then they are never invited back to this reading series,” said BJ Hollars, an associate professor of English and a coordinator of the series. “It’s not because we’re mad at them — unless they go on for 12 minutes — but it’s because we want to make sure we always have space for new readers.”

The reading series originally came about after Hollars and Jan Carroll — a Volume One contributor and the organizer of the series — brainstormed the idea as a way to expose the community to the local writing scene.

Carroll said she and Hollars, who also work together at the Chippewa Valley Writers Guild, drew inspiration from the music scene in Eau Claire.

Carroll said she knows many musicians who are involved in one band, but also play in multiple others, and collaborate with other musicians — often regardless of their popularity or backgrounds.

“I thought maybe we could do something like that in the writing community,” Carroll said. “Where we have a mixture of experienced writers and beginner writers and writers of different ages and backgrounds and just try to make that a regular event.”

Each reading series focuses on a different theme and the readers must write original pieces specifically for the event, Carroll said. The readers at the March 5 event read pieces that matched the theme of “Earth.”

For Kate Hinnant, one of the readers at the event, it gave her the chance to focus on her writing in a way that she hadn’t done in a while, she said. Also the head of inspection and communication at McIntyre Library, Hinnant said her poems usually take her two months to write.

“It’s kind of nice to have that kind of pressure that compresses your writing and focus,” Hinnant said. “When I was in my twenties, I was writing one (poem) a week, and as I got older, it takes a lot longer. Probably because I’ve got a full-time job.”

One of the pieces Hinnant wrote for the series, titled “Cremation,” came from Hinnant trying to think about the theme. She said she thought of the overturned earth of her grandmother’s grave, and she wanted to include a more personal element to her piece to share with the audience.

“It’s really cool that we have these opportunities now in Eau Claire — this wasn’t happening 10 years ago or 15 years ago,” Hinnant said. “It’s nice that events like 6×6 give people a way to gather as a writing community, and just gather as a community, to support writing in a way that wasn’t here before.”