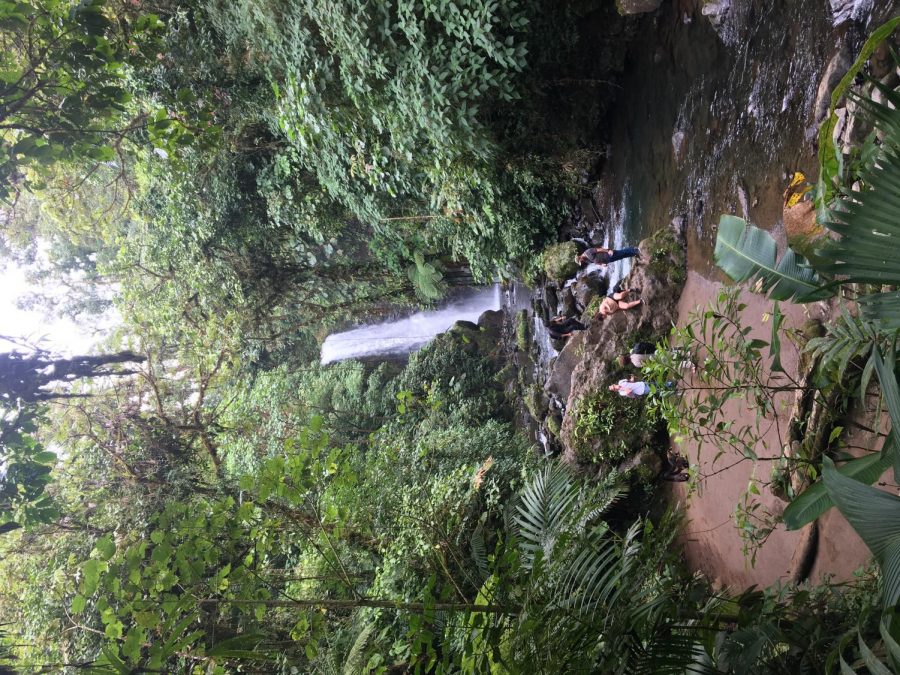 A hibiscus flower Huggett found on the UNA campus, One of the waterfalls at La Paz Waterfall.

Ever since I was little, I’ve always dreamed of studying abroad, traveling to new places and meeting interesting people. Admittedly when I was young and thought of studying abroad, I always thought of Europe or some English speaking country would be the place for me. However, when deciding where to go and how to best fulfill my Latin American Studies immersion requirement, the warm sandy beaches, impressive biodiversity and relaxed pura vida lifestyle of Costa Rica began calling my name.

Now, roughly a year later I’m finally here, and I’ve been living in Heredia, Costa Rica for a little over three weeks. I’m studying here through UW-Eau Claire’s Study Abroad Program and University Studies Abroad Consortium and attending the university here in Heredia, Universidad Nacional de Costa Rica. It’s about a seven to 10 minute walk from my host family’s house every day and the view of the mountains every morning is breathtaking.

So what exactly does Pura Vida mean? Based off my understanding it’s more than just a saying, it’s living your life in a relaxed manner and enjoying every day. Pura Vida when translated directly from Spanish means ‘pure life.’ Ticos, or Costa Ricans, use the phrase to describe how they’re feeling, the state of something, and as a greeting or to say goodbye. There are numerous uses for the phrase, many of which I’m still learning. With time I hope to achieve a clearer understanding of Pura Vida.

When I talked with my host mom about Pura Vida, she described the average Tico for me. Typically speaking, Ticos are very friendly and talkative people. They also love to help their neighbors and the majority are Catholic.

Another important part of Costa Rican culture is Tico time. Tico time is used when you’re referring to a more relaxed time schedule. It’s part of the local culture and it’s nice not to be dominated by the clock.

Here’s an example: if I planned to meet with friends around 1:00 p.m. for coffee I might start getting anxious when they didn’t show up right at 1:00 p.m. However if I was a Tica and we planned for 1:00 p.m. and don’t actually meet up until 1:15 p.m. or 1:30 p.m. it wouldn’t bother me. I’d just say we were on tico time. It’s not to say that ticos aren’t punctual, they just have a more carefree outlook on the concept of time.

Some additional phrases and words I’ve picked up while here include: tuanis, !qué chiva!, and tranquila. Tuanis is the Tico slang equivalent of ‘awesome’ or ‘cool.’ !Qué chiva! when translated is also very similar to tuanis in that it means ‘how cool.’ Tranquilia, in my opinion, is the second most commonly used word here in sunny Costa Rica after Pura Vida. When translated it means ‘take it easy’ or ‘be calm.’ My host mom says it to me frequently as I adjust to Tico Time and the Pura Vida lifestyle here.