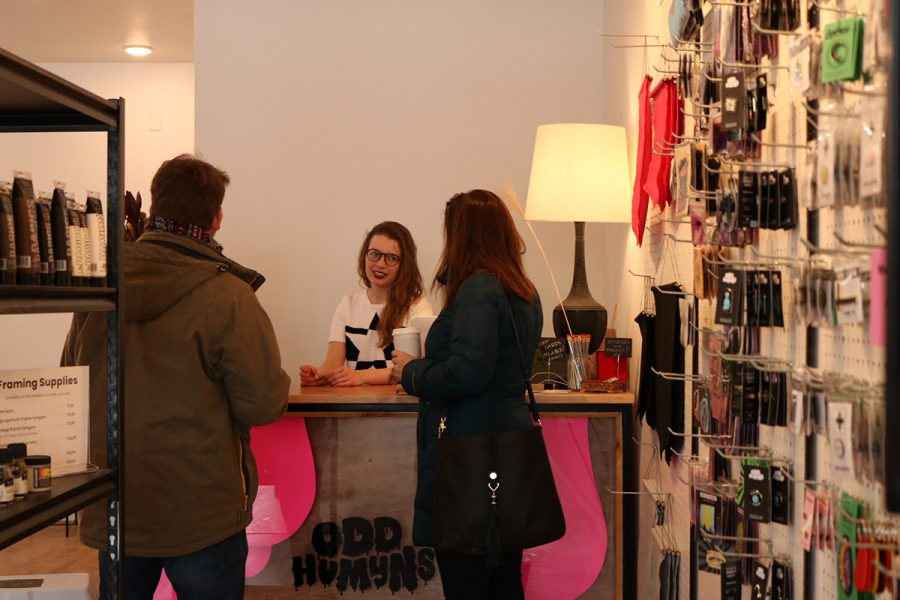 People come in all sorts of shapes, sizes, colors, abilities and talents. Often, people ascribe to the idea of “normal” and other people are assigned the term “odd” or “different.” Enter Odd Humyns, a self-proclaimed birthplace for odd artistic masterpieces, graphic design work and expressive pins which recently celebrated the grand opening of its shop on Barstow Street.

Co-founders Elle McGee and Serena Wagner said they wanted to open an art shop to express individuality and uniqueness, hence the name Odd Humyns. The store offers the ability to express oneself through a selection of artistic items.

“We wanted to offer the people of Eau Claire a spot to appreciate the art culture of this city,” McGee said. “We wanted to inspire to create. It’s an art community we’re celebrating.”

Odd Humyns, which officially opened its brick-and-mortar store on Feb. 2, provides a variety of art materials for local artists to peruse including acrylic paint, brushes, canvases, drawing pads and pens, and it features a wall of pins and patches. They also offer graphic design services to companies and local businesses.

Why pins? McGee said they are a form of art themselves.

“Pins are like a small artistic showcase, tiny little pieces of art, like a mini gallery,” McGee said. “We sell pins from designers and also create our own.”

McGee and Wagner were both students at UW-Eau Claire when they met through a graphic design class. They said they worked separately for two years, but eventually decided that, with their complementary skills, they would make a great team. They created Odd Brand Strategy, a graphic design studio, in 2016. For two years they created graphic designs for businesses in Eau Claire, but they said it was always in the back of their minds to open up their own art store. Three years later, their dream finally came true.

Odd Humyns sells pins expressing uniqueness, support for feminism, people who identify as LGBTQ and other depictions of self in an “odd” way.

Lindsay Faith, an art enthusiast who attended the grand opening, said she loved collecting pins as a kid, and she’s happy to see McGee and Wagner continuing the tradition for many youth down the road.

“I love the nostalgic aspect to it,” Faith said of collecting pins. “I used to collect them as a kid. They’re also so unique, you can express yourself with these tiny little things.”

“It’s just the two of us,” McGee said, referring to her and Faith. “We work with local contractors in town to keep a local community. We want to be a small art store for students and the people of Eau Claire.”

Before they opened up Odd Humyns, the store was a salon named Brush-N-Style, which was also run by women. McGee and Wagner said they are proud to continue the female entrepreneur legacy, and in the basement of the shop is a small venue they named The Salon to honor the previous owners. The venue will have 1-2 events a month, ranging from comedy to live shows. They will also periodically host art workshops, educating people on multiple types of creative media.