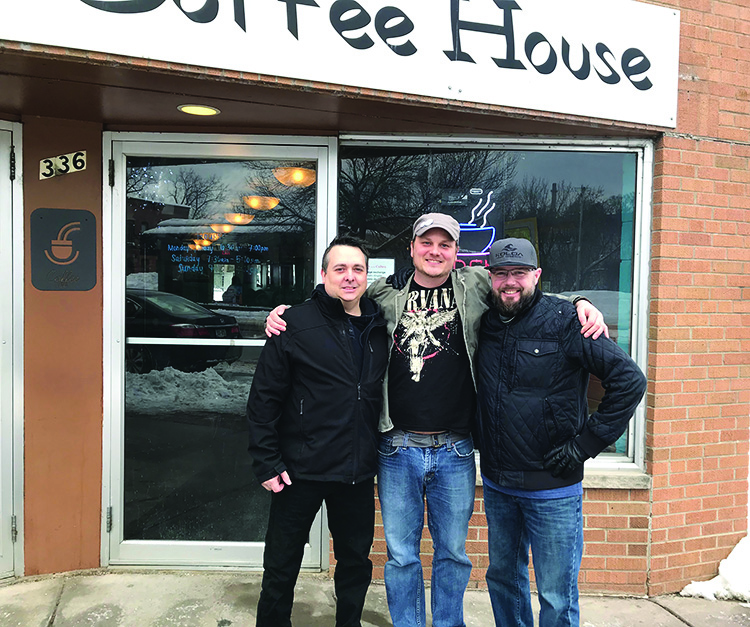 Lance Harris, Brian Bethke and Mike Johnson are part of the Broken Eights, with the fourth member Derrick Biederman not pictured.

Children of the ‘90s and early ‘00s may remember “MTV Unplugged” and “VH1 Storytellers” playing on old television sets in their childhood. Thanks to the efforts of Converge Radio and the Chippewa Valley Public Library, these shows are being paid homage in a new way.

According to a press release from Converge Radio, a new series of concerts, called “Unplugged at the Library,” will be taking place in the next few months and will feature local music artists.

Five music groups will perform in the series, performing every other Friday. The series will kick off Feb. 22 with the Broken Eights. Elvessa will perform on March 8, followed by Jim Pullman on March 22; Joyann Parker on April 5; and Pit Wagon on April 19. All performances will take place at 7 p.m. in the Chippewa Valley Public Library.

“I’m really excited for this and looking forward to it — working with Converge,” Joe Niese, the Chippewa Falls Public Library director, said. “I hope that it might be an annual thing.”

The Unplugged series, sponsored by the Business Friends of the Chippewa Valley Public Library, will have the performing artist or band perform two sets of music, Niese said. In addition, Scott Morfitt, the station manager of Converge, said Converge contracted Toy Car Studios for technical assistance.

In between the sets, Morfitt will do a Q&A session with them. In addition, the music artists will perform stripped or acoustic versions of their songs.

While there may be a Facebook Live streaming of the concerts, Morfitt said the best way to experience the music is in person.

“The ‘lion’s share’ of the work is in artist coordination,” Morfitt said. “We start this process with a dream list of artists. From there we do inquiries for each one to see if their available dates meet ours.”

Morfitt said much of the work done to promote the series is done by students on the marketing team.

Mike “Riff” Johnson, lead guitar of the Broken Eights — one of the musicians to perform as a part of the Unplugged series — said that this series offers its artists something as well. For Johnson, it allows his group to step out of their typical bar setting, he said.

“It’s nice to kind of expand that into where more diverse age groups can hear our music,” Lance Harris, the bass player of the band, said. “We do appeal to several different types of audiences, so being in that setting and being acoustic is kind of a way to step outside of the bar scene.”

Originally starting as a Nirvana cover band, the Broken Eights has four members, including drummer Derrick Biederman and lead singer Brian Bethke, who also plays in a few other bands and does his own solo work.

“We had an acoustic rehearsal the other night,” Harris said. “Our music transpires to acoustic very well.”

Johnson said, while they don’t have a set list for the show yet, they plan to feel out what will work and possibly improvise if necessary

“Sometimes we change it up a bit too,” Johnson said. “If no one’s reacting to anything we’ll be like ‘well maybe we should tone it down’ or ‘maybe we should bring it up,’ so we do things on the fly a little bit.”

While the series is open to all audiences, Niese also said he wants UW-Eau Claire students in particular to consider attending. The Unplugged series offers a music scene in the months before the summer concert series starts up, Niese said.

“It can kind of be insular when you just don’t go anywhere besides Water Street,” Niese said. “It might be an opportunity for students to come up to Chippewa Falls and check out the cool stuff that’s going on up here.”