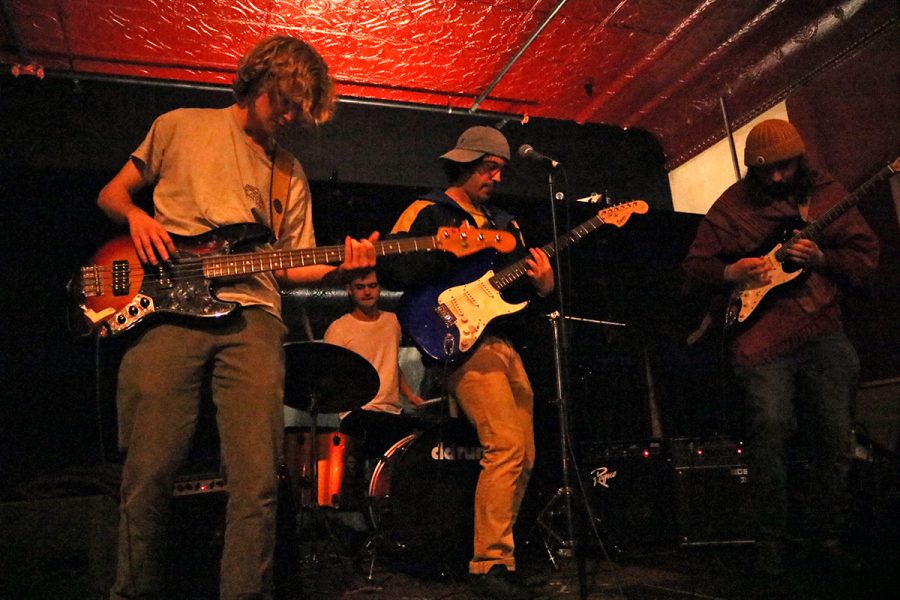 The band Asparagus rocks out at The Plus — their first official performance at a venue.

Music has the ability to express emotions when plain words won’t suffice. It exaggerates things normal speech can’t. Sometimes certain chords or the musicality of the language can invoke different emotions.

Friday night, four local bands had the chance to express themselves in a rock and roll manner. The Third Ward, LOi!L Pride, Asparagus and Midwest Voltage performed at The Venue in downtown Eau Claire for their local fans to jam.

The music group Asparagus was invited by The Third Ward to perform at The Venue, making their first venue debut. The band comprises CJ Springett as lead singer/guitarist, Jack Matuseski as bassist, Dionigi Aluni as guitarist and Zach Netten on drums. All four members attend UW- Eau Claire as third-year students.

“It all started our freshman year in the UW-Eau Claire class of 2020 group chat,” Springett said. “Jack was the one to get everyone together, he was looking for people for a band and it just kind of happened.”

Matuseski’s parents, Dave and Peg Matuseski were there cheering them on.

“All of those songs were originals and there’s a lot of talent,” Peg Matuseski said. “The music is easy to listen to and not too hard. It’s kind of alternative rock, it’s not heavy. Like cross generation.”

The band LOi!L Pride said they express their thoughts through hard metal.

“It stems from being true to yourself,” Mier Oi, the lead singer, said. “When we have our opinions and thoughts, that’s just what it is.”

Oi and his wife, Amy Oi, moved to Wisconsin from the west coast. He said he taught his wife to play the drums.

The couple’s band years slowed when they had their first child, Mier Oi said. For some time, the two had been in search of a new bass player. Mier Oi said they met their current bass player, Joe Frost, through their children at school. Frost said he told the two he was a bass player and to keep him in mind if they ever needed someone. This was the beginning of a lifelong friendship for the band, Mier Oi said.

“Nothing but respect for the dude,” Mier Oi said. “He’s just a sporadic guy.”

Following LOi!L Pride, Midwest Voltage performed their progressive rock music, which set them apart from the night’s scene; however, their style of music ranges anywhere from indie rock to grunge. Matt Smith and twin brothers Andrew and Hugh Rose said they have been performing in the LaCrosse area for more than 20 years. Together, they form their original sound with what the band describes as “simple, catchy and tight riffs.”

Toward the end of the night, The Third Ward put out their punk style for everyone to hear. The band originates in Eau Claire, which consists of four members, Alex Hoff, or Gustav, the guitarist, Clay Lespool the bassist, Anthony Allen on drums and Zavier Balow as lead singer. Hoff said the band took off when they jammed out together and figured out what kind of music fits their likings.

Brett Mans, a friend of the members of Asparagus, voiced his appreciation of the band.

“I haven’t heard anything like it,” Mans said. “They have really good chemistry together. It’s just unique music.”