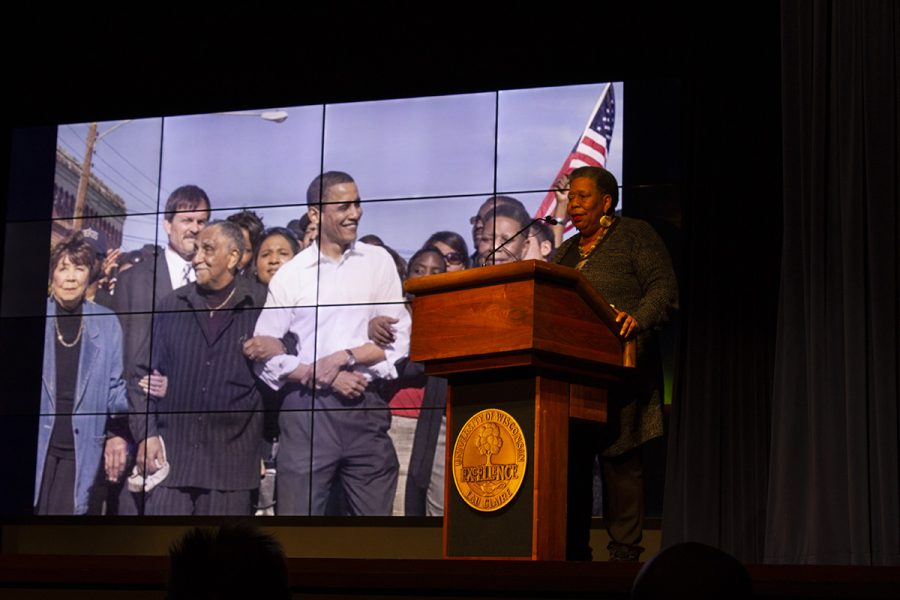 Joanne Bland, the keynote speaker at the Martin Luther King Jr. event last Wednesday, discussed her participation in the Student Non-Violent Coordinating Committee in the 1960s, among other topics.

The event allowed several students the opportunity to speak and highlight their work on campus.

Darius Sims, the president of Black Male Empowerment and a UW-Eau Claire sociology student, said he and other students will not accept hate and oppression.

The keynote speaker of the night was Joanne Bland. Bland is a Civil Rights activist who began advocating black rights at a young age in the early 1960s. As part of the Student Non-Violent Coordinating Committee, she said she participated in several marches, including “Bloody Sunday,” “Turn Around Tuesday” and the first leg of the march from Selma to Montgomery. By the time she turned 11 years old, she had been arrested 13 times for her activism.

Bland described her experience marching with King from Selma to Montgomery in 1965 as a part of her presentation.

“On March 21, we left Brown Chapel one more time and came over that same Edmund Pettus Bridge and the same policemen that beat us had to protect us,” Bland said. “Fifty-four miles, five days it took to get to that capital. There are no hotels between Selma and Montgomery today and there were none then. It started raining on the second day — and do you know, Aug. 6 of that very same year, just a few days short of six months later, the Voting Rights Act was signed.”

Bland said every time she heard King give a speech she was inspired. Bland urged the young people in the crowd to feel the same urgency for change she still feels today.

Rose-Marie Avin was given the Martin Luther King 2019 Social Justice Leadership Award. Avin earned her doctorate in economics at the University of Maryland-College Park. She is the first black female director of the women’s, gender and sexaulity studies program at UW-Eau Claire. She also teaches in the economics, Latin American studies and American Indian studies departments.

Out of the 1,300 employees at UW-Eau Claire, 24 are black, said Tamara Johnson, the Vice Chancellor for Equity, Diversity and Inclusion and Student Affairs.

Avin is the longest employed of the 24 — she has worked at UW-Eau Claire for almost 32 years. She is the co-founder of a project in Madison that works toward empowering women in Nicaragua.

Avin said it may seem odd that a woman of color has stayed at a university that is predominately white for such a long time. Avin explains she found roots in her activism, had a strong sense of self and made connections.

The crowd showered each performance with applause and multiple received standing ovations.

As the night drew to a close, the flicker of battery-operated candles lit up the auditorium with an orange glow. The beams swayed to the song “We Shall Overcome.” When the song ended, the names of several black men and women who died because of racial violence were displayed on the screen. These names included Trayvon Martin, Sandra Bland, Tamir Rice and more. Michael Thomas, the event organizer, said the list is far from complete.

MacKenzie Langham, a first-year undeclared student at UW-Eau Claire, said the event was a worthwhile way to spend her Wednesday evening.

“We’re just a predominately white institution, and just to have this event here is so important and so inclusive and I’m glad that they did that,” Langham said. “As far as (the future), I think just continue making change and the fact that we’re not where we need to be.”

UW-Eau Claire will host a variety of events celebrating black culture in the upcoming weeks for Black History Month, including film showings and discussions. More information can be found on the university’s event calendar.

Neupert can be reached at [email protected]