Bringing fantasy and fairytales to life in Cabaret 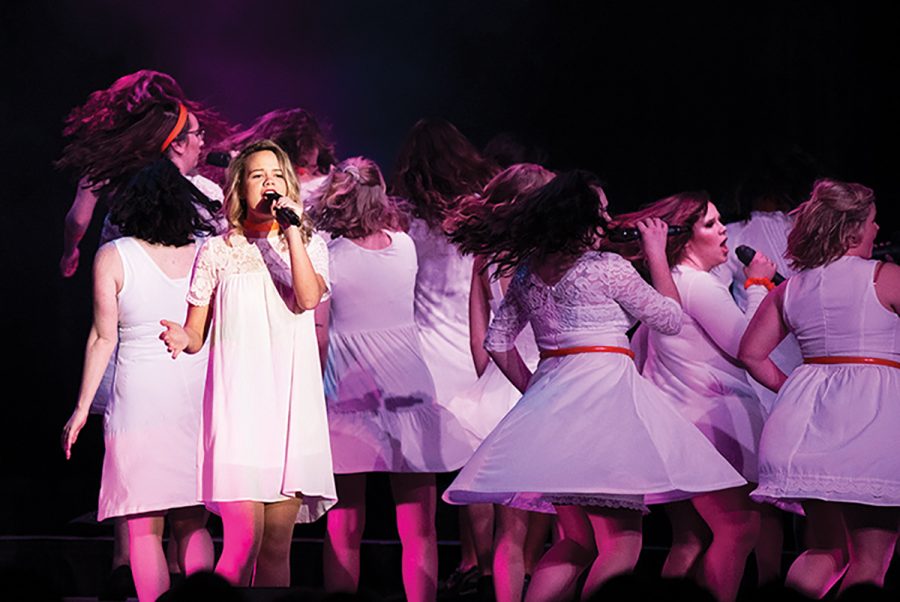 Cabaret members perform songs that lead the audience on a journey through the 2019 Storybook themed show.

As a child, the magic found in the Grimm’s fairytales and Mother Goose’s nursery rhymes is believable. Parents tuck their children into bed, telling stories of Pinocchio or Alice in Wonderland, and the adventures come to life in the child’s limitless imagination. Then, as the child grows older, they come to an understanding that these stories are nothing but a fantasy. Somewhere along the way, the magic the stories used to hold slowly fades away.

Turning back the clock, this year’s Cabaret production recaptures the original magic of these fairytales, utilizing colorful lighting and powerful choreography to bring these previously two-dimensional stories to life.

The story is set into motion as a mishap between the characters Father Grimm and Mother Goose, played by Tristan Wilkes, a third-year student, and Laine Vanden, a second-year student. Boom, causes an unfinished character to be created without a story or purpose. This nondescript character, named ‘Character,’ played by Michelle Sheahan, a third-year student, journeys through multiple different well- known fairytales in order to find their place in this make-believe world.

The production features both old and new songs of all genres, which help to tell the story of each fairytale during the character’s struggle to find a home. Through the performance of songs such as “Woods” by Bon Iver and “Hungry like the Wolf” by Duran Duran, the UW-Eau Claire Cabaret cast was able to reinvent and retell traditional tales such as Little Red Riding Hood.

Dr. Frank Watkins, the Executive Director of Cabaret, said students were able to use their creative talent to display a journey of self-discovery and acceptance in this year’s production.

“Every year, we try to reinvent the show and make it more socially and culturally relevant,” Watkins said. “The students explore complex ideas and issues and find ways to then come to life through music.”

Through dance numbers and songs performed by the Blue Ensemble, the Gold Ensemble, the Women’s Concert Chorale, and the Singing Statesmen, the show did just that.

The seamless interweaving of important issues within the context of the fairytales did not go unnoticed by the audience. One audience member, UW-Eau Claire alumna Cheryl Budnaitis, enjoyed the creativity involved in displaying Character’s struggle in finding a place to belong.

“I liked how it flowed from music to music, and you kind of had this backstory of the character that you could read if you wanted.”

It is no accident that this show was so impactful, as immense hard work and dedication went into creating the final product. Aaron Tenner, a second year student who performed in the Singing Statesmen group, explained just how determined and dedicated those students were to create a successful show.

“We started practice in early October,” Tenner said. “We rehearsed once a week for a couple hours and that was throughout most of the first semester, and just in the past week we’ve been rehearsing about 12 hour days.”

The extensive amount of work put into creating the show made it well worth it for Bonnie Graff, another UW-Eau Claire alumna, to attend.

“This is my first time here,”Graff said. “I thought it was phenomenal. I was very impressed with the talent, the singing, the choreography, just the whole rounded out picture.”

Budnaitis said she felt the same way, conveying her praise for all performing groups involved.

“The energy of it is something everyone needs to experience,” Budnaitias said.