Women’s Night at The Plus showcases local poets, singers and comics 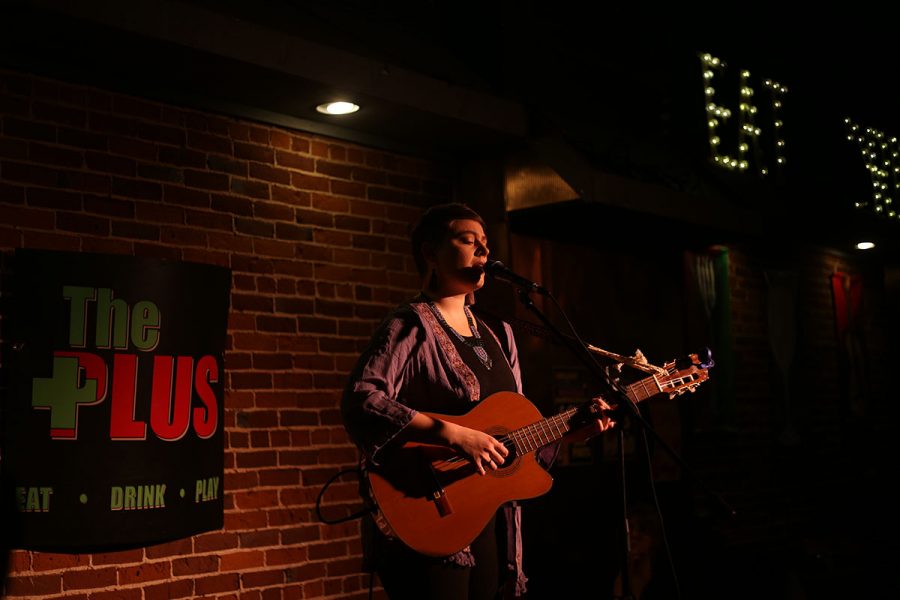 Elvessa sings and plays guitar Monday night at The Plus.

The topic of men was a common thread throughout the performances at Women’s Night at The Plus on Monday night. Sexual harassment and a general critique of the patriarchy were just a couple of topics presented during the women’s only open mic night.

Several women took the stage during Women’s Night, performing either music, poetry or comedy. These women frequently participate in The Plus’ Tuesday open mic nights and that’s where a lot of them met, said Maggie Stich, one of the organizers of the event.

Those Tuesday open mic nights have a tendency to be male-dominated, Stich said on stage, so they saw a need for Women’s Night.

“Every night is men’s night,” said one comic at the event, The Spectator’s own Alyssa Anderson. “Every day is men’s day and then it becomes night and it’s men’s night. Can’t I have one night?”

The first poet, Stich, read poetry about exes, relationships and harassment. Her final poem, “Exhale,” was about a man who had repeatedly sexually harassed her. Due to its content, reading it out loud made her nervous, she said.

Another organizer of the event, Hannah Kabelitz, listed off the many reasons she had for not listening to men during her comedy set later in the evening.

Sarah Coffey, another comic, listed off a variety of “firsts” she had this year, including her first speeding ticket. She joked that her regret was not the $200 ticket she received for going 20-miles-per-hour over the speed limit. Her regret, she said, was speeding that much so she could be on time for a Tinder date.

Jerrika Christianson, Caitlin McGarvey and Elvessa sang and played guitars Monday evening. Each of them performed a few songs, a mix of covers and originals.

Christianson spoke of the attachment she feels to The Plus’ open mic night.

“My album was basically born at this open mic on Tuesdays,” she said between songs.

One poet, Anna Schwanebeck, read poems about her experience working on a campaign in Madison this year.

“Have you ever missed Eau Claire like this?” she read. “While you’re mouthing every word to a Bon Iver set that he’s playing for Tammy Baldwin.”

Following Schwanebeck was Chloe Ackerman, who read four poems, each of which represented a season. Her writing tends to go along with the season in which she’s writing poetry, she said. Her first poem, which resembled spring, was about her mother.

“I’ve been in love since the day I was born,” Ackerman read. “First with you, then with the flowers.”

Ashley Buenger of Eau Claire and her boyfriend, Frank Espinoza of Oregon, attended the show Monday evening because Buenger wanted to bring him to see it while he was visiting.

”It’s really cool to have something that just features women,” Buenger said. “We don’t have a lot of stuff like this here.”

Espinoza agreed, and said his favorite parts were the comics and the musicians.

“It’s great exposure for the people involved,” he said.

While this was the first installment of Women’s Night at The Plus, the organizers agreed that they would like to hold more of them in the future.

“Since we really want more women to be a part of the scene here (at The Plus open mic),” Kabelitz said, “we (hosted) this all women’s show.”