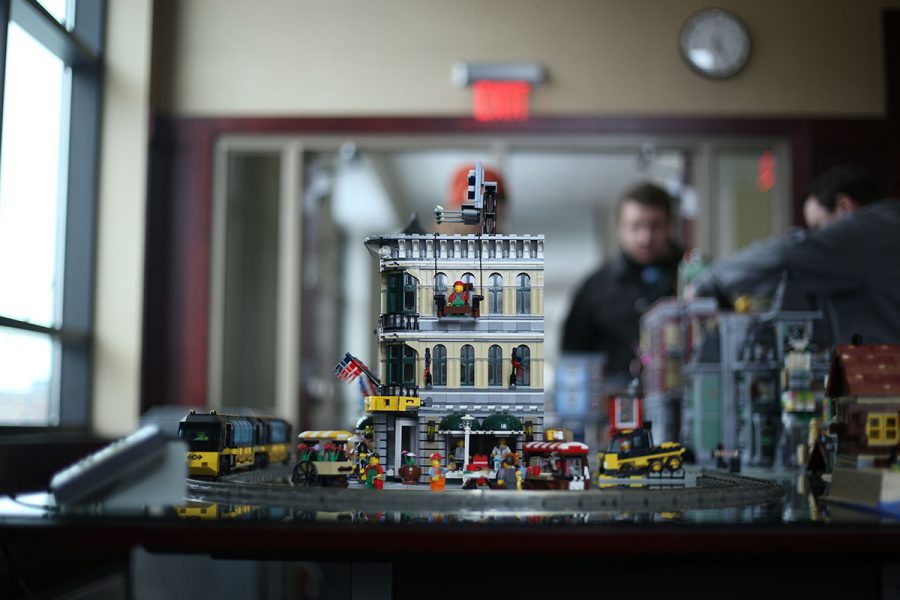 Legos were presented in the alumni room with a number of castles, characters and machines.

On the third floor of UW-Eau Claire’s Davies Student Center, attendees of this year’s GEEKcon had the opportunity to experience cosplayers walking around in elaborate costumes, eat free popcorn provided by TV10 and browse more than 80 different vendor tables.

Sponsored by TV10, this year’s GEEKcon was organized by UW-Eau Claire’s CJ 351 Strategic Event Planning class. The course is taught by Nicole Schultz, an associate professor, along with Rob Mattison from Learning and Technology Services.

According to Volume One’s website, the cost of admission was $5 or two non-perishable food items for the general public. The convention was free for UW-Eau Claire’s faculty and students.

One person who attended the event was Summer Clark, a fourth-year student at UW-Eau Claire. Clark was dressed up as Midoriya Izuku from MyHero Academia.

“I really enjoy dressing up,” Clark said. “I love making the cosplays and trying to get as close to the character as possible.”

GEEKcon offered several panels for convention attendees. Some of the panels included topics like cosplay, history of comic book superheros and how to create and produce board games.

There was also a room dedicated to Lego creations and an ESports room with a League of Legends tournament, Super Smash Bros. tournament and other video games.

“I think we’ve talked to a lot of people,” Lisa Lambert said. “We were here last year. A lot of people come up and said they remember Truck Off from last year — that was the new game. (SwordCrafters) is the new game this year so it’s been cool to hear people remember it and really like the game and it’s great to get that feedback.”

Support from UW-Eau Claire LTS and TV10 were important to the success of the convention, Thomas Xiong, a fourth-year student and media director for GEEKcon, said.

“None of this would be possible without sponsorship and donations from them,” Xiong said.

Next year UW-Eau Claire students interested in displaying their passions and interests can do so at Geekcon for free, Xiong said.