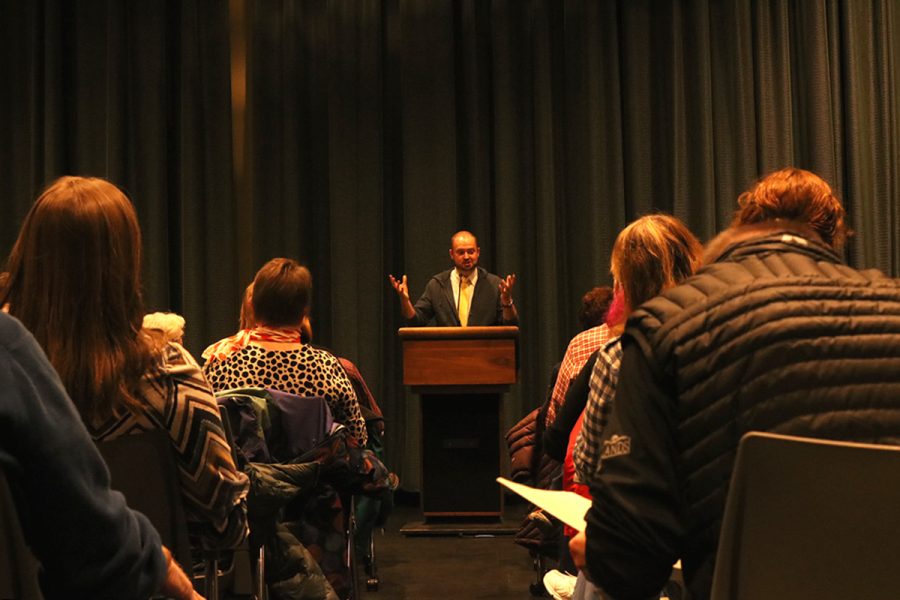 Eric Rasmussen, the editor of Barstow & Grand, introduces many of the night’s featured writers.

The windows of the pristine Pablo Center at the Confluence showcased the faint sunset. Pink faded into a jet black darkness as the writers came out to read their work.

Thirteen individuals read their literature — whether prose or poetry — on Tuesday at the release of the second edition of Barstow & Grand. Barstow & Grand is a journal that comprises the work of local Chippewa Valley writers. Among the poets reading their work was Max Garland, a UW-Eau Claire professor of English.

“I’ve lived here for 28 years in Wisconsin,” Garland said, with a grin slowly spreading across his cheeks as he prefaced the piece he chose to read. “This is the only poem I’ve ever written in a bar.”

Barstow & Grand appeals to more than just writers, however, through the artistic graphic design of the front cover of the newest edition.

Sarah Ferraro, a fourth-year art student at UW-Eau Claire and the designer of the cover, said that the experience of creating the cover allowed her creative freedom as an artist.

“It was all open-ended,” Ferraro said.

The cover depicts icons that writers can easily connect to, such as pencils and typewriter-font text.

“The writing world and the art world are so not together sometimes,” Ferraro said. “They should be.”

Eric Rasmussen, editor of Barstow & Grand and UW-Eau Claire alumnus, said that Barstow & Grand had its beginnings three years ago when professor BJ Hollars threw out the idea of the publication along with his work with the Chippewa Valley Writer’s Guild.

“Issue 2 feels like a step in the right direction,” Rasmussen said. “This time we definitely branched out.”

From politics to spookiness to rural poetry, Barstow & Grand has a diverse assortment of literature that can appeal to many different reading preferences.

Olivia Gregorich, a theater arts enthusiast, playwright and recent Lawrence University graduate, said she discovered the publication through a friend, who encouraged her to submit her work.

She said her piece subverted common clichés about poetry — that it has to be darker. She said she feels strongly about climate change and environmental issues, and so these themes surfaced in her writing.

“I really delight in writing humor,” Gregorich said. “I can do dark, but I feel a little wrist-wringing about it.”

She stressed the importance of aspiring writers sharing their work with others and how writing does not occur in a vacuum.

“Get it out to people,” she said, referring to literary work in progress. “That was kind of a discovery for me.”

John Paluta, a third-year creative writing and public relations student, said literature and literary events are a vital part of the Eau Claire community, particularly for aspiring writers and artists.

“I think it’s an admirable goal to assemble a group of writers who are connected to the Chippewa Valley and publish them in a book together,” Paluta said.

He also said the collaboration of the art community is important.

“It’s through sharing and reading other people’s works that we become better writers,” Paluta said.

Mennecke can be contacted at [email protected]