Govin’s Farm: A Cornucopia of fun 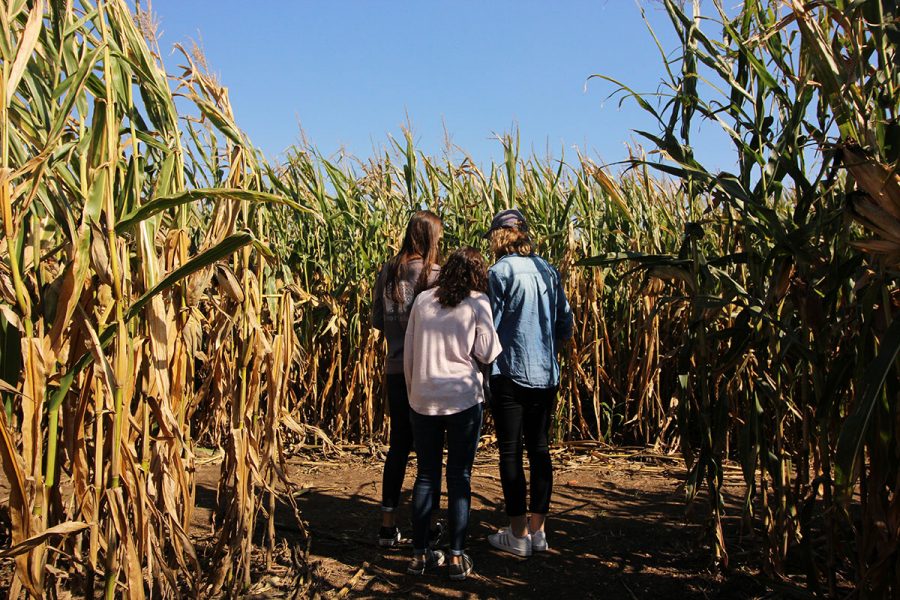 Govin's farm boasts a variety of fall activities, but the main attraction is its corn maze.

As the leaves begin to reveal their autumnal colors, Govin’s farm has once again transformed into a family fall favorite: Govin’s Corn Maze and Pumpkin Patch.

From now until Oct. 28, people of all ages are encouraged to partake in some of the more than 25 fall activities at Govin’s farm.

By the concessions stand, visitors have access to the jumping pillow, mini golf, pig races and corn hole. After a quick wagon ride over to the corn field, visitors can use the hay jump, hamster wheel and the pumpkin cannon.

The biggest draw to the farm is the 11-acre corn maze. This year, the corn maze’s design celebrates the Green Bay Packers’ 100th season.

Before heading into the maze guests can pick up a list of trivia questions, ranging from entertainment trivia to corny knowledge, that help guide them through the twists and turns within the corn stalks. For an extra challenge, on Friday and Saturday nights visitors can attempt the maze at night by flashlight.

For guests who find themselves getting stuck in a part of the maze, there are “corn cops” whose job is to help guide visitors to the next checkpoint.

Emily Flaten, a first-year employee at the farm, said being a corn cop is her favorite position to work in. After coming to the maze as a child, Flaten now works around Govin’s in positions ranging from supervising the jumping pad to helping out as a corn cop.

“Growing up, I always had a good time here,” Flaten said. “I took the job because I heard [Govin’s] needed help.”

Bruce Ludwitzke, a first-time attendee, said he enjoyed finding his way through the maze. However, he found that for his kids, the fall-themed activities were the highlight of the day.

“We had a lot of fun,” Ludwitzke said. “The maze was my favorite, but the hay bale jump is definitely the kids’ favorite.”

For attendee Sheila Stewart and her grandchildren, their trip focused more on the fall festivities than the corn maze itself.

“We didn’t do too well with the corn maze,” Stewart said. “We got stuck and ended up coming out through the ‘in’ door!”

Stewart’s grandchildren were more than happy to spend their time jumping off the hay jump and watching others use the pumpkin launching canon. Her granddaughter, Jada, spent her time making snow angels in the corn box and burying others in its corn kernels.

Each year activities continue to be added to Govin’s farm. This fall a Gaga ball pit was built just outside of the corn maze.

Brandon Bonnerup, an employee who is now on his third year working at the farm, said the fall festivities have yet to grow old.

“Every season there’s something new,” Bonnerup said. “It keeps it interesting. Govin’s is just a fun atmosphere.”