A total of 40 bicyclists came from all around the Eau Claire area participate in Tandemonium! 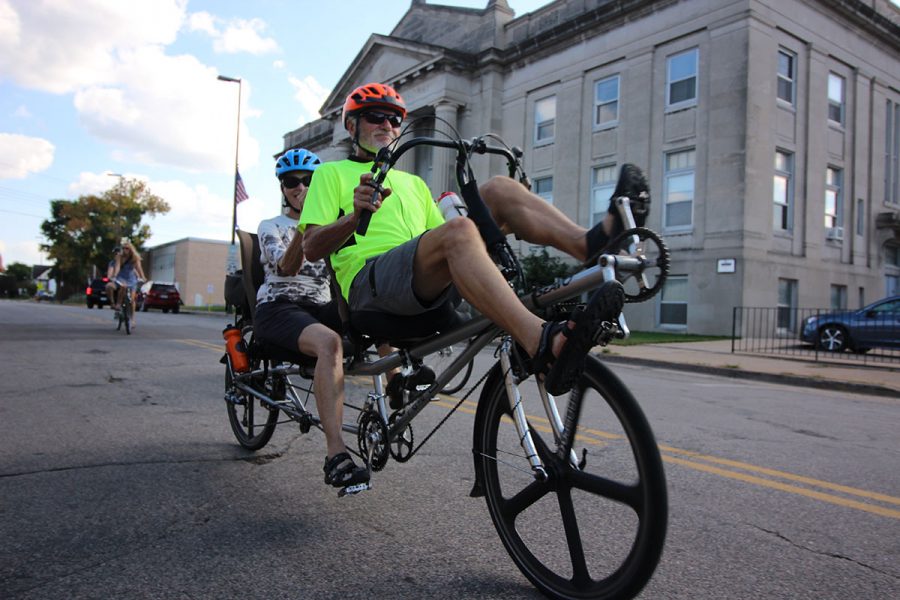 There were about 40 people in attendance at the beginning of the ride, which included about 10 tandem bicycles. All kinds of cycles were welcome – “one-seaters, tagalongs, and unis welcome too!” – according to the flyer posted around town.

Before the Tandemonium! began, participants lined up their cycles outside of SHIFT for the coffee bar’s signature liège waffles, which were included with the $10-per-bike ticket price.

The group ride followed a seven-mile route around Eau Claire, according to Josh Garcia, a barista working at SHIFT during the event.

Mikkel and Carol Gardner, a couple from Frontenac, Minn., were at SHIFT for the event. The couple said they were new to tandem biking.

“We just purchased our tandem used a week ago, and we have been biking around our neighborhood,” Carol said. “We’ve also been biking on the Cannon Valley Trail, which is near where we live.”

Along with purchasing a tandem bicycle and learning how to ride it, the couple learned some tandem terminology in preparation. Mikkel rode in the front seat as the “captain,” and Carol was the “stoker,” or took the back seat.

The couple said that they were excited for the ride, but also cautious.

“Here’s your headline,” Mikkel said. “‘Wife will not let husband have beer prior to Tandemonium! Husband is complying.’”

Mikkel had his beer – which was also covered in the ticket price – at the Oxbow Hotel and Lakely after he was relieved of his duties as “captain.” The pair successfully made it to the finish line without falling, Mikkel said.

Other things featured at the end-of-the-ride party at The Oxbow Hotel and The Lakely were signature tandem-themed cocktails made for two, games, live music and prizes awarded for Best Couples Costume, Best Modern Tandem, Best Vintage Tandem and more. SHIFT also had a tent set up at the end point for tune-ups after the ride.

Sean Brandenburg, a co-owner at SHIFT, said he felt the event was a success. Thanks to the pleasant weather and route – which went through Carson Park and over a few bridges – he said the event was enjoyable. Brandenburg also discussed his vision of where the event could go in the future.

“This is the first year. We want to kind of grow the event over the next couple years,” Brandenburg said. “We want it to be an annual thing, and we want it to be kind of a regional thing where people put it on their calendars and are like ‘oh, we’re going to go to Eau Claire for Tandemonium! and spend the weekend there.’”