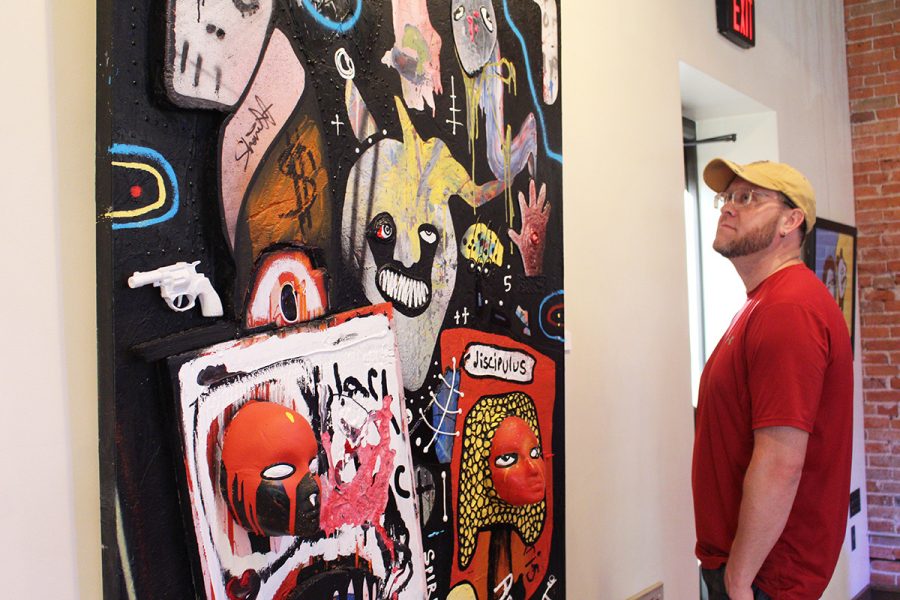 Fischer’s work, which uses a wide range of artistic mediums, will be on display until June 23.

The walls of the Volume One gallery were covered with eccentric street art of all shapes and sizes, created by local artist Gabriel Fischer. Spray, oil and acrylic paint, on wood panels and canvas, were the primary mediums. Some works utilized unconventional artistic mediums like dirt, “found objects,” glass, Styrofoam, rags and insulation.

Each piece displayed funky characters — with a wide range of expressions — painted in black, with accents of striking yellow, red, pink, green and blue. Some pieces were made up of simple, solid lines while others were a collision of shapes, words, splatters, drips and smears. Some had a 3-D aspect, while others were purely paint. There was also a paper mache-esque statue in the corner of the gallery.

“I want my work to be whatever the viewer needs it to be,” Fischer said in an artist statement hanging on the right wall near the gallery entrance. “Pictures and objects can mean so many different things to each person. Just because I made these pieces, doesn’t mean that my thoughts about them are the right ones. I will say this though, if my work can help someone feel like they aren’t alone or they have a sense of hope, I have done my duty. You are loved. Feel what you feel and be free. Be yourself.”

Fischer said some of the work on display has been in progress for the last two years, while others took him months to create. If he had to describe his work in one word, he said it’d be “messy.”

The gallery title was chosen because of Fischer’s consistent attempt to connect with childlike innocence through his art, he said. Fischer said he felt the title “Smile, Buddy, Smile” had a pure connotation.

While his piece “Untitled IV” has been in the store before, Fischer said this is his first show at the gallery. He said it means a lot to him and allows him to share his work with a larger audience.

Hannah Martinson, a first-year student at UW-Eau Claire and sales associate at The Local Store, said Fischer’s art is unlike any she’s seen before.

“I think that’s what makes the Local Store so great,” Martinson said. “We always try to feature someone that’s different and kind of switch it up.”

Martinson said she enjoys the vibrant colors, the painting techniques and 3-D aspects utilized by Fischer. She also said she appreciates Fischer’s emphasis on audience interpretation.

Fischer, who has been making art at a larger scale for around three years now, said he attempts to approach art in an unconventional manner. While working in a dirty warehouse, he got the idea to dip a broom in paint and drag it across the floor. The use of dirt is meant to add texture to his work, he said.

Some pieces also had shards of glass. Fischer said the glass came from a piece he’d been working on that was dropped, and when it shattered he decided to incorporate it into his other works. One piece featured a “found object”: A small plastic white pistol.

Sekaidah Rogers, a community member and frequent gallery visitor, said she’s loved Fischer’s work for quite some time now. She said she has a couple of his pieces in her home.

“There are so many different things that he uses, so many types of expression, I have always been really drawn to his style,” Rogers said.

Fischer said he finds inspiration everywhere, but mostly from sad and spiritual things. In terms of the future, Fischer said he thinks “the bigger the better.” He said he hopes to complete more murals and installations.

All in all, Fischer said art means everything to him. He said it functions as “a medium for truth, another tool to use in your journey to whatever you think the end it. Or the beginning.”

Fischer’s work will be on display at the Volume One gallery until June 23.