Acoustic duo The Sixes takes on The Cabin 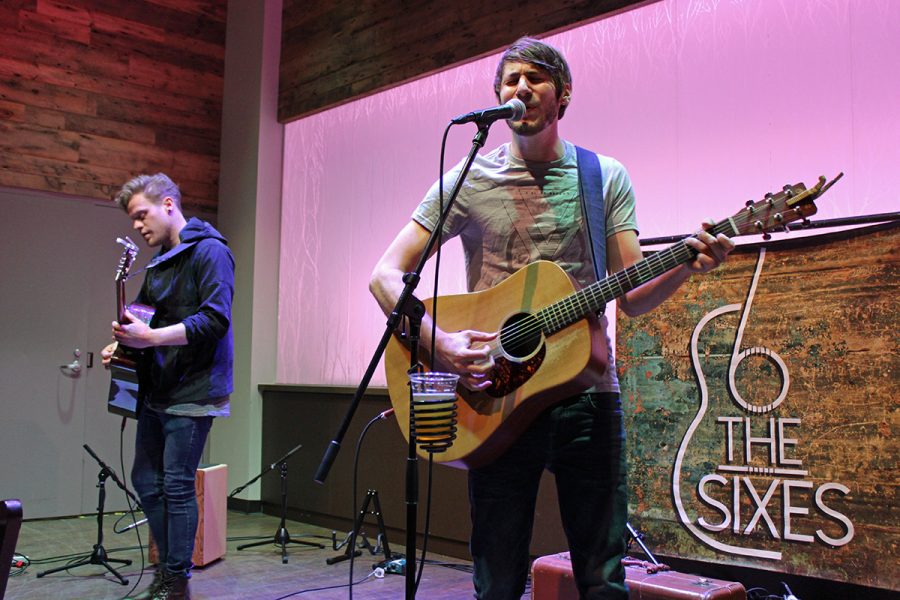 Dwayne Thomas and Gordon Altizer have been working together musically for four years.

It was another Friday night at The Cabin in Davies Student Center.

Two guitars, one mic, a suitcase-turned-kick drum and a Cajon were poised on The Cabin’s stage, waiting patiently for their owners to join them. Attendees sipped on coffee and beer as The Sixes took the stage.

The music of the acoustic duo, which features Midwest musicians Dwayne Thomas and Gordon Altizer, filled the dimly lit and cozy room as fireplaces warmed the surrounding atmosphere. The audience members tapped their feet to the smooth beat.

This wasn’t the Sixes’ first take at a Cabin concert. Thomas, the duo’s singer, lead guitarist and primary songwriter, said the pair performed there in 2016.

Their set comprised a combination of original and cover songs. Some of their covers included Tina Turner’s “What’s Love Got to do With it” and Oasis’ “Songbird.”

Thomas said he said finds inspiration for lyrics in daily life, be it his own or the lives of people close to him.

“The emotions that come from life, that’s where it stems from,” Thomas said.

Music from the late ‘90s and early 2000s also functioned as inspiration for the duo. The music he listened to while growing up is what made him want to play music, Thomas said.

“It’s a lot of everything,” Thomas said. “We play a good mix of a lot of different genres all wrapped up into one.”

Jack Bertelsen, a senior integrated strategic communication and advertising student at UW-Eau Claire, said that while he hasn’t personally attended many Cabin concerts, he appreciates what the venue offers.

“They usually bring in pretty consistently good artists,” Bertelsen said. “I like that The Cabin tries to represent Eau Claire a little bit.”

Regarding The Sixes, Bertelson said he overall enjoyed the duo’s acoustic sound.

Thomas and Altizer have been performing together as The Sixes for around four years now, Thomas said. However, the pair had musical experience — both together and individually — prior to the creation of the duo.

About ten years ago, Thomas said the two were a part of an alternative rock band. The band was together for four years but eventually broke up. After going their separate ways, Thomas said he and the other members all took a musical break for a year.

It was during this time, Thomas said, that he got the idea to start an acoustic group.

“Gordon has always been my right-hand man as far as writing music and stuff,” Thomas said.

The duo frequently performs at breweries and wineries, Thomas said, but they perform wherever they can — be it at a coffee shop, a bar or at actual venues. The Sixes have performed all over Minnesota and Wisconsin, and a few times in Iowa.

“The best part about what we do is the versatility,” Thomas said.

Both have a love for performing, Thomas said. He personally said he enjoys the feeling he gets when he performs, “the release” and the overall energy. He also said the connections he makes with others, a connection made possible through music, is special.

“When somebody comes up afterwards and says ‘I really loved this song, and it meant a lot to me,’ that’s what it’s all about,” Thomas said.

The pair, via what Thomas called their “Merch Box,” was handing out their first EP, as well as coozies and other promotional merchandise. There’s also a Facebook page and a YouTube page for The Sixes.

In the four years they’ve been together, Thomas said that The Sixes have released four EPs. Right now, the duo is working on their first full-length album. The album release is planned for the end of the summer, Thomas said.

Music, for Thomas, means everything, he said.

“It’s something I can’t stop doing,” Thomas said. “Even that one year that I didn’t make music, in my head I didn’t think I’d ever go out and play live again, I thought I was over it, but it always comes back around. It’s something I’ve always loved to do, it’s a part of me.”