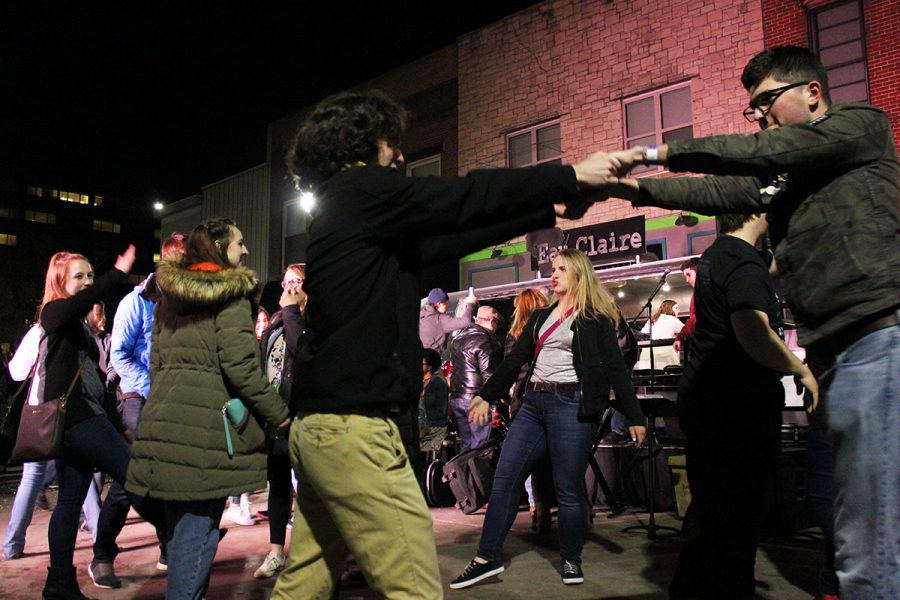 Thousands of visitors came out to watch local artists perform all around downtown Eau Claire on Friday and Saturday.

On Friday night, the streets of downtown Eau Claire came to life with the sounds of live music, the energy of carefree dancing and the excitement of hundreds of spectators. Eau Claire’s 52nd annual Jazz Festival had returned.

The yearly two-day event is the United States’s largest student-run festival, providing dozens of local, national and international artists with the opportunity to showcase their music, according to the Jazz Fest website. It serves as a way to promote jazz and entertain the community with live, soulful artistry.

Brieanne Vasterling, a first-year business management student at UW-Eau Claire, said she has attended Jazz Fest for the past few years.

“I’m a really big part of the music program in Haas, so I kind of came down to to support a couple peers,” Vasterling said. “It’s a great atmosphere.”

Vasterling said Jazz Fest has only gotten “bigger and better” over the years, drawing in a lot of young performers and community members with common interests.

“You know everybody’s here for the same thing,” Vasterling said. “It’s like one of those things where even the strangers are kind of like a friend, almost.”

Mason said Jazz Fest was Yooth Group’s first “real gig,” explaining that the band began with Dittrich and herself about a year and a half ago. She said Zirnhelt joined the pair last semester, while Larson finally completed the group last month.

“I think (Jazz Fest) allows us to appeal to an audience we wouldn’t necessarily normally appeal to,” Mason said. “For example, I saw my music history seminar professor walk in, in the middle of it. So, I mean, there’s no way she would’ve gotten to one of our gigs at a party.”

Despite the sudden appearance of a live bat midway through their performance, Yooth Group managed to draw in a crowd that consistently packed the 410 Cafe throughout the evening. The band members said they were pleased with their performance, despite experiencing some nerves beforehand.

“It took a couple songs to get into it,” Dittrich said. “But it allowed us to get our name out there and it gave us some experience being in front of people.”

Dittrich said Yooth Group’s next scheduled performance is on Oct. 12 at The Cabin in Davies Student Center. The group said they would like to return and perform at Jazz Fest again in the future.

“It’s honestly really fun,” John said. “It’s really reflective of Eau Claire’s art scene and our music scene, it’s a celebration of the successes of the jazz program at UW-Eau Claire, and it’s very welcoming to all ages — it’s a good family event.”