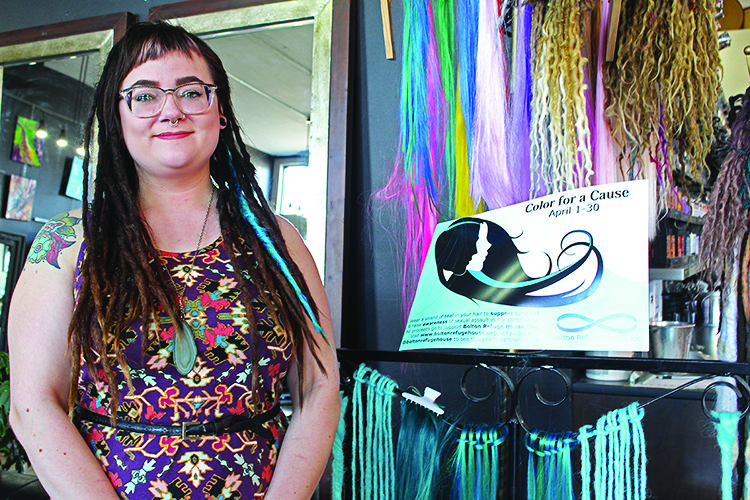 Tanya Potter, a hairstylist at Saylon Seven, which is one of three participating salons, has one of the teal extensions in her own hair.

The month of April is Sexual Assault Awareness month. To spread the word and create a community of support, Bolton Refuge House, Inc. in Eau Claire is leading the “Color for a Cause” campaign. The campaign runs from April 1-30 and involves the insertion of teal extensions in the hair of sexual assault and domestic abuse allies and survivors.

Kaylie Hetzel, a recent UW-Eau Claire graduate and community relations intern at Bolton Refuge House, said that as a part of the campaign, the organization has partnered with three local salons: Saylon Seven, The Hair Shoppe and Trendsetters. The teal hair extensions are $10, and all proceeds go to Bolton Refuge House, Hetzel said.

Hannah Tormey, a senior women’s studies student at Eau Claire with a certificate in LGBTQ studies, said she’s working with Bolton Refuge House during the “Color for a Cause” campaign to complete her capstone project.

Tormey said she and another student, Elizabeth Nelson, have been working with Hetzel and Bolton Refuge House on the campaign since March.

In order to get the ball rolling, Tormey said they researched all of the salons in the area, made phone calls, explained the cause and how the salons could help out. The three that immediately agreed were Saylon Seven, The Hair Shoppe and Trendsetters.

Hetzel said the three salons have participated in the campaign, which is in its fourth year, in the past. This year, however, Hetzel said they’re trying to expand the campaign to more salons and even diffuse the campaign into nearby counties like Jackson or Buffalo county.

“As years go on, there seems to be more publicity and awareness, which is great,” Hetzel said.

“We want to help people get their lives back into their own hands rather than in the hands of their abusers,” Hetzel said.

Hetzel said teal is the color that represents the cause of sexual assault and domestic abuse awareness.
The cause revolves around hair extensions because hair is something everyone can see, Tormey said, and people tend to get their hair done in order to feel better. Hair care is a form of self-care, she said. Another part of it, she said, is that hair stylists also often build good relationships and have open conversations with their clients.

“We just want to show the prevalence of people that are affected by sexual assault whether it be as allies or survivors,” Tormey said.

Hetzel said similar things, reiterating that the visibility of hair and the supportive relationships built between hair stylists and their clients were driving factors in the decision to create a campaign focused on hair extensions.

“A lot of people are scared to speak out and don’t really know who to talk to. If you don’t have that strong support system it’s very isolating,” Hetzel said. “So, it’s not just a fundraiser, it’s not a big ‘come to this event’ kind of thing, it’s just supposed to be a subtle reminder to people that are suffering that there are people here to listen to their stories.”

Sexual assault and domestic abuse are extremely prevalent issues, Tormey said. Recent attention has been drawn to the issues — especially with movements like the #MeToo and #TimesUp campaigns happening in the public sphere — but more needs to be done, she said.

The rampancy of sexual assault and domestic abuse is why she decided to dedicate her capstone project to the “Color for a Cause” campaign, Tormey said.

“A lot of people are affected by it,” Tormey said. “People always say we’ve come so far but honestly, I mean, everyone that I know has been affected by sexual assault in some way. I think that’s truthful to most people.”

All in all, the goal is to create a sense of community and a web of support for sexual assault and domestic abuse survivors, Hetzel said.

“The hair extensions let everyone that you encounter know that you’re there to support and listen to them,” Hetzel said.