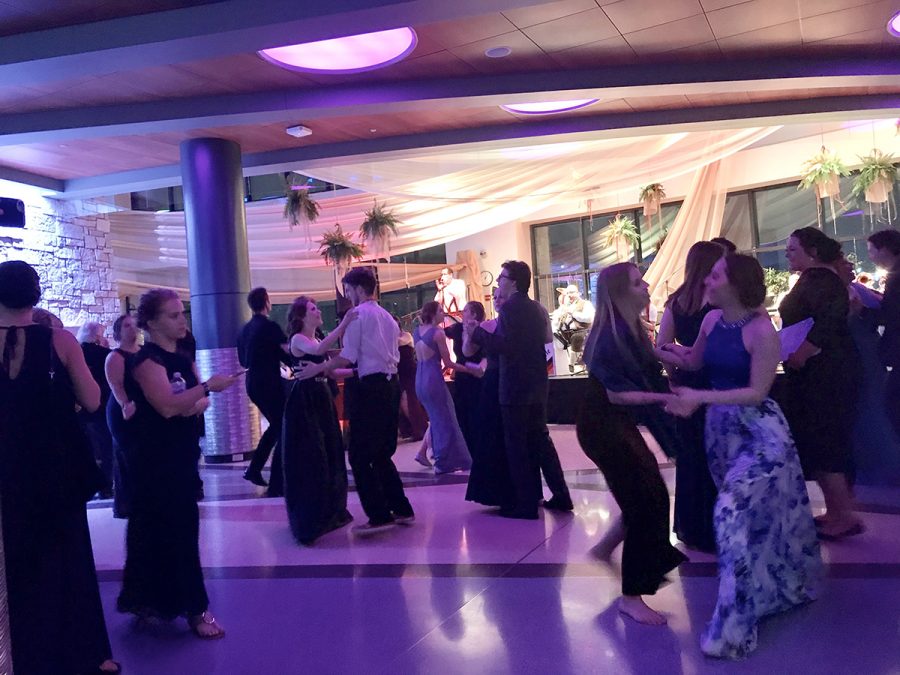 Every year in April, the UW-Eau Claire Davies Center undergoes a major transformation. Drapery is hung, platters of traditional food are set out and drinks are poured. By Friday night, the building is full-to-bursting with the swish of elegant ball gowns and the lively tune of polka played by the University Symphony Orchestra.

The entire building becomes virtually unrecognizable, all for the annual Viennese Ball — the largest outside Austria itself.

While most students know about the existence of the Viennese Ball, there are some who immerse themselves in the experience year after year.

Olivia Willett, a senior music education student, said she’s attended the ball eight times. Over the years, she’s performed from within a variety of musical groups, including the Women’s Concert Choral (WOCO) and jazz band.

She said while the Viennese Ball is an event the entire community, young and old, enjoy, it is also special for students involved in music.

“It’s something that the music majors hold very dear to their hearts,” Willett said. “Because it’s so fun.”

The Singing Statesmen and WOCO opened the 43rd annual Viennese Ball this year, while the University Symphony Orchestra, Jazz Ensemble I and various local, faculty, and student musical groups were given the spotlight in various locations throughout the building.

Attendees were given the chance to swing dance, polka, waltz and sing along to the myriad of musical performances, which have been taking place without fail since 1974.

Matt Miller, a senior music education student, said the Viennese Ball tradition is something music students are very attached to.

“As a whole, I think the music department gets really psyched about this,” he said, “Not only because we get to perform, but because it’s tradition.”

Miller has participated in the Singing Statesmen, Concert Choir, and a cappella groups in his years at Eau Claire. He has, like Willett, been to the Viennese Ball eight times.

His favorite parts of the ball every year are performing and singing Piano Man at the end of the night at the piano bar.

“Having the tradition over and over again, doing all the same stuff, is a really nice feeling,” Miller said. “It’s just nice to enjoy what is essentially a party with all your friends.”

The Viennese Ball is loosely modeled after “A multi-roomed New Year’s Eve extravaganza in the style of Emperor Franz Joseph and Empress Elizabeth’s ‘Ball at Court’” called the Kaiser Ball, according to the Eau Claire website.

Willett said while the ball is special to music students, it is also a great community-builder with the general public.

Maya Fabian, a senior music education student and the president of WOCO, said this year, her fourth attending and performing at the ball was “just really sentimental.”

“I’m extremely grateful to have this V-Ball experience because you wouldn’t have it at any other university and it is so special,” Fabian said.

Attending a choir trip to Austria last year added an additional layer of appreciation for the ball, Ellie Davis, a senior elementary and Spanish education student, said. It is Davis’ ninth semester participating in WOCO.

Music students end the night by “storming the stage,” gathering around and singing Piano Man at the piano bar with current and alumni music students, Willett said. It’s one of the defining traditions of being a being a music student at the Viennese Ball.