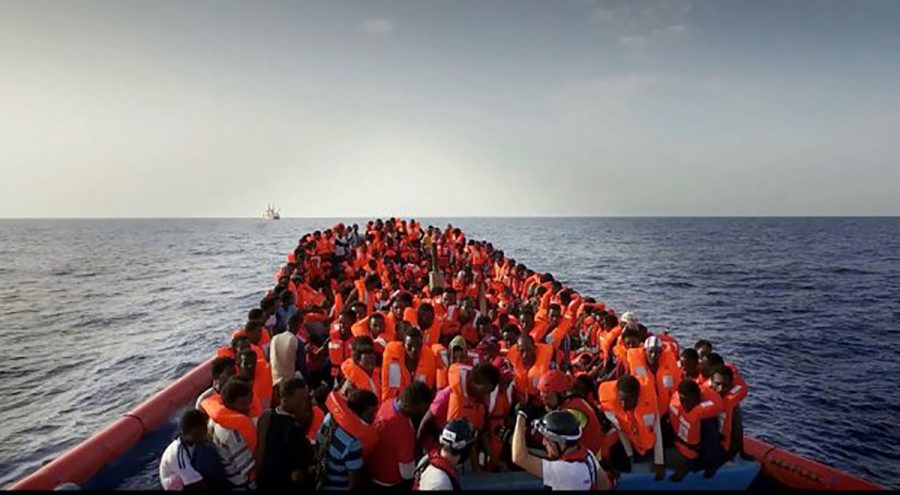 "Human Flow" gives an inside look to the lives refugees live.

The film “Human Flow” follows refugees from all over the world, telling stories of the difficult lives these people are forced to live.

The images in the film remove the distance people feel when they hear stories of the suffering refugees experience. The images displayed on screen paint a picture that is normally hard to envision within the prevalent discussion of refugees.

Over 65 million people who are forcibly displaced from their homes to escape war, famine and/or lack of resources, according to the film, are commonly left with no place to settle.

The documentary shows the camps and makeshift villages that refugees call home in 23 countries. Within the year it took to film, Ai Weiwei, the director, asked refugees to share stories of the struggle to find safety, which is a continuous threat to them.

Facts throughout the film show the problems refugees face and the number of people affected. Ai Weiwei also uses facts to reveal how long the displacements have been going on around the world.

Through the journeys of those who have managed to find community villages, the film shows people in different countries experiencing similar, if not the same, struggles of not being able to provide much for themselves.

Refugees fight threats — of countries closing their borders, the lack of resources, climate change and wars that destroyed many cities and homes — in search of better lives.

The film shows interviews of world leaders like the princess of Jordan. Jordan is a large host country for refugees, according to the film, and the movie shares refugees’ stories of day-to-day life and their hopes for the futures of themselves and their families.

The documentary shows startling images of the number of people affected by and of the living conditions caused by displacement.

Footage of boats crammed with refugees, tents that serve as their new homes and the oppression inflicted by border control to keep them from getting through closed borders depicts the horror that not only adults but also children face.

“Human Flow” shows hard-to-watch scenes in a tasteful and respectful manner that allows for viewers to understand the struggle refugees face without making it difficult to continue watching.

The insight into actual refugee lives allows people far from that reality to experience the turmoil some face daily.

Weiwei’s capture of the surroundings where the numerous people are forced to dwell is what connects refugees’ situations from all over the world and portrays them as people who have fought for themselves and have come so far even if they still struggle.

In the film, Weiwei interacts with refugees and works to create relationships rather than just film them for the sake of making a movie.

The documentary shares information while bringing humanity to those affected by the refugee crisis.