Lambing Barn is open to the public for one more weekend 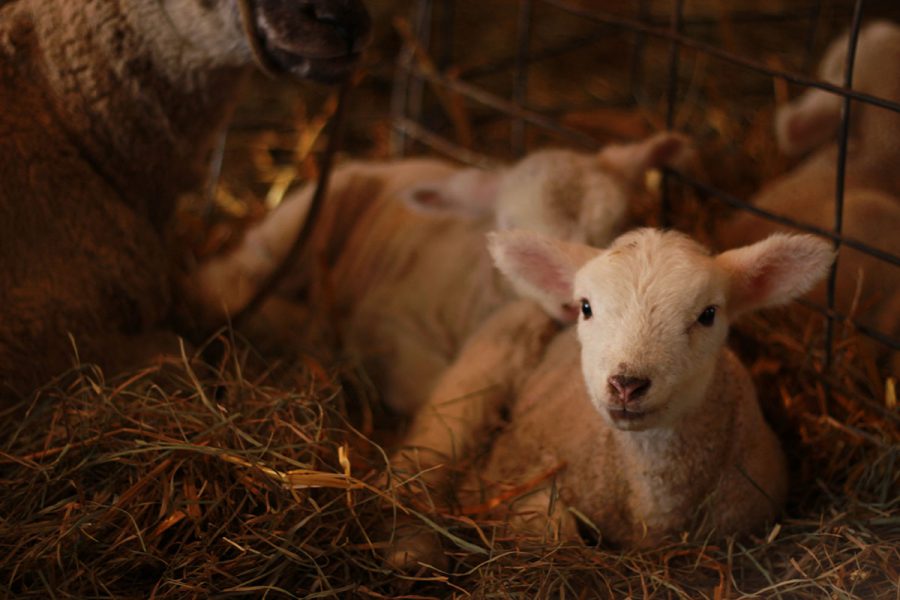 Baby farm animals can be visited and held at Govin’s Farm in Menomonie.

On an isolated farm outside of Menomonie, the scent of hay and fresh kettle corn carries with it the promise of spring. Children squeal in glee and families gather around newborn animals with looks of excitement and wonder. This is the beginning of springtime at Govin’s Farm.

Every year, Govin’s opens its lambing barn to the public for the last two weekends in March, and the first two weekends in April. For a price of $7.82, visitors are able to look at, pet and even hold lambs, goats, chicks, piglets and various other types of barnyard creatures. As it says on the Govin’s Farm website: “If it fits in your lap, we will help you hold it.”

After visiting with the animals, guests are able to enjoy warm bags of kettle corn or other tasty treats. While enjoying these treats, visitors can watch wool crafters work and create. Kids are encouraged to take pony rides, get their faces painted or climb on a tower of hay bales.

Govin’s Farm is owned and operated by John Govin and his wife. The Govins purchased the property in 1989, originally running it as a dairy farm. Govin said they have been opening the lambing barn to the public for 13 years now, and the farm brings in thousands of visitors every year.

“It’s a great way to experience spring,” Govin said. “I think attractions like this are popular because people crave to get back to agriculture and get back to nature, because they’re so removed from it.”
Caring for about 500 animals, Govin said the farm’s biggest attraction would be its newborns. He has observed that little kids are most drawn to the baby chicks, while the bigger kids like the goats.

“This is a farm for everybody,” Govin said. “We have grandparents come with their grandkids or without them. We have college students on dates. We have, of course, a lot of families and small children.”

Andrea Bourget, a farmhand at Govin’s, has been working there for about five years. Though Bourget has observed little change over the years, she said this year’s unpleasant weather has led to a decrease in visitors.

Bourget’s current role at Govin’s is to work the goat pen — a job she said she really enjoys. Bourget said she plans on continuing to work at Govin’s, as she cannot imagine not coming back.

Gabi Alioto, a second-year communication sciences and disorders student at UW-Eau Claire, visited Govin’s Sunday afternoon with a friend. Alioto said she had never been to Govin’s Farm before, but it seemed like a “super fun Sunday adventure.”

“I thought it was really fun,” Alioto said. “There was a lot to do and there were many different animals that we got to see.”

Alioto said her favorite part of her visit was interacting with and holding the animals, which is more exciting than simply looking at them. She said she would highly recommend visiting Govin’s farm, as it “presents a great opportunity to have a fun day.”

“Animals are appealing all times of the year,” Alioto said. “I definitely will be returning.”

Govin’s next public event will be strawberry picking in June. Until then, Govin would like to encourage everyone to “come on out to Govin’s,” as there is only one weekend left of the lambing barn.